The last time we looked at Fernand Khnopff's In Fosset. Still Waters, (January 31, 2011) I mentioned the impact the painting made when it was shown at the Vienna Secession in 1898.   Another Khnopff landscape, In Fosset. Under The Trees has had an even longer half-life.  Gustav Klimt made several pcitures under the influence of its stylized vertical tree trunks, notably Birch Forest. Buchenwald I (1901, Dresden Gemmaldegalerie) and the photographer Albert Renger-Patzsch became obsessed .   Philippe Roberts-Jones, like Khnopff a Belgian, was the first to point out  the similarity between Khnopff's forest and Rene Magritte's Leader of the Pack (1955),  dominated by an impossibly large, nut-collecting squirrel. 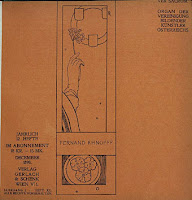 The ideas in Fernand Khnopff's paintings were often presented like Zen Koans, in a form inaccessible to the rational mind. Paradoxically, this held true even when, as he often did, Khnopff created and named his images for the works of writers he admired.

Khnopff's work was the star of the first Viennese Secession in March of 1898, which also included mixed-media sculptures like the Head of a Young Englishwoman which was bought by Adolphe Stoclet,  a Belgian engineer,  in Vienna to supervise some railroad construction.  Stoclet, who came from an artistic family, (he was a nephew of painter Alfred Stevens) met architect Josef Hoffmann on that trip.   Today Stoclet's name is remembered for his commission of Hoffmann to design a new home in Brussels - the Palais Stoclet.

Another Khnopff sculpture, Vivien, stayed in Vienna, purchased by the Belvedere Galerie.  It depicts a character who is a thief of hearts,  embodying  two of the artist's preoccupations - Anglophilia and woman as femmes fatales.  Lilie Mauqet, who modeled for Diffidence, was one of three sisters from Glasgow whose Pre-Raphaelite looks appealed strongly to Khnopff.   The Anglophile Khnopff even went so far as to rearrange the branches on his family tree to give greater prominence to the English in his background. 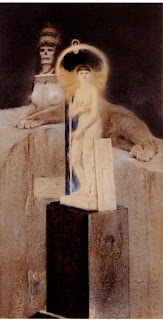 “(W)e who seem to desire one another, my sister, we recognize each other.
Yes, you are my sister since you recite softly the hymns of the unreal that I chant at the top of my voice.  Yes, you are my sister, because you have not hearkened to the mortal stammerers of love and the gross jolts of women…
Sisterhood, incest, virtue or sin, assumption or fall, whatever shall be the fate of our love, new born that it may raise over us a mystical aurora…
Be my sister…If incest one day comes to join our mouths, we will have at least made the effort of a grand fate, and we will have fought, before our downfall, against the earth and instinctive force…” - excerpt from Istar.

Attempts to understand Khnopff's intentions  always remain incomplete.  When Khnopff was interviewed in Vienna by Ludwig Hevesi in March, 1898, he complained that "everyone classified me as a Symbolist, they claimed to find a hidden meaning behind everything I made."  A disingenuous comment from an unreliable narrator.  From Charles Baudelaire, a poet admired by Khnopff, these lines that serve to get at the fascination Khnopff's work continues to exert.

" We cannot but arrive at this truth that everything is hieroglyphic...Well, what is a poet - I take this word in its widest sense - if not a translator, a decipherer?"

What does With Verhaeren. An Angel  look like from this perspective?  There is an angel od androgynous appearance, a Wagnerian figure with strong features and a closed ecstatic expression.  Interpreting Khnopff can be a tricky business.

In Fernand Khnopff, the Viennese found much to admire.  His quixotic mixing of sacred  imagery,  symbolic decadence, and an unsettled attraction to modernity was just what their new movement was looking for.  For Khnopff, the triumph must have been especially sweet;  his family had been raised to the aristocracy by the Hapsburg Emperor in 1621. 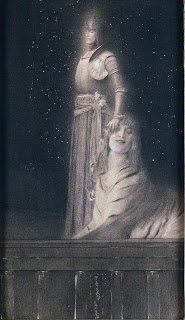