In Vienna. The Glasgow School 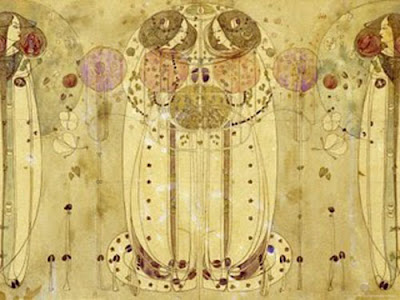 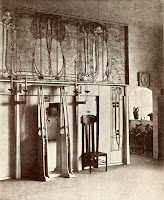 How  the group of artists known as the Glasgow School became the talk of the Eighth Secession is also a story of Josef Hoffmann.   The Viennese architect produced  the exhibitions of the Vienna Secession in its early years and, although we may not realize it, he invented the "designed" exhibition. What better way to show the work of a group of artists than through a multi-media installation?

The Glasgow School had designed several  stylish tearooms, spaces where women could socialize in public.  Margaret Macdonald, Frances Macdonald,  Charles Rennie Mackintosh,  and Herbert McNair , two sisters and their  husbands, were known collectively as 'The Four.'   The Mackintoshs were the leaders, Margaret specialized in painting and glass art; Charles was an architect.

Several times Josef Hoffmann had visited England to study the Arts & Crafts  design and it was his invitation that brought the Glasgow group to Vienna.  The tearoom installation at the Eighth Secession used furniture designs from their Argyle Street Tearoom, including the Mackintosh 'rose' high-backed chair.  Critics and the public agreed in their praise of its airy charms  and, as happened with Fernand Khnopff's work  in 1898, local museums and collectors bought.  Interestingly, The Seven Princesses - after Maurice Maeterlinck now in the Museum of Applied Culture, Vienna predates Margaret Macdonald Mackintosh's masterly  Mysterious Garden (Scottish National Gallery). 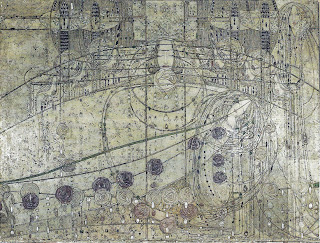 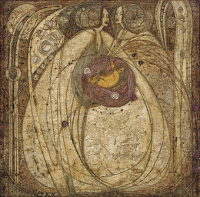 Critics are still debating how much the visiting Scots influenced Viennese modernism but by 1900 the curvilinear style had become  like the child who doesn't realize how tired she is and keeps on running around until she drops.  The salutary effects of applied geometry were ready to make things new again.  This time to be mixed with elements of  medieval revival and recently discovered  Japanese arts of the floating world.

Living in Vienna myself, I always love reading your posts about "my" city but this one is particularly dear to me because my sister actually lives in Glasgow :-)

(And though it's probably considered high treason in these parts, I must confess that I prefer the Glasgow Four over Klimt, Hoffmann & C. anytime...)

Muchas gracias, El. Soy feliz que usted lo quiso (I hope I got that right - I meant to say that I'm happy that you liked it.)

Historienenrrant, a lucky thing for you that Hoffmann invited the Scots to Vienna and that museums bought their work. Vienna - the zoo - has pandas so, in my opinion, you are doubly lucky. I think the Chinese will be sending a pair of pandas to Scotland next year, too.