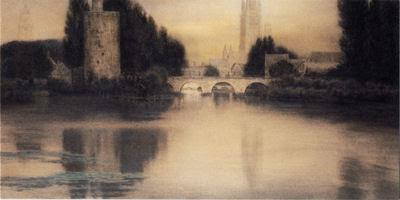 "Phantom city, mummified city, vaguely preserved.  It smells of death, of the middle Ages, Venice, in black, the customary ghosts and the graves." - excerpted from A Walk In Bruges by Charles Baudelaire from Pauvre Belgique, 1864 - reprinted by Editions L. Conard, Paris. .

"In Bruges a miracle of the climate has produced so mysterious chemistry of the atmosphere, an interpenetration which neutralises too-bright colours, reduces them to a uniform tone of reverie, to an amalgam of greyish drowsiness." - excerpted from Bruge-la-Morte by Georges Rodenbach, Paris: 1892

When the subject is Bruges, metaphor is everything.  In the paintings of  William Degouve de Nuncques and the novels of  Georges Rodenbach atmosphere has the force of nature. But what is a force of nature and where is the line that separates it from human endeavor?  These are not questions that metaphor can answer.  According to Arthur Rimbaud, the French would have been second rate Symbolists without the Belgians. 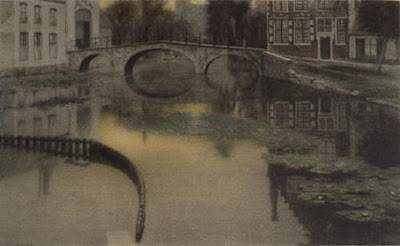 Bruges, an accidental port city by virtue of a  tidal wave that swept inland from the North Sea some eleven miles down the River Zwijn in 1134.  In pesponse, the  citizens of Bruges built a web of canals to take advantage of their good fortune but their continued dredging eventually caused the Zwijn to silt in, leaving the city marooned at  a permanent low tide.  In  Psychologie d'une ville: Essai sur Bruges (1901),  a book dedicated to the memory of Georges Rodenbach, Hippolyte Fierens-Gevaert referred to the dawn of the 15th century as "The Twilight of Bruges"

"The Middle Ages...knew that everything on earth is a sign, a figure, that the visible is only worth what it extracts from the invisible; in the Middle Ages...which were not gullible, as we are, to appearances, closely studied this science and made it the caretaker and the servant of mysticism." - excerpted from The Cathedral (1898) by J.-K. Huysmans, translated from the French by Clara King (1981). 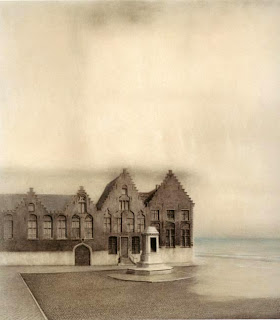 The waning of religion in subsequent centuries left a vacuum for nostalgia to fill.  A more complicated response  was  a kind of psychological mysticism in works of 19th century Symbolists.   The fate of Bruges they confirmed their sense of irrelevance to an  industrialized present in the city's glorious art and architecture. What better image could there be than Fernand Khnopff's almost surrealistic rendering of the Memling Plaatz, named for the great Hans Memling (c.1430-1494) .  Marooned by a rising tide, the plaza and the base of the statue are rendered recognizably but where is the Memling statue?  When queried, Khnopff's reply was that he had never seen the statue.

Belgium has been called 'a country that does not exist,"  an allusion to its unresolved duality; a Flemish  (Dutch) north and Wallon (French) south.   When it was part of the Holy Roman Empire, th area was called the Austrian Netherlands and when it was de-accessioned, as they say in the museum business, the French considered annexing it but didn't. 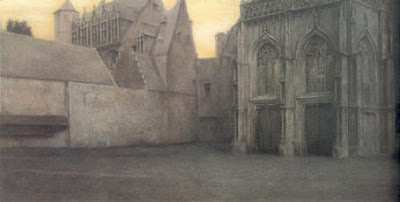 Georges Rodenbach (1855-1898)  was born in the French speaking Flemish city of Tournai, poet Emile Verhaeren (1855-1916) came from Saint-Amands in eastern Flanders, and playwright Maurice Maeterlinck (1862-1949) was from Ghent (Gand) in western Flanders.  Maeterlinck,who won the Nobel Prize for literature in 1911, edging out Verhaeren for the honor, was hailed in his lifetime as 'the northern Shakespeare.'  Yet all three wrote in French.

Bruges-la-Morte, the novel and the resutling metaphor, made Rodenbach's name.  Equally claustrophobic is a story of his that was published posthumously - Le Rouet des Brumes or The Spinning Wheel of the Mists (1901).  A refashioning of the  Narcissus myth, it is one of many late 19th century distortions that go to extremes never hinted at in its ancient origins. The protagonist of Le Rouet des Brumes is a nightmarish variation on Joris-Karl Huysman's exasperated aesthete, des Esseintes, in  Against Nature.(A Rebours, 1884). 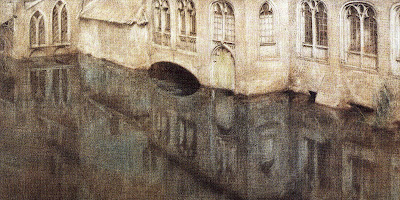 Although Huysman's narrator is the self- identified friend of man who died in a sanitarium, he recounts his tale with the detachment of a psychiatrist offering a case study.  The nameless recluse gradually retreats from the world to a house full of mirrors.  Happy at first, he descends into paranoia, only to be found bloody and bruised after attempting to smash through one of them to "the other side."

"I was not surprised, knowing my friend to be sensitive, knowing besides what impressions can be created....within closed rooms, amidst the dust, the musty odor, the confusion, the melancholy one feels for things that seem to have died a bit during one's absence.  Oh, the sadness of evenings of jubilation!  Evenings of return, after the forgetfulness one experiences while away.  It seems as if all one's sorrows that had remained at home come out to greet us..." -  Georges Rodenbach (Bruges-la-morte)

If we are tempted to share the detachment of Rodenbach's narrator, keep in mind that Rodenbach  began  another work, L'Ami des Miroirs (The Lover Of Mirrors), with these words: "Madness is frequently nothing other than the paroxysm of a sensation that originally appeared to be purely artistic and subtle.'   This puts Rodenbach at odds with the artist whose name is most often linked with his, creator of the frontispiece for the first edition of Bruges-la-Morte: the subtle Fernand Khnopff.  The circumstances of Khnopff's return to the place he considered his home town were obscured by the artist, whereas Rodenbach, who never returned to his birthplace in Ghent, spoke of it constantly, according to his children. Two differences met and recognized something akin in each other.

Note:  Artworks by Khnopff were made during the year of his one acknowledged return visit to Bruges in 1904. 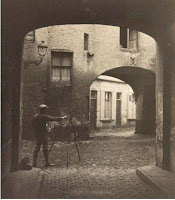 Tamborim Zim, glad you like it. There will be more about Fernand Khnopff's art - soon.