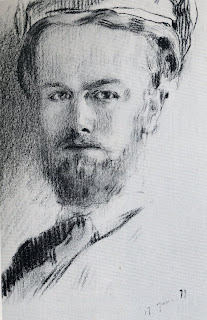 “Two small, very sharp, metallic eyes, a slightly receding chin, a disdainful mouth, and a head of hair, Oh! Beautiful red hair of a barbarian, describing comma-like curls on his forehead and giving him a kind of widl crown; upright posture, neatly dressed, a simple person who had a horror of appearing disheveled; a Clergyman in the process of becoming a Dandy.” – Emile Verhaeren, in L’Art Moderne, 1886.

So the poet Emile Verhaeren took the measure of his friend Fernand Khnopff.   Both men were in their twenties at the time and in the process of becoming artists;  Verhaeren, the Belgian poet who narrowly lost out to his friend Maurice Maeterlinck for the Nobel Prize for literature in 1911 and Khnopff, the great Belgian artist. Both  men had also studied law to please their families before turning to art. 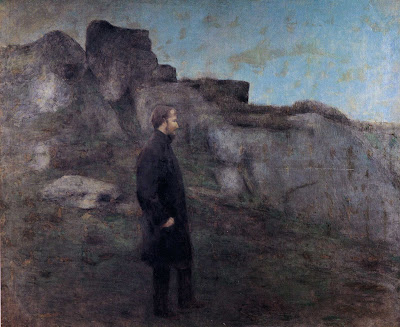 Attracted to the avant-garde group Les Vingts in 1883, Verhaeren became the voice of their new art   in the magazines La Jeune Belgique and L'Art Moderne and in his book  Quelques Notes sur l’oeuvre de Khnopff (1887).  Verhaeren expressed  doubts  that visual art was suited to the expression of ideas.   Khnopff had no such qualms and his best works bear him out.   The counter argument was made by Theodore Joufrrey  in 1842: “Behind appearance is a reality which appearance expresses but can never fully disclose.   Beauty is a sort of symbolic disclosure.   It is the Invisible made visible through expression, the revealing “garment” of the Invisible, and kin to our own natures…” 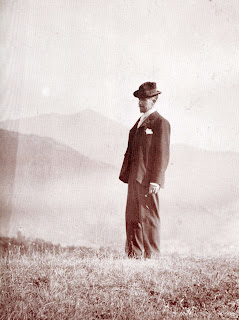 What did Verhaeren have in mind when he used the word dandy about his friend?  A haughty expression doesn't quite convey the sense of the French term le regard hautain that was the public face of the Dandy.  Baudelaire had written, "Dandyism is not, as many seem to think, an exaggerated love of fine clothes and material comfort.  These things, to be perfectly dandy, are mere symbols of his own spiritual aristocracy.   Dandyism is primarily a desire to be individually original, but always within the limits of polite social convention.  It is the love of startling others and never being startled oneself." Dandyism, so defined, has something to do with art of Fernand Khnopff. But to that, add Khnopff's peculiarly hermetic vision, his interest in making the inscrutable visible.

Khnopff began by sketching from nature at sixteen to pass the time during the long summer at his family's second home in rural Fosset, a village in the Haut-Fanges, or High Fens of eastern Belgium.  There, where the local people still cherished old beliefs in the occult and druidic tree worship, Catholicism was more a matter of formality than of devotion.  The dame blanche or white goddess was still venerated. She, too, would have much to do with the art of Fernand Khnopff. 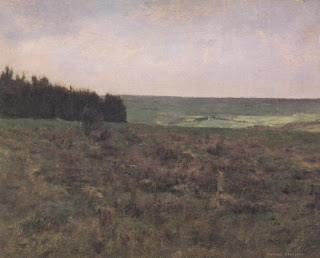 The forests and fields of the Ardennes not so much.  Among his several landscapes, done in the style of another storied wood - the Barbizon of France -  Une Crise (A Crisis) painted in 1881 when Khnopff was only twenty-three suggests  that landscape by itself was not the subject.  Whether he intended a general comment on the searching of youth or something specifically personal is left up in the air.  In middle age, Khnopff made sketches of winter scenes at Fosset but the finished painting, La vielle en hiver,  again suggests his favorite motto, a variation on an 18th century axiom of Nicolas Chamfort - "One has only oneself". 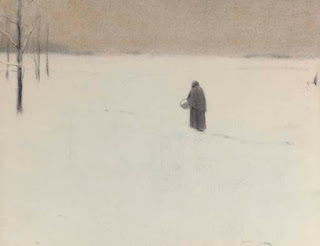 Posted by Jane Librizzi at 7:11 AM

Thanks. Another Belgian fin de siecle „crazy“.
New to me, after Ensor etc.
He clearly could paint.
A Modernist of sorts, but a bit timid against Ensor and another guy who I forget.

Welcome, William, and thanks for your comments. Khnopff was extremely well-read and also quite canny,I think. He left various clues in his work how seriously he meant them is still open to question, If he was crazy it may be that he was crazy like a fox.