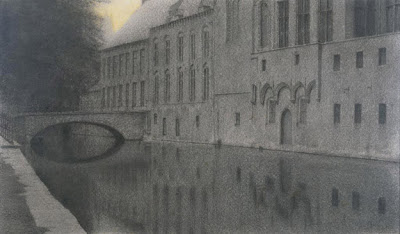 "What is the effect of an early education and of peculiar surroundings upon a disposition abnormally sensitive  and precocious?...Like birthmarks, these reflections and impressions grow with us - sometimes hidden, often shown in disfigurements, always there...Bruges has much to do with the art of Fernand Khnopff."  -  Walter Shaw Sparrow, Magazine of Art, London, 1890.

Idealized memories of childhood are common enough, and probably explain the persistent  myth of a golden age.  D'Autrefois,  or other times, often are the subtext of Fernand Khnopff's art.  We interpret at our own risk.

"Where life was concentrated in two or three rooms and where the salons were only used once a year for official receptions, only after ward to be closed once again for the length of the long silent winter but also in  the desolation of the summers.  grandiose dwellings, places of oblivion and solemnity, where a child's spirit is almost forced into melancholy meditations and solitary pondering...." - Hippolyte Fierens-Gevaert on the Khnopff family in Bruges. 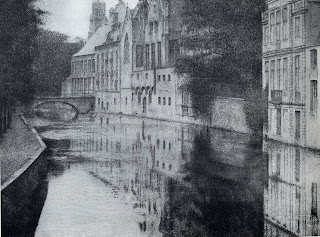 According to Pol de Mont, director of the Museum of Fine Arts-Antwerp, Fernand Khnopff told him in 1901 of the  countless hours he had spent playing with his younger brother Georges  in the cellar of the family home in Bruges.  Khnopff's vivid memories of staring out windows just above the waterline of the canal  may have been the source of his later idiosyncratic image cropping.

"I have often been reproached for cutting the heads off my personages  with the frame which surrounds them, but in doing that I have had each time a precise goal.   Thus, in L'Offrande, I had wanted to give the impressions of a very large figure seen on high from below," (Fernand Khnopff quoted by Edmond-Louis de Taeye in Fernand Khnopff, in the sereis Les artistes Belges contemporains, Brussels, Castaiagne, 1894).

Edmond Khnopff's (1826-1900)  father, was a royal magistrate in Bruges where the Khnopffs had lived since 1726. Originally from Austria, the family had been elevated to the nobility by the Holy Roman Emperor in 1621 and several generations had served as lawyers and judges in the Austrian Netherlands.  The independent Belgian nation was twenty-eight years old when  Fernand Khnopff was born on September 12, 1858 at his grandparents' home, a chateau at Grimbergen-lez-Termonde, east of Ghent   His  younger brother Georges (a future poet) was born at Bruges in 1860 and a sister Marguerite was born in 1864 at Liege. The Khnopffs lived at Langestraat 1, a location with a view of the famous Quai Vert (Green Quay).

Khnopff's methods for keeping the curious at arm's length were themselves works of art; he had mastered the aristocratic skill of revealing only so much as he chose.  He cooperated with interviewers throughout his career, but on his terms.   His descriptions of his only known return to Bruges in 1904 never varied from what he told his friend Leon Tombu: that he had put on dark glasses before leaving the train and  never removed them while outdoors.   This story, true or not, has an antecedent in Dendermonde.  After his  grandfather's death in 1868, Khnopff never visited there again. 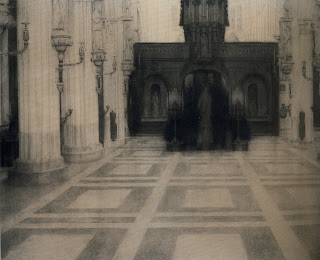 Khnopff obscured the extent of his use of photography but we still wonder about those dark glasses.  In Bruges. A Church (above) shows the interior of  the Church of Notre Dame and the altar by Michelangelo.  The Khnopff family coat of arms was displayed on the church walls; by no means was this just one among the many churches of  Bruges for Fernand Khnopff

A country with two principal languages is a country in need of interpreters. The polymath Henry Van de Velde  (1863-1957) said that he saw in Flemish and wrote in French.   Flemish cities - the beads on the rosary of Flanders in Fierens-Gevaert's  resonant phrase - existed as a living reminder of.another time  The works of  the Belgian symbolists were rooted in reality as much as in dreams..  The repetitious images of stagnant pools and crumbling churches in Symbolist art,  attributed to the stories of Edgar Poe Allen, had real-life counterparts in cities like Bruges. 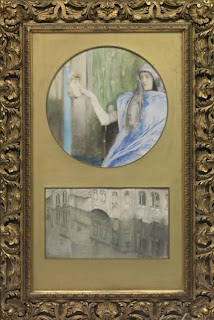 The place that religion had occupied in everyday life hollowed out in the 19th century, leaving a vacancy that  the Symbolists filled with psychologically-tinged mysticism.  In L'Art Romantique  (1869), Baudelaire asserted that an affinity exists between spiritual states and the natural world and, furthermore, "art is of value only in so far as it is capable of expressing these mysterious relationships."

What coded messages does this dual image hold?  The upper panel is a tondo, a round painting of Marguerite, Khnopff's sister.  Enclosed in a circle, a form symbolizing perfection, she touches the lips of a mask of Hermes.  Behind her, a white crane is embroidered on  a wall hanging.  The lower panel shows St. Jan's Hospital in Bruges, home to a large collection of paintings by the great Hans Memling. At the bottom of the frame Khnopff engraved these words from Aesop's Fables: "Light winged the crane fled."   In an interview with Maria Bierme, Khnopff added:  "clear is the light of noble thoughts which rise toward the heavens." 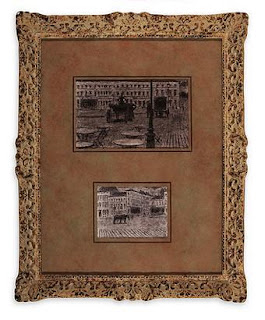 The year of Khnopff's  Secrets/ Refkections,  the Chapel House at St. Jan's hosted the first modern exhibition of Memling's work. It attracted 35,000 visitors but  Khnopff was careful to state that he had not seen the Bruges Memlings, which may explain his painting  - An Abandoned City - which shows the base of the Memling monument without the Memling statue on top!
One more secret, at least for now, is whether Khnopff was familiar with this intriguing dual image of the Place de Luxembourg by Khnopff's first teacher, Xavier Mellery. 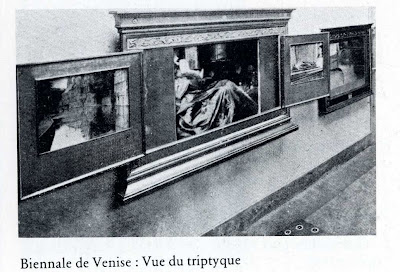 Posted by Jane Librizzi at 9:03 AM

Jane, I know Khnopff is one of your great interests, but even so this and the previous post are very striking and informative. I'm particularly taken with the notion that his early childhood play in the basement, at eye level with the canals, hardwired a particular visual perspective into his brain. As soon as I read that, I thought, "Oh, yes."

Neil, I've reading (mostly in French because that's where most writing about Khnopff is) and thinking for about two years. Good thing I wasn't working to a deadline! There's more to come, by the way - and not in chronological order necessarily.

I have often visited Bruges and came upon the house where Khnopff lived as a child, now a hotel. The windows near the canal evidently the basement mentioned in the first comment. I recently obtained a copy of the Catalogue Raisonne of Khnoppf's work published in 1979.

Lucky you, George! I had to use it in the library only, at my local university, but I spent lots of time with it. I believe there is a revised version that I have not been able to see. Perhaps another reader has. Thanks for you comment.