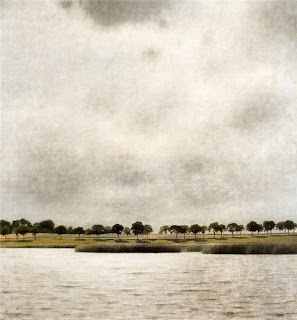 “We must never assume that artists did not see what they did not paint.” – E.H. Gombrich. 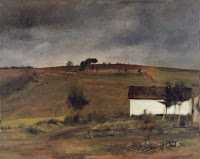 But how often do we look at a painting and not assume that it includes everything the artist saw?  Like the Belgian Fernand Khnopff, his near contemporary, the Danish painter Vilhelm Hammershoi was the most deliberate of artists.  Nothing in the paintings is accidental and nothing is elucidated for the viewer.


When Hammershoi (1864-1916) painted the lake at Gentofte (at top) in 1903, the small farming village was in the process of becoming a suburb of Copenhagen but for him and his wife Ida Ilsted Hammershoi, northern Zealand was a place for a quiet summer vacation.  There were new houses behind him as he painted and small farms nearby but Hammershoi chose instead  the light, and the water as his subject.  In Hammershoi's landscapes there is no discernible influence of the 19th century Romantic sublime with its mood of remoteness from the ordinary.  Hammershoi was perfectly capable of teasing sublimity out of the mundane.  His broad panoramas become, on close inspection,  carefully chosen and cropped.
In Hammershoi’s hands the road that gives the picture its name is its least noticeable feature.  Kongevejen, or the King’s High Road, was the main thoroughfare leading north from  Copenhagen.  The road had been laid out in the 1620s by order of  Christian IV, the king whose ambitious city building plans included the construction of Christianhavn, an artificial island bisected by canals,  where the Hammershois lived for most of their married life (at 25 Strandgade and 30 Strandgade). 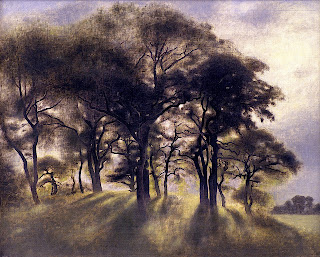 At first glance, Jaegersborg Dryehave (above) is an ordinary forest landscape,  one of several that Hammershoi painted from the inside looking out.    Nordic painters often portrayed trees as something like symbolic humans in their vertical stance but Hammershoi draws our eyes to the spaces between the trees.   This  effect had been discovered accidentally by 19th century photographers, as a by-product of technical limitations.  In Hammershoi's paintings there are no accidents, and we are left to marvel at how he makes the trees and even the ground dematerialize before our eyes as he mesmerizes us with effects of light. 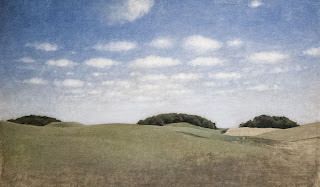 "When people who tumble about in the bustle of a big city think now and then -  perhaps with a little sigh of longing - of life in the country, there hovers in their mind the picture of an existence blessed with leisure.  They imagine  and endless series of quiet days in which every minute passes with the imposing serenity of a grandfather's clock that measures eternity in the parlor of an old farmhouse.
And in reality, there is no place where time is more fleeting and where life seems shorter than in the country.  Even if the individual days may seem prosaic enough in their uniformity, the weeks are in a hurry - the years flee.  One fine day life is over and everything disappears like a remnant of s summer or winter nights' dream."
- from  The Royal Guest (Der kongelige Gaest - 1908) by Henrik Pontoppidan, translated from the Danish by Phillip Marshall Mitchell and Kenneth H. Ober, University of Chicago Press: 1977.

Henrik Pontoppidan (1857-1943) won the Nobel Literature Prize in 1917 for  his portrayals of everyday Danish life.  His novels and stories included the upheavals of modern life that Hammershoi left out of his paintings. 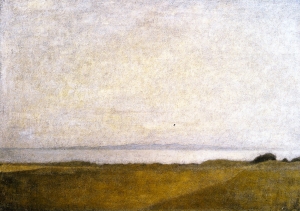 Note:  English pronunciation of the name Hammershoi renders the third syllable as "skoy."

Hammershoi is always welcome in my book. What pictures indeed. To do some small justice to his work is all I can hope for. Thanks.

I was up until now only familiar with Hammershoi's interior pictures. But it should come as no surprise that he painted the landscapes with such fine editing too.