Ostroumova-Lebedeva: Artist Of The Silver Age 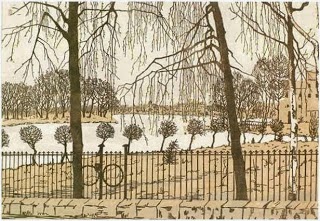 “In the early spring when they chipped off the crust of frozen snow from the streets and squares; when along the newly exposed paving between these strata sped, appearing as if from nowhere, streams that glistened in the sun; when dark-blue shadows with piercing distinctness molded the cube-shaped buildings and the roundness of columns; when ‘new’ air poured through the wide-open windows (liberated from their second window frames) into stale apartments; when the ice on the Neva swelled, turned grey, and, finally rose up, broke, and started moving towards the sea – then the Petersburg spring was stunning in the elemental expressiveness of its awakening. There could be no doubt that one season was giving way to another. But when the new order had finally been completely established, there began a truly blessed time. The city which had for months been so forbidding became gentle, enchanting, and kind. The trees in the gardens were covered in the most tender leaves; the scent of lilac blossom was overpowering; the bird-cherry was spicy-sweet; and the elegant blocks of palaces were reflected in the now freely flowing water.” - Alexandre Benois, from Memoirs, Paris: 1936, Columbus Books, U.K.: 1988 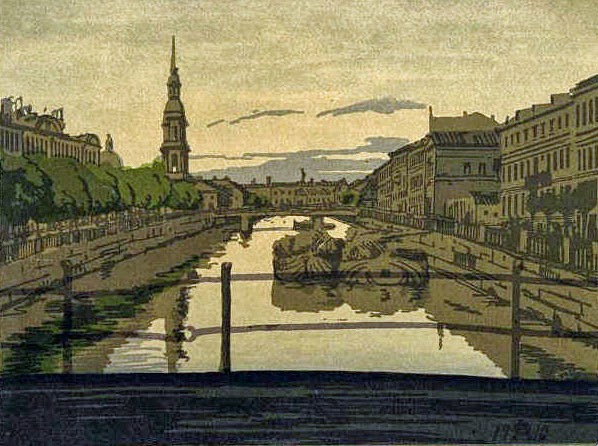 "It drags on without end, this heavy amber day.
Impossible the sadness, vain the waiting!
Once more the deer speaks of the Northern Lights -
Its silvered voice sounds in the deer park."
- from Rosary by Ann Akhmatova, 1912, translated from the Russian by Richard McKane in Selected Poems, Oxford University Press: 1969. 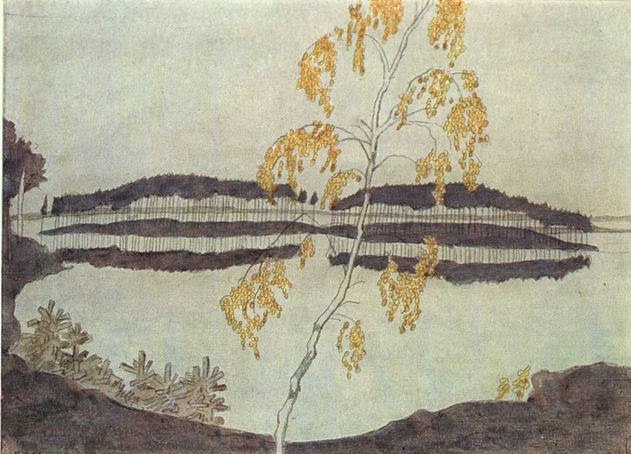 After after a few years abroad, Benois returned to his native city of St. Petersburg, to become the director of the Mariinksy Theater, home to the Imperial Ballet.  Paris was exciting but Russian ballet was about to set fire to the stage and Benois, designer of sets and librettist, would play an important role. in the revival of Russian art.
Benois is a figure who appears throughout the story of another St. Petersburg artist, the overlooked (outside Russia)  Anna Ostroumova-Lebedeva.  She  reinvigorated the medium of engraving in Russia, introduced Japanese prints, and became a master of the woodcut.  Like her friend Benois, who put painting to the side to find his metier through the stage, Ostroumova moved beyond painting, too. 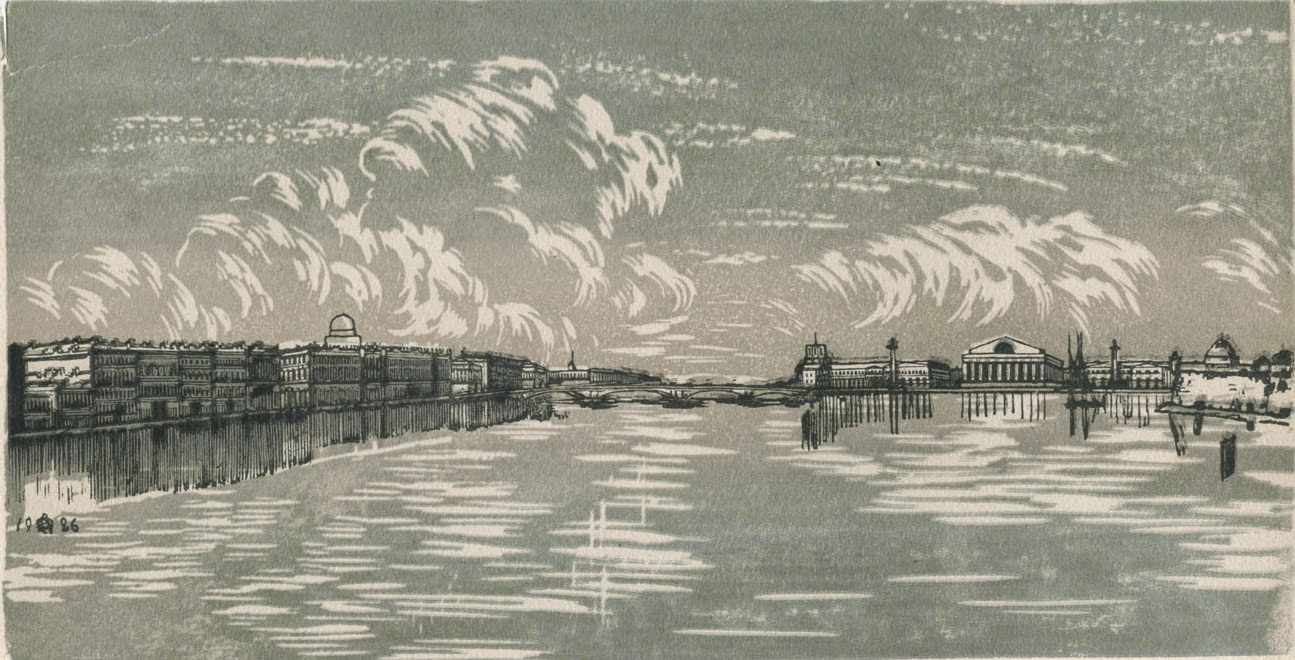 “Never has classical architecture had so much room,"  wrote Joseph Brodsky in his essay The Child of Civilization

The 'Silver Age' in Russian art spanned the decades from 1890 to 1920.  Russian artists were ready for something new: they had become bored with realism and  were enchanted by the artifice that western symbolism seemed to offer.  In 1905, as riots were brutally suppressed by the Tsar and the Russo-Japanese War ended in defeat at Tshumima, real life seemed to take on  horrific aspects of Symbolist vision.  But there had been storm warnings.  On May 4, 1901, students demonstrating at the Kazan cathedral had been beaten and even killed by the police.  In reaction, Ostroumova took to her bed for two days with what she characterized as a mental breakdown. This turmoil, both inner and outer, is noticeably absent from her art.


St. Petersburg was a magnet for artists not fortunate enough to be born there.   Anna Akhmatova (from Ukraine) and Osip Mandelstam (born in Warsaw) both read their poems  at the short-lived (1912-15) Stray Dog Cabaret, its manifesto issued under the attention-getting title Slap in the Face of the Public.  The young composer Prokofiev, left Moscow to study at the conservatory, playing his  experimental compositions called Sarcasms, Op. 17 (1912).  The Muscovite Alexander Scriabin, who made his debut as a pianist in St. Petersburg, later proclaimed that his music would herald the coming of the Apocalypse. 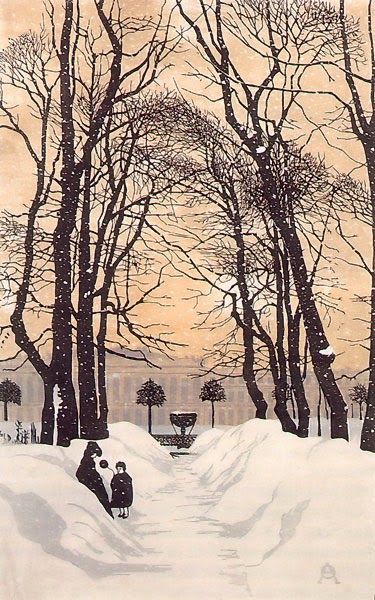 Anna Ostroumova-Lebedeva lived throuhg the major upheavals that the new century visited on her city.  She was born in St. Petersburg in 1871 and died in Leningrad in 1955 (same city, different names).  Her birth date was May 17, using the old style calendar, which became May 5 using the reformed calendar, and she  died on May 5, 1955.


If St. Petersburg was Russia's "window on Europe" it opened toward Paris, where Ostroumova and Benois first met.  For Ostroumova, the impetus to study in Paris was partly practical. "My father has told us many times, that he will not be able to support us in the future, that he will give us a good education, and that we will have to earn our living.”  Anna chose art; her sister Sonia chose chemistry.  Shortly after her arrival in 1898,  Ostroumova met Alexander Benois who was living with the family of her classmate Konstantin Somov.  Ostroumova and Somov were both  students of the American James McNeill Whistler.


An erratic teacher at best, Whistler would eventually implore Ostroumova to come to America with him for further study,  although he had initially  dismissed her with typical contemptuousness: "But you can do nothing, you know nothing, I can't teach you!"  In her memoirs, published in three volumes between 1935 and 1951 (translated by Larissa Haskell), Ostroumova-Lebedeva described  Whistler's unorthodox  teaching methods.
"Many things surprised me or even seemed quite funny to me: the complete lack of freedom or any independence and the absolute obedience to all rules insisted on by Whistler."
"To mix colors on the palette one had to use a special method invented by Whistler and if you try to do it your own way your neighbors grab hold of your hands because they watch you the whole time." 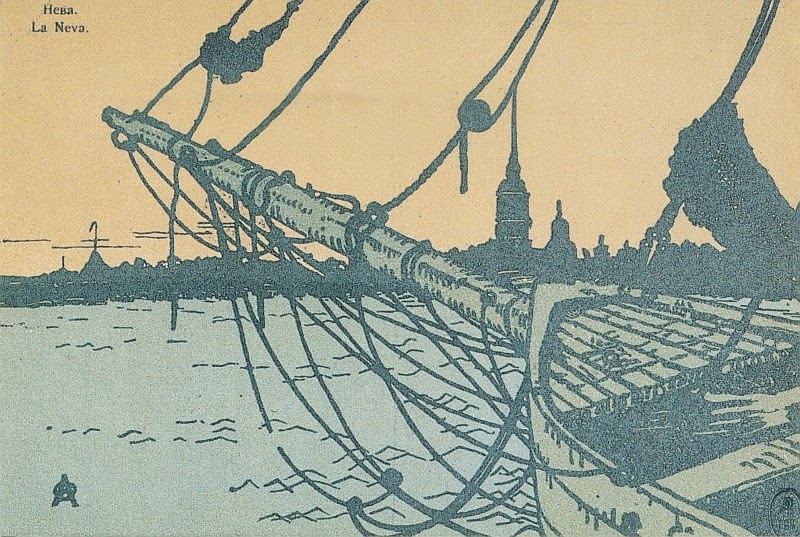 After returning home in 1899, Ostroumova joined  Benois, Leon Bakst and Sergey Diaghilev in starting  the ambitiously named Mir Iskusstva  or World of Art. She married Sergey Lebedev, a chemist, in 1905.

Mir Iskusstva celebrated the 300th anniversary of St. Petersburg by holding a design competition for art cards to be sold at railway kiosks and on the docks.    The cards, printed on fine quality papers, sold 30 million during two decades. 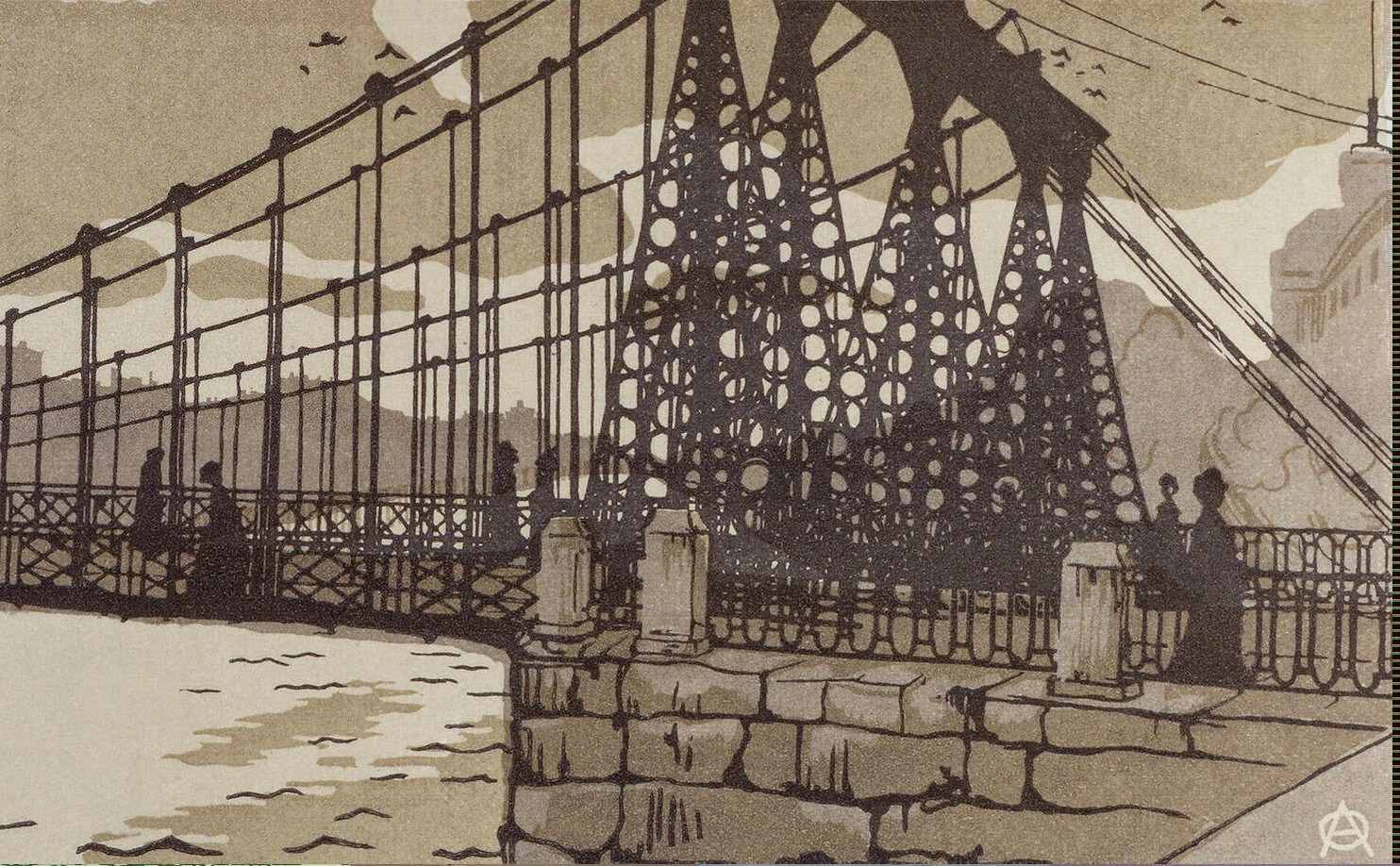 Like the French print-maker, Henri Riviere, Ostroumova recognized the poetry latent in modern technical feats like the Eiffel Tower, constructed in 1889.  Ostroumova-Lebedeva’s woodcuts of activity around the waterways of St. Petersburg will look familiar to  anyone who has seen Riviere's Thirty-six Views of the Eiffel Tower.  The faded colors of antique Japanese prints that the French mistakenly took for the original colors, turned out to be the ideal palette for representing how the Florentine architect Rastrelli's ice cream colored stucco buildings appear under northern skies.  Ukiyo-e, art of the Japanese 'floating world', proved to be an apt medium for picturing St. Petersburg. 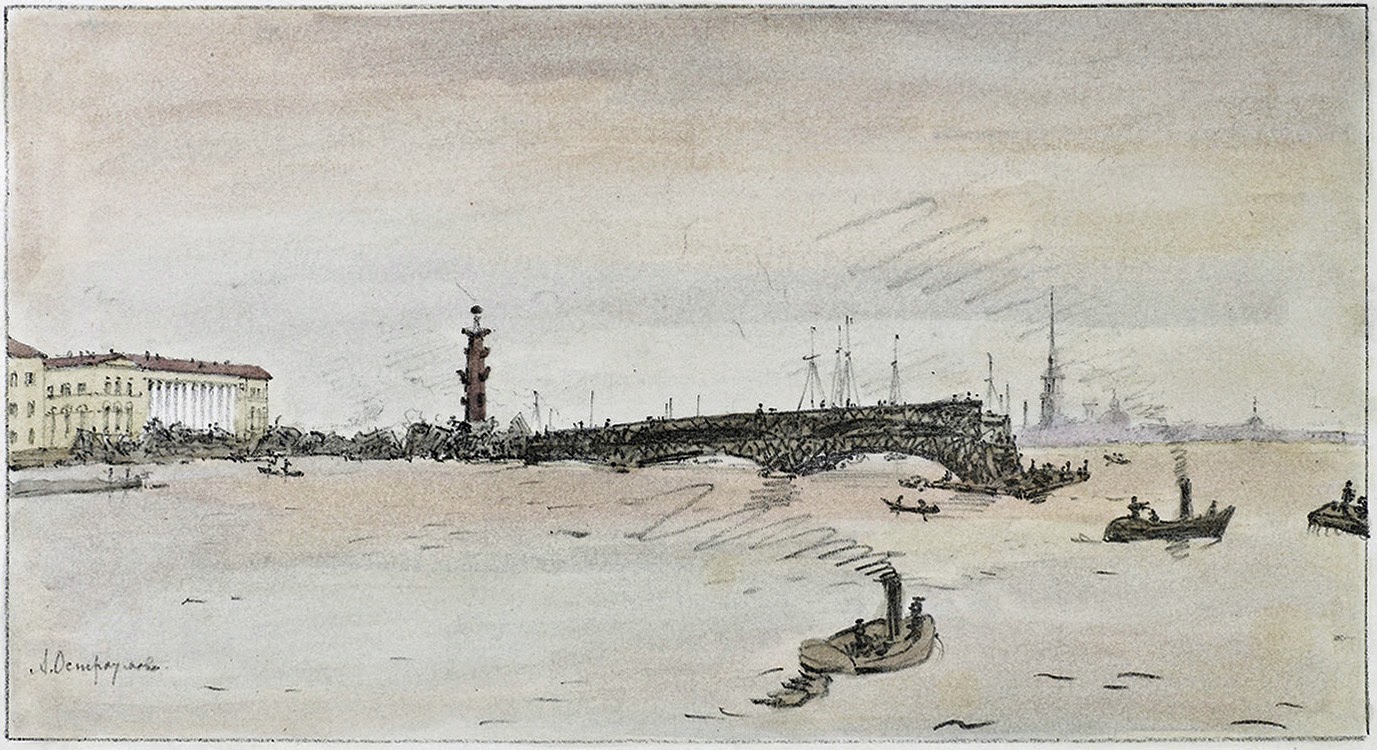 From 1918 to 1922, Ostroumova-Lebedeva taught at the Institute of photography and photographic technology and then, after 1934, at the Russian Academy of  Fine Arts. Meanwhile, Alexander Benois was now a curator of paintings at the Hermitage Museum, under whose imprimatur he published a monograph on Ostroumova-Lebedeva, circa 1924.
Ostroumova-Lebedeva also worked with the Community of St. Eugenia, a charity under royal patronage of Czar Nicolas I's granddaughter.  The group funded new hospitals, trained nurses, and sheltered the poor. In 1920, the Communists  disbanded the group:  charity  was no longer needed in a workers' state. 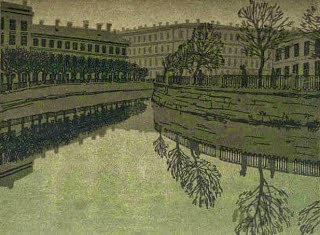 “How much has been said and written about the White Nights. How they were hated by those who could not get used to them, and how passionately they were loved by others.  …And suddenly in this solemn stillness, in the transparent sleepy twilight, between the scarcely darkened sky and the strangely luminous water, from somewhere up above, settling gently on the water, there begin to be heard notes that are almost hollow, ‘glassy’, ‘from beyond the grave’. It is the chimes of the clock on the spire of the fortress, telling us in two prayer chants that it is now midnight… The chimes played ‘Glorious is our Lord’ and then, immediately after that, ‘God save our Tsar’. ...   They say that these hourly roulades, this drip-dripping of sounds in the quiet of the night drove prisoners in the fortress to despair, to madness.”  – Alexander Benois, Memoirs 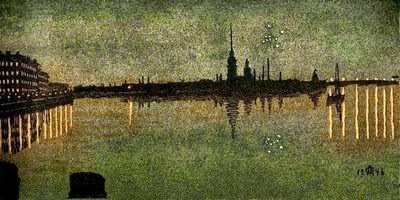 Some cities are built around a central square. St. Petersburg has at its heart a virtual square of majestic buildings clustered around water.  No wonder then that Benois set Stravinsky’s Petrouschka (1911) on Admiralty Square,  The flatness of the surrounding countryside gives a regal look to buildings in a city built on landfill.  Thanks to Catherine the Great, not a monarch to rest on the laurels of her Romanov predecessors, a series of devastating fires that wracked the city became the impetus for enlightened urban planning.  Pink marble from nearby quarries in Finland was used to reinforce the canal embankments, giving a warm glow to watery reflections of gray northern skies.  The mists of St. Petersburg are also a feature in Ostroumova-Lebedeva's prints, a lesson from the floating world applied in her post-WW II print The Peter and Paul Fortress at Night (1946).  T


During the Second World War, she lived through the siege of Leningrad, continuing to record the life of the city.  Her images of  boys fishing near a warship or bridge construction are shapely works, suffused with the poetry of northern light and at the same time constructed with a sharp eye for the revelations of photography, the flatness of layers of planes like so many bits of stage scenery, the way the eye could cut and frame reality at will. 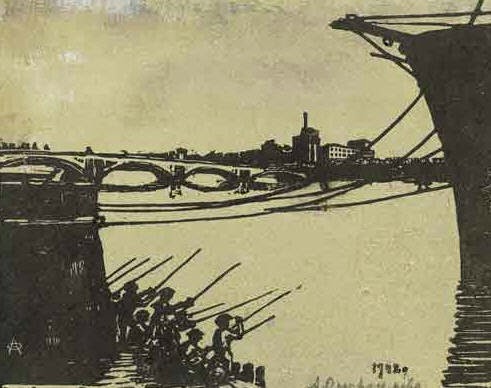 Note: On July  17, 1989, the remains of Tsar Nicolas and Empress Alexandra, and three of their children, Olga, Tatyana, and Anastasia, and other members of their household who had been executed on July 17, 1918 at Yekaterinburg, were returned for burial to St. Petersburg in the Peter and Paul Fortress.

If every summer you returns in Venice, for me, it's in Russia. I am enchanted to read this post and to look at these beautiful engravings : Anna Ostroumova-Lebedeva's name opens me a new door, thank you.

After seeing Alexsandr Sokurov's film "Russian Ark", I think I know what you mean. It made Ostroumova-Lebedeva's even lovelier to me. Thank you.