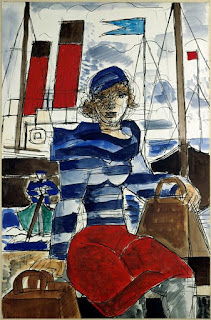 That crisply smart outfit the young woman wears in Marcel Gromaire's painting La voyageuse au bateau (1930)  is about  to become ubiquitous once again this spring, according to the fashion press.


La rayure bretonne, or the Breton striped shirt, became in 1858  as the official uniform for enlisted men in the French navy. At the time the stripe was considered especially masculine;  Guy de Maupassant always wore a striped jersey when he went out rowing or mixed with the tough guys who frequented the shores.  Impressionist painters would follow, so to say, when they pictured working class men relaxing at open air cafes or in dance halls and cabarets.

The colors blue and white were chosen as being nautical; sailors soon decided that the contrasting stripes would make it easier to spot a man who went overboard. Even today an authentic marinière (marine shirt)  must conform  to  Naval specifications:  the body of the shirt has twenty-one blue stripes, representing  Napoleon's major victories, alternating with white stripes that are twice twice the size.  To be precise, the blue stripes are ten millimeters wide and the white stripes measure twenty millimeters.   And, for practical reasons, the sleeves are three-quarter length, a style that would become known as 'bracelet-sleeves' when Coco Chanel introduced it to women's wear.


An ambitious young woman,  Gabrielle Chanel (1883-1971)  having had some success as a hat-maker, opened a shop in the seaside resort town of Deauville in 1913 to sell her uniquely styled luxurious casual clothing to women of leisure.  Impressed by the crisp style of the sailors stationed at Deauville,  Chanel then introduced her own marine look to the Paris in a nautical collection in 1917. 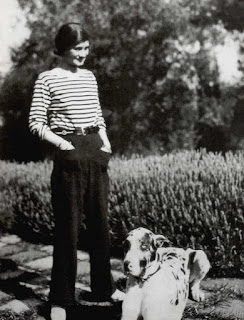 Chanel invented the sporty sophistication that has become the preferred style of modern women, exemplified by  the Chanel suit, a wool jersey outfit consisting of a cardigan jacket and pleated skirt, paired with a belted pullover top.   Her innovative use of jersey, a machine knit fabric  that had  been relegated to the manufacture of men's underwear and hosiery,  or in sports clothes for tennis, golf and swimming.  Other designers disliked jersey, rejecting it as too difficult to handle compared to woven fabrics.   Chanel took advantage of wartime fabric shortages and, yes, being a woman, she recognized that women wanted simpler, more practical clothes and greater freedom of movement. Her reputation grew during the decades between the two world wars as French women moved  into the labor force (in greater numbers than their American counterparts), taking the places left vacant by a generation of men killed in combat.
Such as the history of the rayure bretonne is, there are always new pretenders hoping to claim the crown. When  Jean Seberg appeared in Jean-Luc Godard's film A bout de souffle  Breathless (1960) wearing a marinière a new generation discovered Breton stripes, and Yves Saint Laurent 'introduced' the shirt in his first haute couture collection .
Marcel Gromaire (1892-1971) was Chanel's contemporary, and a painter of French leisure,  golf, tennis, fishing, swimming and sun bathing, even managing to combine two of them in Tennis devant  la mer or Tennis by the sea (1928, Musee d'Art moderne de la ville de Paris).