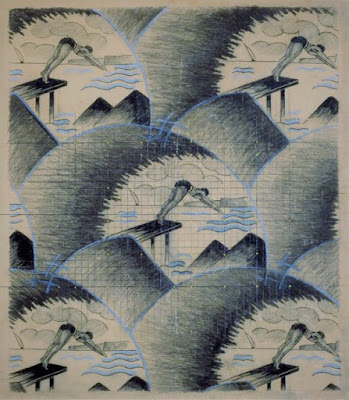 What manner of dive are these swimmers making? Have they just bounced off the diving board (rebondir sur le tramplin)?  Will this turn into a somersault (plongeon perilleux)?  Definitely not a dolphin dive!  It's summer so even the arts get to lighten up.

The divers at the swimming pool (Les Plongeurs a La Piscine), in this case a textile design now housed in a museum that was originally an indoor swimming pool, are both examples of Art Deco, a style named retrospectively in a book of that name by Bevis Hillier published in 1966.

The divers in this repeating textile pattern are a virtual synchronized swim team.  Its conical mountains and curving waves evoke Japanese art of the Taisho period (c.1912-1926) and suggest the ideational power of decoration across cultures. Synchronized swimming, also known as  water ballet,  became increasingly popular thanks to the modern revival of the Olympics and, more importantly, to the introduction of streamlined bathing suits and the sleek rubber bathing caps known as 'aviator caps' for the tough leather skullcaps worn by pilots of early single engine planes.

La Piscine in Roubaix, France,opened as a pool in 1932 and closed in 1985.  In an inspired remodel, it reopened as a museum in 2000. Its permanent collection is large and varied, Roubaix having been the location of many textile factories since mid-19th century.

Atelier Stablo, founded in the early decades of the 20th century at Roubaix, moved to Paris for heightened visibility  but eventually fell victim to recession in the 1980s,  The atelier specialized in furniture weaving and industrial textiles as the Delerue company, a family business that had a long textile tradition. The seats for the restaurant at the Eiffel Tower were woven at their Roubaix studio, to name one prestigious commission.  They did not keep track of this and other projects in their records, sadly typical of many Art Deca projects, including Atelier Primavera, the original stand alone boutique in a department store - this at Le Printemps in Paris in 1913.  What remains of their archives is now part of the permanent collection of La Piscine