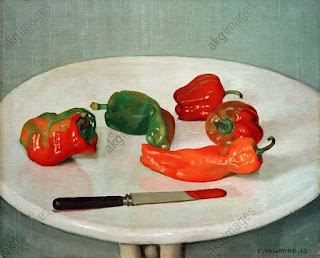 At first glance these carefully arranged peppers appear to be circling each other warily, like contestants in a beauty contest.  Or the presence of a  knife suggests an illustration from a contemporary cooking magazine.  Definitely looks like a  photograph. (Curious note about magazine photography: food is photographed from above while interiors are usually shot from a crouching position.)  But these red peppers Poivrons rouges were painted in 1915 by the Swiss-French artist Felix Vallotton.

Some context: around the late 1960s, influenced by the riposte of Pop Art to the oh-so-serious Abstract Expressionists who dominated the American art scene in the post-war period, young artists felt freed to try on various styles - minimalism, feminism, black art, and photorealism.  Some artists tried more than one at a time; for example Audrey Flack (b. 1931) was a feminist and a photorealist who went pretty maximalist in her paintings while she was at it, filling her pictures to the bursting point with objects.

Photorealism is one of the easier types of art to grasp.  The artist uses photography rather than drawing to  explore a potential subject.  How this information gets transferred to canvas is done in various ways but for a Photorealist painter the highest compliment would be for the viewer to be fooled into thinking  "I'm looking at a photograph."

Felix Vallotton (1865-1925) was born to a conservative Protestant family in Lausanne, Switzerland.  His father was - yes! - a chocolate maker.  An adventurous streak led the sixteen year old Felix to Paris to study art.   It was in the early 1890s that Vallotton began to make satirical woodcuts that looked at the ways of the French with a gimlet eye.  The technique had fallen out of favor after flowering during the Renaissance but its demanding and clinical aspects appealed to the young artist. And the prints made him famous.

When Vallotton joined the semi-secret, semi-mystical French group the Nabis ('nabi' is the Hebrew word for Prophet) he was christened the "Foreign Nabi." (Jozsef Rippl-Ronai from Hungary was called the "Hungarian Nabi.") He became part of the cultural underground of 1890s Paris but his work suggests that he held himself apart, in Paris but not of Paris.  His early painting were avant-garde but in his later years his work became difficult to categorize but  more conservative in choice of subject and tone, as he began making portraits and still lifes.

Vallotton studied classics but switched to drawing and settled in Paris in 1882.  He enrolled in the prestigious Academie Julian, also attended by most of his future fellow Nabis. Vallotton showed paintings at the Paris Universal Exposition in 1889,  where Japanese prints and the newly dedicated Eiffel Tower caused a sensation.   Still, Vallotton had to work as a restorer to earn his living.  The hours spent at the Louvre studying works by Da Vinci, Durer, and Holbein had stood him in good stead and gradually he began to receive commissions from home for paintings.

After his Nabi period (1892-1900) Vallotton's reputation was secured.  After he married Gabrielle Rodriques-Henriques, the daughter of a wealthy art dealer, in 1899 his financial future was secure.  He acquired a studio on Honfleur, a village on the south bank fo the Seine across the river from Le Havre. There the artist focused on still life painting, particularly fruits and vegetables. The keenness and precision of his eye was like that of a camera. "More than ever the object amuses me: the perfection of an egg; the moisture on a tomato; the striking (martelage) of a hortensia flower;these are the problems for me to resolve." - F.V., quoted in Felix Vallotton: Fire Beneath the Ice by Isabelle Cahn,  Lecturis: 2013.

"Felix Vallotton: Painter of Disquiet" , organized by the Royal Academy of Art in  will travel to the Metropolitan Museum in New York City (October 29, 2019 - January 26, 2020).

I had never seen these red peppers from Vallotton. Thank you for pointing out this promising exhibition of the Metropolitan, Jane.

Tania, I think people are taking a fresh look at Felix Vallotton's work. The received wisdom is that his early work when he was a Nabi was good and the rest was a mistake or stillborn. I had never seen Poivrons Rouges" until this exhibition either.