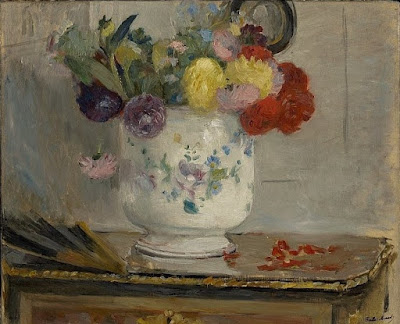 "Men are inclined to believe that they fill all of one's life, but as for me, I think that no matter how much affection one mght feel for one's husband, it will not be easy to break off a life of work.  Romanc is all very well, as long as there is something besides it to fill one's days." - Berthe Morisot

"Being reassured that whatever kind of art you make it will be labeled feminine." -  the Guerilla Girls quoted from the exhibition "The Advantage of Being a Woman Artists," Tate Modern Museum, London, 1988.

Painters invented natural light in the 19th century: Courbet, Millet, and others depicted ordinary people and settings as realistically as possible.  Before then light had been an arbitrary feature to be manipulated as desired.  Whereas Medieval and Renaissance artists employed light didactically to draw attention to the religious and metaphysical  messages of their paintings because transcendence exists beyond ordinary perception.  For the Impressionists the play of light  itself became  the subject. Berthe Morisot's Dahlias bridges the realist/impressionist divide, giving the viewer the sense that the source of light which is coming from outside the picture frame is a window.  Beneath the yellow flowers, Morsiot has created the reflection of window panes on the curved  surface of the porcelain vase.

In 1876, the year Berthe Morisot (1841-1895) painted Dahlias, she showed her work at the second Impressionist  exhibition in Paris.  Morisot was the only woman to participate in seven out of the eight exhibition held between 1874 and 1886.  To put this in the context, the  of her career, the year before Morisot had painted three of her most admired pictures:  Manet on the Isle of Wight; The Wheat Field; and Hanging the Laundry Out to Dry.  Still life was an unusual subject in Morisot's oeurve although many of her interior scenes contain vignettes of still life.

Grace Hartigan and Helen Frankenthaler, two abstract expressionists who read Morisot's letters when they were finally published decades after her death, were moved by her struggles, finding  in her an ambiguous and haunting precursor.  Frankenthaler went on to reinterpret a painting that Morisot had posed for, Edouard Manet's Balcony in Los Mayas in which she occluded  the Morisot  figure.

Morisot began with advantages most aspiring female artists of her time could only wish for.  Her family was wealthy and cultured, they built a stuio for her in the garden of their Parisian home, she took private art lesson with teachers she chose for herself.  She chose to join with artists who held independent salon, showing with them at seven out of eight salons between 1874 and 1886 and challenging the legitimacy.  Her beauty was held against her as a fault.

At her death about five sixths of Morisot's paintings remained within her family: she had only sold between twenty-five and forty pieces during her career. Despite gifts to various museums by her daughter Julie Manet, her gradual erasure after her death proceeded like the fading of the Cheshire Cat. Only eight years later Camille Mauclair in his influential study L'Impressionisme (1903) relegated Morisot to the group he designated  "Secondary Impressionists."   The dealer Ambroise Vollard had collected 360 photographs of her paintings for a book-length study but the project was never completed.

Thanks for this unknown painting, Berthe Morisot is an incomparable artist.

Tania, I had not seen a Berthe Morisot still life before I saw this one.
Her admirer and friend Edouard Manet painted many still life vignettes during his last years (he died in 1883).

I loved Morisot. But there were (at least) two problems. The abstract women expressionists you mentioned didn't read Morisot's letters until they were finally published decades after her death. It was not too late to adopt her as a type of role model, of course. Secondly I know Frankenthaler's story and her works, but not Grace Hartigan's.

Hels, Grace Hartigan (1922-2008) was a very independent and feisty person. She knew everyone in the downtown New York art scene post-WWII. She collaborated with the poet Frank O'Hara, a close friends.