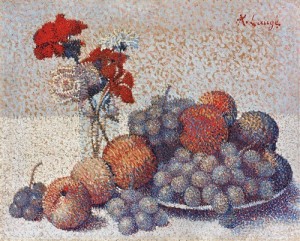 "Light is something that cannot be reproduced, but must be represented by something else - by color."
- Paul Cezanne


Pointillism is all about color. It was based on a theory of simultaneous contrast, defined as the tendency of a color to move toward its complementary color.  Based on theories of the long-live chemist Michel Eugene Chevreul (1786-1889) who codified it in a book published in 1839.  Chevreul had partnered with the preeminent Gobelin tapestry company where he was the director of dyes.

Artists searching for new ways of painting,  Georges Seurat and Paul Signac developed a technique o in 1886 that relied on the ability of the human eye (and mind) to blend dabs of various colors into something new.   The term pointillism was coined by art critics and, as is often the case, it originated as ridicule.  Although the science has been superseded, artists have continued to find the technique fruitful. Achille Lauge was essentially a solitary artist whose combination of rigorous geometry and adroit use of pointillism produced  brilliant effets de lumiere

Occitaine, near the Spanish border on the Mediterranean, was first shaped by the Romasn occupation of two millennia ago; the region once included the southern third of modern France.  Its language and culture were a bouillabaisse of  Catalan, French, and Italian elements. Into this milieu Achille Lauge (1861-1944) was born to a family of peasant farmers.  His family sent him to Toulouse to study pharmacy but Lauge switched to art school in 1878. There he met a budding sculptor, Antoine Bourdelle, who encouraged Lauge to go to Paris for further study in 1882. Bourdelle went there himself to study with Rodin  and , in turn, later taught Albert Giacometti.

In Paris, Bourdelle introduced him to Aristide Maillol, a fellow southerner and the son of a fisherman, with whom Lauge shared a studio until 1888. Tiring of academic training, Lauge became interested in the pointillist paintings of Seurat, Signac, and Camille Pissarro,  He began to practice adapting the technique to his own sensibility, never adhering to Seurat's strict color guidelines. Deeply attached to his native landscape, Lauge returned home in 1888. During the period from 1888 to 1896, he produced some of his finest paintings.

Lauge's  paintings, exhibited in Paris at the Salon des Independents of 1894, were not well received by the critics;  la Revue Meridionale opined that " Carcassonne wants to impress Paris," referring to the little city where Lauge was then  living.  Another criticism leveled at his work was that it was imitative of other better-known artists, causing them to miss Lauge's unique combination of  "a very particular vision, much serene logic and a beautiful unity in your love of light."- (Antoine Bourdelle).  Finally, after repeated rejections by the Salon,  Lauge decided to have done with salons; from then on he would exhibit with dealers who supported his work like Bernheim Jeune and Galerie Georges Petit.   His work was also promoted by famous contemporaries  Pierre Bonnard, Edouard Vuilliard, and Toulouse-Lautrec. 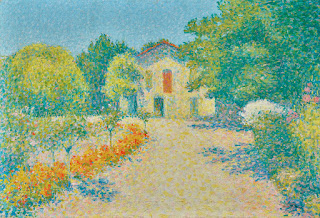 After his father died in 1895, Lauge moved back to Cailhau, home of his youth, in the sun-baked Midi.  His residence, L'Alouette (The Lark), at left is made of stucco, its large windows welcoming light into the artist's studio and it and the garden are awash in pure light awash with pure light.  Named for the lark, one of of the few songbirds that sings in flight.

He liked to work firstly outside both with pastels and oils, then move inside to apply dots of adjacent colors to get the effect he was after. In 1905, he constructed a caravan-studio that allowed him to paint outside in all kinds of weather.  He always painted still life  in oils and found inspiration in the Japanese art he had encountered during his time in Paris. The bright reds in this picture  remind me of ukiyo-e,  even though the  grapes and peaches  are quintessential fruits of the Mediterranean.

An artist who preferred to work in  tranquility, Lauge wa eventually recognized as an important and even pivotal figure in the art of his time.  His paintings are included in the collections of France's most prestigious museums - the Louvre and the Musee d'Orsay.