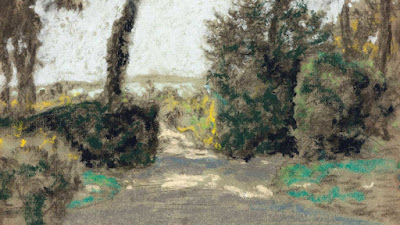 What we did not know

was how to translate it into days,
skies, landscapes,

into words for others,
authentic gestures.

But holding onto it for ourselves,
that was not difficult,

and there were moments
when it seemed clear to us
we ourselves were eternity."
- Guillevic, from Guillevic: Selected Poems, translated by Denise Levertov New York, New Directions: 1969,

Summer by the shore signals its presence with glimpses of sea and sky in patches of blue-ish white.    But it is the energy of yellow that conveys the excitement of sand between your toes, the smell of a briny breeze, at the end of the  path.


Ker-Xavier Roussel was in Sallenelles, a small village on the Norman coast in 1905 when he painted this pastel.  Nearby Deauville, well known from artists who painted its broad beaches  over and over again (realists like Gustave Courbet and Eugene Boudin to Claude Monet and Raoul Dufy).  With the extension of the railroad to Trouville in 1863, Deauville changed from a sleepy village to a vacation resort with a casino, numerous hotels and the well-to-do tourists to fill them.  But Sallenelles stayed off the beaten path with few visitors to disturb its two hundred residents.  This may have been its charm for Roussel, inviting the melancholy aspect of his personality.

Etude pour Lucy Hessel a Sallenelles en Normandie exemplifies Roussel's skill at depicting the effects of light filtered through trees and shadows on a sandy path. Deep green tree trunks and boxwood, punctuated by spots of bright, fresh greens. All made possible by his unlocking of the rich textures in the pastel stick.  Roussel's effet de lumiere give a photographic blur to the garden and, as we now know, Vuillard had taken up photography as a hobby, as had his friend Pierre Bonnard.

Nineteen hundred was a moment  when  the Nabis had gotten as much from small decorative paintings and the craze for Japonisme as they wanted;  the centrifugal forces of competing inspirations were drawing its apart. Printmaking and emphatic blocks of color were given a rest.  Already, in the 1890s, Ker-Xavier Roussel had began to experiment with pastels, and he found the medium increasingly congenial the more he used it.  Landscapes  in soft colors,  a melancholy tone, these attributes were reminiscent of the landscapes of Corot and earned Roussel the nickname  "the bucolic Nabi."

Roussel' first summered in Normandy in 1903, renting a house in  the village of Sallenelles.  His wife Marie's brother,  fellow Nabi Edouard Vuillard, was living nearby at Chateau-Rouge in Amfreville with a Belgian friend Jos Hessel.  Hessel's cousin, Gaston Bernheim, ran the gallery that was Vuillard's exclusive dealer.  Hessel's wife Lucy was Vuillard's favorite model and also his mistress for many years.  As Roussel turned more and more to injecting mythological stories into his landscapes, his bucolic scenes seemed to mimic the real-life dramas swirling around his circle. But for this Etude, Lucy was not yet part of the scene as she would be in the penultimate work.

Why Guillevic?  Eugene Guillevic (1909-1997), who went simply by "Guillevic" was from  the French coastal province of Brittany.

Hi, I wanted to tell you how wonderful is what you do here, on your blog. Sharing these detailed stories about art, accompanying them with dose of poetry, it's absolutely lovely. What an excellent job! Thank you for that! We need more beauty in our lives and you show it in the form of art and storytelling here.

Welcoe Paronomazje and I appreciate your kind words. Paying assignments are a bit thin at the moment so I may be posting more frequently for awhile. Do stop back everys o often and comments are always welomce