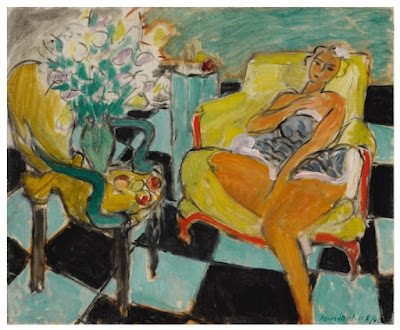 "There were very many wanting to be doing what he was doing that is to be one clearly expressing something." - Gertrude Stein, from "Matisse" (1912)
There is nothing extraneous in a painting by Henri Matisse.  He takes decoration to an aesthetic plane beyond anywhere it had gone before. However his technical panache can obscure the conventionality of his vision. Despite flirtations with cubism, futurism, and cubism, his vision of la belle vie was bourgeois.
The composition of The Yellow Chairs is  tripartite.  A woman reclines on a chaise lounge while an expansive vase of flowers rests on a chair positioned at right angles; the two are balanced by a pedestal table between the chairs.  As usual in a Matisse painting, spaces are collapsed; the great artist felt no need for traditional perspective.
The dancer evokes Matisse's frequent images of women as odalisques. Her arms are  two arabesques in a composition that marvelously combines angles and curves. Her bouffant dress (a tutu) is outlined in curvilinear white trim echoed by the white flower in her hair. At left an Italian baroque armchair has straight black legs and deep aquamarine arms.
For Matissse,  color was the vehicle he used to express his response to his subjects rather than being attempts at verisimilitude.  Here, as he often did, Matisse mixes in patches of white that give the vibrant colors a restless sense of movement, as though the sunlight had reached into the room to dapple its contents.The chairs are yellow, as thought they had absorbed the  Mediterranean light. The white tiles are painted in green and the black ones aubergine, green and purple being complementary colors as is the reddish-orange arabesque on the chaise lounge. His draftsmanship is breezy and deft black lines.
Henri Matisse was seventy-three when he painted The Yellow Chairs. The year was 1942 and the artist had returned home to his studio in Nice after the Nazis occupied Paris. The year before Matisse had been diagnosed with cancer and there were complications after the surgery that left him two choices: to sit in a chair or lie in bed.  But he continued painting although he would gradually switch to making cutouts.  Yet no trace of that suffering finds its way into The Yellow Chairs.
Image: Henri Matisse - Danseur dans un interieur avec carrelage vert et noir (Dancer in an interior with checked floor tiles), 1942, oil on canvas, private collection, Great Britain (?).
Posted by Jane Librizzi at 3:56 PM

Good on you... we don't often see late Matisses.

I have no problem with his spaces being collapsed and his perspectives being strange. And the woman reclining on a chaise lounge was fine in any case. But the large vase of flowers sitting ON a soft chair might have seemed a little too strange.

Hels, we have become comfortable with collapsed perspectives, in large part, thanks to Matisse. But it was not always so. Some contemporary critics objected vociferously, saying it spoiled the pictures. As to the vase o flowers, I like to think of it as a tribute from a fan that was delievred and had to be set somewhere.