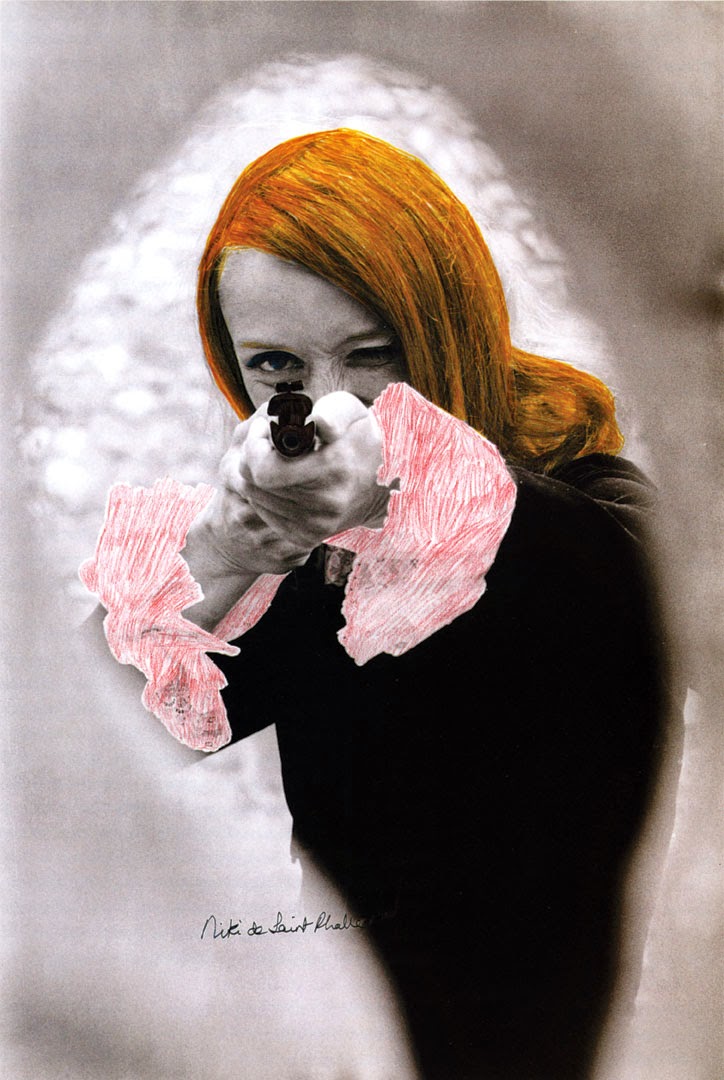 Larger-than-life papier mâché sculptures,  experimental films, performance art (shooting at paint-filled bags against a canvas): from all this, a selection of some 200 works that can fit inside a museum are on display this autumn in Paris at the Grand Palais, all  by the Franco-American artist Niki de Saint Phalle 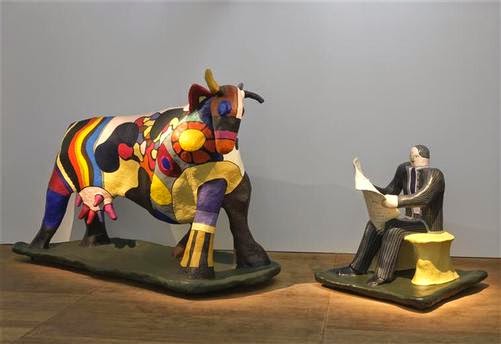 Born in Neuilly-sur-Seine and raised in New York, Niki de Saint Phalle was the daughter of a French aristocrat and an American heiress.   A teenager with the angelic face, Niki modeled for such international magazines as Elle, Harper's Bazaar, Vogue,  and Life. She refused the role of Queen Guinevere in Robert Bresson's 1974   film Lancelot of the Lake.
In the meantime, by the age of twenty-three she was married (to the writer Harry Mathews) and the mother of two children, when she had a nervous breakdown.  While hospitalized for six weeks in Nice, she began to paint.  Niki de Saint-Phalle said that painting provided a way to domesticate her demons.   “Without this, I do not like to think of what might have happened to me.”

Her early canvases were large, featuring drippings on a black background, more like speckles and flecks of color  than the rivulets made by Jackson Pollock. Saint Phalle also pasted various objects  onto her canvases;  her  work  came to be seen as part of Pop Art or the French Nouveau Reailsme, a group in which she was the only female member..
In 1955 while in Barcelona, Saint Phalle visited the  Parc Guell where she saw the fantastic architecture of Antonion Gaudi, The experience energized her to work, leading in her first exhibition  the next year at St. Gallen, Switzerland. 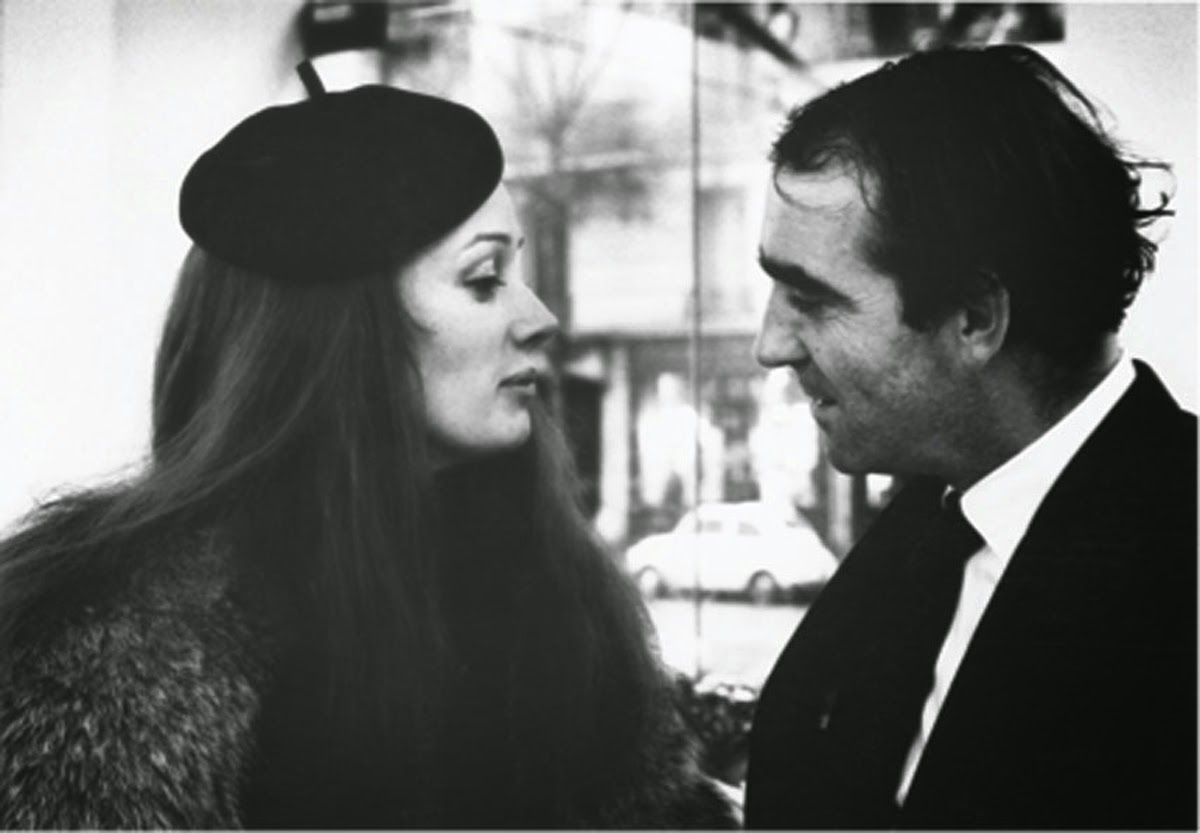 Her partnership with the artist Jean Tinguely (they married in 1971), which began in 1960 took on a mythical aspect.  They were dubbed  " the Bonnie and Clyde of modern art"   after a series of happenings (Tirs)  where audience members were invited to fire guns at paintings. Their joint creations, large and colorful, occupied public spaces (the Fontaine Stravinsky in front of the Center Pompidou  1983). Her monumental Tarot garden that opened  in Tuscany in 1998 was inspired by Parco del Mostri (Park of Monsters) in Bomarzo and  by the Watts Towers of Simon Rodda which she had visited in February 1962. 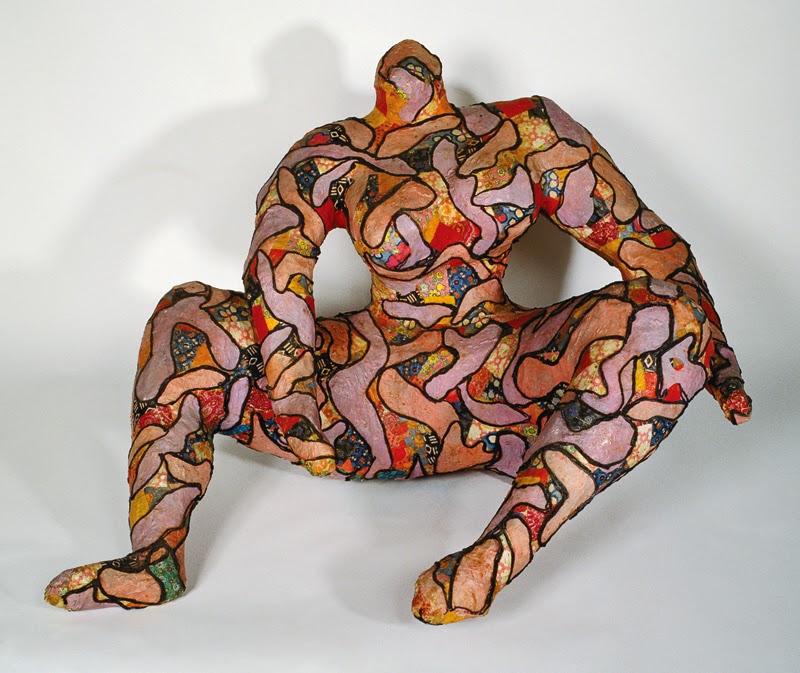 Saint Phalle had the original idea for  the  Nanas in 1965 while a friend was pregnant. The Nanas undermined the myth oa all-powerful masculinity with glee and seriousness.  The first Nanas, such as Benedicte, was the prototype of these giant sculptures,   multicolored paper, glue, wool and resin. Through their immense bodies  the artist re-imagined  the idea of a matriarchal society.  The largest Nana was Hon, a reclining figure that  filled on entire hall at the Moderna Museet (Stockholm) created with Jean Tinguely and Per Olof Ultvel, in 1966. The figure was destroyed at the end of the exhibition.
The next year at  an exhibition at the Stedelijk Museum, Amsterdam Saint Phalle announced: "Power to the Nanas.  We have  Black Power, so why not Nana Power? It really is the only possibility. Communism and capitalism have failed. I think that the time is ripe for a new matriarchal society.” 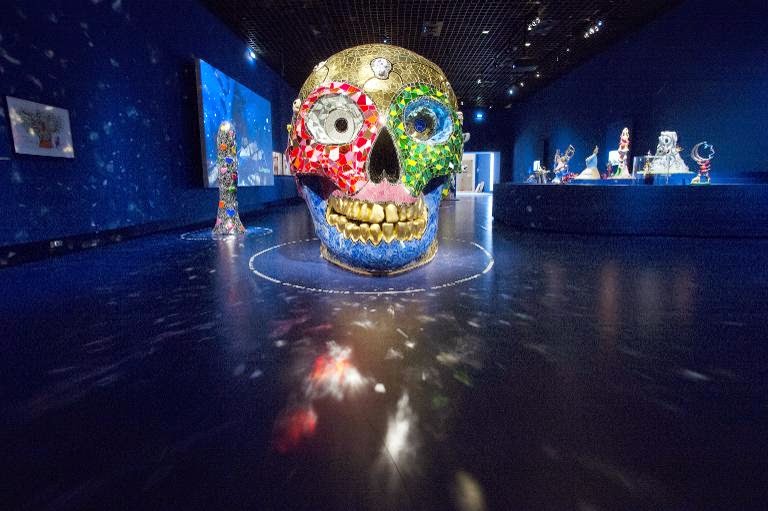 A  dark undercurrent runs through Saint Phalle's work;  she used bright colors and joyous fervor to deal with  painful experiences like  pregnancy, failed love, incest, and  violence. n 1972, when Saint Phalle made her first feature film Daddy  she alluded for the first time to the father-daughter incest she suffered when she was eleven. She wrote about it directly in her book My Secret (1994). She  was  not afraid to express "unfeminine" emotions like frustration and rage at the forces that economic and  gender inequality. She made her art from no small plans.   La Cabeza,a late work inspired by the Mexican day of the Dead, occupies a prominent place in the current exhibition, perhaps the artist's meditation on the respiratory illness caused by the effects of the materials she had worked with for so long. 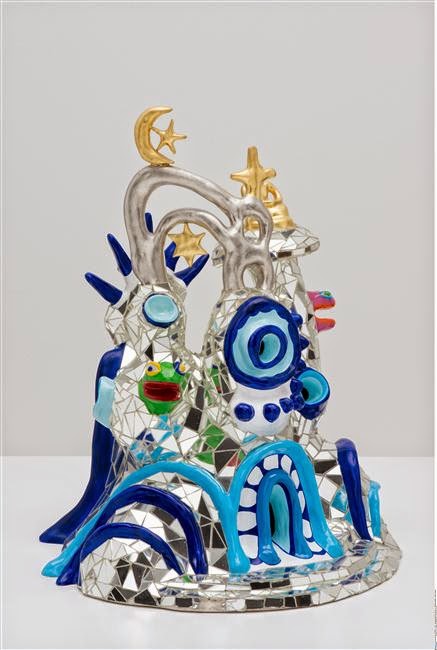 Art is not timeless, it must transcend time if it is to speak to new viewers, argued Andre Malraux in  Voices of Silence.  The art of Niki de Saint Phalle does.  Saint Phalle lived in a moment of optimism, a moment where possibility seemed to be exploding with a big bang, after being pent up by decdaes or war and depression.  She used imagery and ideas with an enthusiasm that is often absent from art today.  This too is a moment and her work is here to remind us that more things are possible than any one moment can contain.
Niki de Saint Phalle, born October 29, 1930. 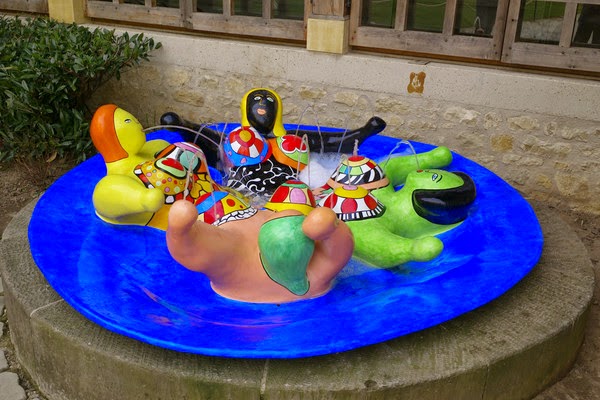 Posted by Jane Librizzi at 3:28 PM