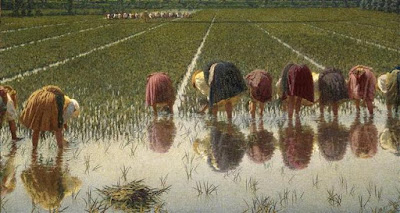 
Just in case the point needs to be underlined, that eighty cents was the daily wage in the Po Valley circa 1895.  Working conditions were so bad in the rise fields of the Piedmont that the women who performed this back-breaking labor had a name - they were known as mondine.  We  know there is a sky above by its reflection in the water the women stand in; the artist cleverly refuses to allow us any more respite than the women are allowed.  A lesser artist would have been constricted by the panoramic dimensions of the canvas.

The path traveled by Italian art in the 19th century is different from the triumphal march of the French that began with the Impressionists.  Stylistically, the Italians were all over the place and art historians have not been kind to them on this account.  Yet the late 19th century was full of lively experiment, more than the Italian peninsula had seen in centuries.   Silvestro Lega Emilio Longoni, Plinio Nomellini, and Giuseppe Pellizza da Volpedo, to name a few, were called Macchiaioli (meaning patches of light) as a way to describe their stylistic experiments.
Their idealism, found its subject in the economic upheavals that attended the political unification of Italy; their politics ranged from progressive to anarchistic.  The early 1890s were a time of  strikes in the industrial cities of the north, a protest against unemployment,  low wages for workers and poor living conditions for all.   Conditions were no better for the poor in rural areas; not for the new generation of Italian painters the heroic peasants of Jean-Francois Millet.

Why art historians prefer the  Futurists to other Italian artists, especially in light of recent history when the Futurists became all too sympathetic to the Fascist movement, remains an intriguing question.  One possible answer is that the Franco-centric version of art history for this period is a story, both admiring and satirical, of the rising bourgeoisie.  French artists were  forward-looking in their focus on the growing bourgeoisie, making pictures of agrarian life look old-fashioned.
Who remembers what the early Roman poet Horace wrote, that the purpose of art is to "instruct and delight?"    This idea has come to seem problematic.  Morbelli and his fellow Macchiaioli were berated from all sides:  for choosing ugly subjects rather than attractive ones and equally for making ugly realities beautiful in their paintings.   Even when socially-conscious art soars high above "agit-prop", as it does in the best Italian Ne-Impressionist paintings,  instruct or delight as it may,  its effects are uncertain.  We are moved by it, but to what effect?