Mary Frank: The Colors of Lament

"It is the duty of us all to ensure that our society remain that of which we are proud, not a society wary of immigrants and intent on their expulsion or a society that disputes the welfare state or a society in which the media are controlled by the wealthy."  - S.H.

"(But) there are unbearable things all around us.  You have to look for them; search carefully.  Open your eyes and you will see.  This is what I tell young people: If you spend a little time searching, you will find your reasons to engage." - S.H.

"The responsibility is that of the individual who will rely neither rely on a form of power nor on a god.  You must engage - your humanity demands it." - S.H. 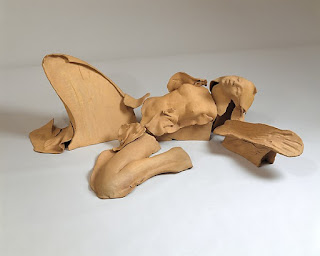 The late Stephane Hessel (1917-2013) was  a German Jew, born in Berlin.  Both his parents were writers; his father Franz Hessel was also a translator and his mother Helen Grund was also a painter and a musician.  The family moved to Paris in 1924 and Stephane attended the Ecole Normale Superieure.  Drafted into the French Army, Heseel joined the National Coiuncil of the French Resistance in 1943.  He was captured by the Germans and sent to Buchenwald to be hanged just twelve days before the liberation of Paris, but after two tries he escaped.  After World War II ended, Hessel represented France as a diplomat and official observer at the Universal Declaration of Human Rights in 1948.   His humanitarian efforts could fill a book.  His words, reprinted above, come from one  of his last books, Indignez-vous! 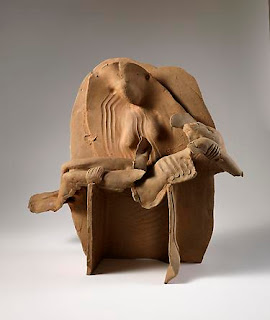 “Mary Frank reveals herself once more to be the visual poet of the inner life, evoking the pain and the mystery of our human embeddedness in the natural world. She is not afraid of the large subjects, nor is she reluctant to deploy her extraordinary skills as a creator of memorable imagery in the service of our darkest memories: death, chaos, loss, fragmentation. Nor does she trivialize tragedy and terror by suggesting some easy redemptive value to be obtained from their contemplation. Rather, the artist confronts this darkness of the spirit and wrestles it into vivid pictorial expression."
- Linda Nochlin, 1998

Mary Frank (b. 1933) is an English artist who began by studying dance with Martha Graham.  Although her mother was a painter, Mary is a mostly self-taught artist.  Frank's sculpture seems to me to be her very finest work generally, giving the viewer a sense that her human subjects are embedded in the natural world.  They remind me of Baruch Spinoza's vision of the divine as existing in the workings of the natural world;  in his A Theological-Political Treatise (1670).