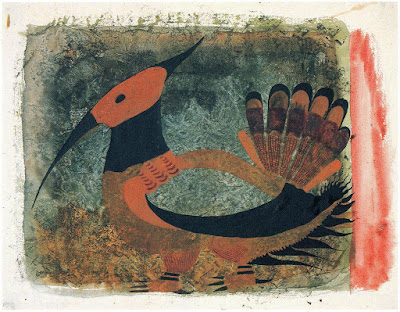 "Art is not what you see, but what you make others see,"   said Edgar Degas.  Some of the others who have seen the paintings of Eugene Gabritschevsky have claimed to see in them pictures of flatness and lack of emotion; yet I see signs of emotion everywhere in his work.   Affectionate regard for the crested bird (above), a witty rethinking of the butterfly, based on his experiences with Rorschach ink blot tests while in a sanitarium, and a fantastic bestiary of tiny creatures based on his years studying insects under a microscope: three instances, but there are others of a darker bent. 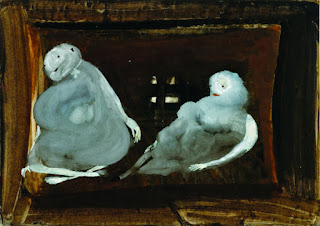 Gabritschevsky's paintings are filled with living presences, some  human, others  are all manner of hybrid fantastical beings.  Eyes, in particular, are everywhere, in faces or even embodied in plants composed of nothing but eyes, a sad commentary it seems on the loneliness of a solitary man watched constantly by doctors and nurses yet disconnected from human intimacy.  Surely for social creatures as we humans are, this is the worst fate, to shrivel uncared for and untouched.  You may notice that the light in Gabritschevsky's pictures that comes from below, as in a theater, and the frequent suggestion of a proscenium arch serves to underline the dichotomy between presence and disconnection.
Some critics have dismissed Gabritschevsky's human characters as grotesques but I disagree; only a lack of empathy can explain such blindness.  Only look at the man and woman in the untitled painting (above).  Together yet apart, their bodies contorted with opposing impulses of fear and longing, they have both stretched their heads away from each other yet make no move to leave their shared space.
Gabritschevksy was born into an upper class Muscovite family in 1893.   Gabritschevky's father was an internationally known bacteriologist; he died when Eugen was fourteen, the first of a series of shocks that challenged a precarious emotional equilibrium.  The revolutionary violence outside in the city streets only intensified the caesura between childhood and whatever would come next.  A privileged education given by tutors including study of languages and a love of drawing were his sources of strength. 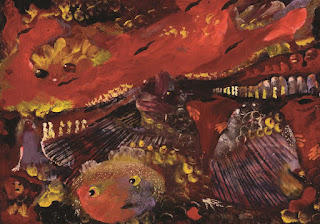 Gabritschevsky studied biology at the University of Moscow, growing fascinated by the world revealed by a microscope.  He took a research position at Columbia University in 1924 but two years later  returned to Europe, settling in  Munich where his brother Georg now lived.  A failed love affair with a Frenchwoman and the death of his mother in 1930 were setbacks but  Gabritschevsky  took a new position at the University of Edinburgh.
The next year Gabritschevsky had a nervous breakdown and was hospitalized in Zurich, where he was diagnosed  with schizophrenia. Eventually he was able to be  transferred to a hospital near Munich where he spent most of his remaining life. One more shock was in store;   during WWII  mental patients were locked in underground cellars by order of the Nazi authorities, with what effect on  already scarred sensibilities we can only imagine.
He lived out his lonely existence but painting expanded to fill the solitary hours with a stunning output of works unconstrained by the dictates of the art world; what remained a constant was the impression of a spirit ill at ease in the world.   If it were not insensitive and cruel, we could see in Gabritschevsky's later work a mind set free, but Gabritschevsky himself is there to remind us not to be so facile, with these words from a letter written in 1946 where he assessed his paintings as: “merely misshapen offspring of ideas that are more or less true.”    Gabritschevsky continued to paint up until his death on April 5, 1979.

It was Georg who sent a few photographs of his brother's work to Jean Dubuffet in 1948, at a time when Dubuffet himself was restless and searching for new sources of artistic inspiration.   Already under the spell of  Artistry of the Mentally Ill (1922), an influenital work written by German art historian-turned-psychiatrist Hans Prinzhorn. Dubuffet had coined the term Art brut  and he thought he had found  an example  in Gabritschevsky.  The term Art brut has never been without problems, in its opposition of academic tradition to self-taught and otherwise socially disadvantaged artists.   And although Dubuffet went on to purchase many  of  Gabritschevsky’s works for his Compagnie de l’Art Brut and to recommend the older artist to his  dealer friends, the one-sided connection with the famous Dubuffet has continued to color views of Gabritschevsky to this day.
Eugene Gabritshcevsky (1893-1979) is on view at  La Maison Rouge, a private foundation specializing in contemporary art,  July 8–September 18. 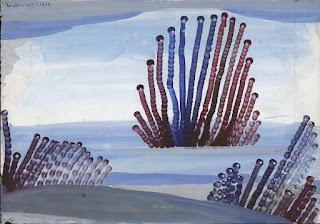 Posted by Jane Librizzi at 2:06 PM

Very interesting, Jane. I did'nt know this painter, thanks for the link.

Tania, the loneliness in his paintings seems so obvious to me. I was surprised to read that some critics completely missed it.