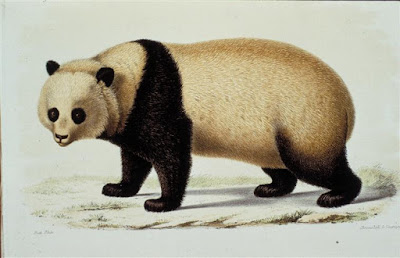 What would the world be, once bereft
Of wet and of wildness? Let them be left,
O let them be left, wildness and wet;
Long live the weeds and the wilderness yet.
- excerpt from "Inversnaid" by Gerard Manley Hopkins (1881)

The mountains of southwestern China are certainly wild and wet; in photographs they are lapped by rivers of mist.  Sichuan,  the name of the province that means the land of the four rivers, is the place where the Himalayas drop down toward the river basin.  Rugged and remote, it has long held tight to its secrets, its variety of plants and animal species unknown to the larger world.  But, every now and then, for two thousand years, those who made the difficult journey to Sichuan returned with stories of marvelous, elusive plant-eating animals.

Panda is the Nepalese word for "bamboo-eater."   The giant panda is a bear; the red panda is either a cat or a raccoon, a question that has remained since  Frederic Cuvier saw his first red panda in 1825.  Then, in 1868, another Frenchman,  Armand David, arrived at a village in Sichuan  to teach at a Jesuit school there.  What Pere David learned there made him famous, identifying  and classifying hundreds of plants, birds, and animals.  Thanks to him, the gerbil and the giant panda entered our world.  He was  also a pioneer in the study of animal geography, a discipline that has contributed to bringing back the giant panda from the brink of extinction.  For a long time after Pere David brought word of the panda back to France, they called it" Pere David's bear."

We did not mean to endanger pandas, we admired their gentle habits but we encroached on their territory, cutting down the trees where they carved out their birthing dens and turning the land to farms, driving them ever higher into the mountains, where it was colder and less hospitable to bamboo.  What wondrous lines might another Jesuit, Gerard Manley Hopkins, have given us if he had been to the haven of the giant panda?

Had nobody in Europe heard the word panda before? In those earlier, vague references, were there drawings attached to the diaries and reports?

It would be such a thrill to identify and name a new creature, and to go home and teach everyone about the discovery.

Hels, it's unknown if anyone outside China knew of the existence of the giant panda before Pere David. It seems not, although the school the Jesuits built opened in 1831. Because giant pandas lived in the high forested mountains, few people went there, much less lived there. I have a Chinese brush painting of a panda cub that was given to me by a journalist who covered the 2008 Beijing Olympics. It is a new picture; my friend was told that there are very few genuinely old pictures of pandas known to exist. After all that, to think that Pere David also "discovered" gerbils! A rare life indeed.