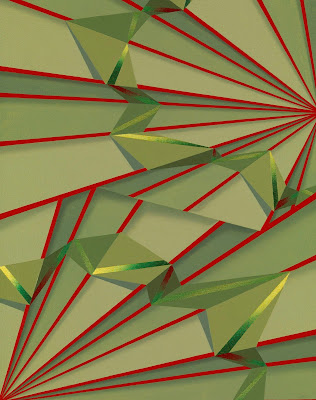 Like going the wrong way on a one way street, the paintings of Tomma Abts zigzag, make sharp turns, and seem to double back on themselves, all on two dimensional canvases.  Their angularity has been likened to origami and their twists and turns seem to express high torque.

Abts practices what some critics refer to as geometric abstraction (think of Piet Mondrian's  Broadway Boogie Woogie), opposing it to expressive abstraction in the drip paintings of Jackson Pollock, for example.  At heart, geometric abstraction is an optimistic style,   its belief in rationality buoyed by painters' efforts to create a truly international visual language.  As  so often happens,  these two competing schools have much more in common than their squabbling suggests.  Abts knows these predecessors but she finds ways to come at geometric shapes from odd angles, combining elements that overlap and underpin each other, something that is easier to see in person where the layers of paint are a visible, tactile element. 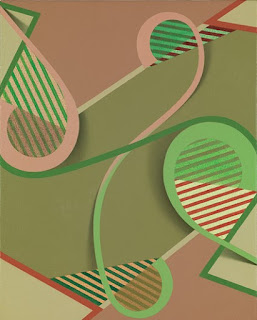 Her paintings are all the same size: 48 cm x 36 cm (a 4 to 3 ratio). Their surfaces are painted, scraped, embellished, and polished and, although it is difficult to see in reproductions, there is an animated quality to them that may make the viewer think of Pop Art.  The way the artist manipulates the lines as she puts them on canvas tricky, in the way that an Escher is tricky.  Her method has evoked unusual attempts at description: Andrian Searle, writing in The Guardian, compared an Abts painting to driving the wrong way down a one way street.  The way she gives them titles that have no recognizable meaning to outsiders; perhaps given how long she labors over each one they are names, as in old friends.

Sometimes the lines in an Abts painting appear to be raised above the canvas in a third dimension.  The green and yllow lines that zigzag downward in Inte look like lightening or fractured light rays.  Another painting, Oke, could be music made visible,the looping curves staves weaving in and out of one another and overlapping as instruments do but words rarely can.  You get to decide whether pink an d mauve or olive and spring green best represent the treble or the bass clef. 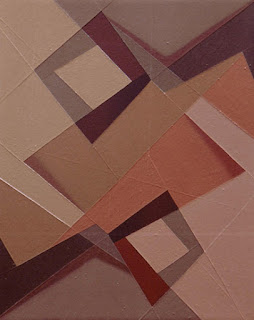 Her colors are enigmatic, too, evincing undertones of gray.  Primary colors are almost never present as they are in Mondrian's pictures, making an impression on the viewer suggesting the faded Japanese woodblock prints seen by  Europeans in the 19th century.

Tomma Abts was born in Germany in 1967 and attended art school in Berlin before moving to London in 1995 in search of a more stimulating artist community.  She won the much sought after Turner Prize (bestowed by the Tate Gallery) in 2006.  The prize, first awarded in 1984, was named for the 19th century British painter J.M.W. Turner.

An exhibition of paintings by Tomma Abts is now at the Serpentine Gallery in London and will travel to the Art Institute of Chicago in October.

The first illustration looks like a stained-glass window, surprising! (Thanks fort NYT)

Tania, yes. So does the third one and some others of Abts' paintings. I think the likeness may arise (no pun intended) from her way of building up layers of paint. This effect would be easier to see in person than in reproductions, but we take what we can get.