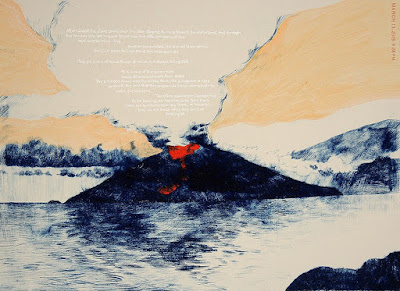 When I was six years old I was given a book on world geography for my birthday.  Through it I discovered  the existence of volcanoes, something so much at odds with what I knew of the familiar terrain of northeastern New Jersey that I balked at the revelation.  I couldn't think through this information and so I began to imagine that volcanoes could erupt anywhere at anytime.  I worried over the smallest hillocks to the point that my parents had to flash a light over my backyard sandbox each evening that spring to assure me that no eruptions were sneaking up on Brookwood Road.  Only with time did I realize that my reaction was part of a long history of humanity's attempt to wrestle with the inexplicable.

Volcanoes are older than humanity, their eruptions are awe-inspiring displays of terrestrial outrage, yet, paradoxically, it is their effluvia that carry the minerals that enrich the surrounding soil and make human agriculture possible.  Catal Huyuk, thought to be the first human city, flourished in Anatolia (now eastern Turkey)  around 7000 BCE on a volcanic plain.  The perturbations of Mount Etna (Sicily) and Vesuvius (Naples) and their lesser siblings cast a spell over classical mythology, among the earliest recorded literature. 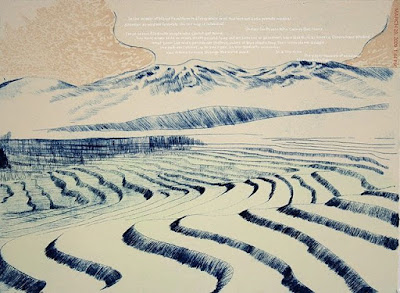 The Tale of the Bamboo Cutter, from 10th century Japan tells of a goddess who buries the elixir of life at Fuji's peak, hymns the perfection of its symmetry.  In a neat bit of irony, only men were allowed to ascend to the top where its spectacular views could nourish the spirit.  Mountain climbing is a form of spiritual pilgrimage for the Shinto believer and Buddhism also affirms similar intimations of immortality .

Katsushika Hokusai's album Thirty-Six Views  of Mount Fuji (c.1830-1832) was the first to spread the image of the sacred mountain beyond Japan.   Not to be outdone, Ando Hiroshige also published his Thirty-Six Views in 1858.  By the early 1890s the mountain was so well known that the public was ready for Yoshitoshi's tongue-in-cheek parody Thirty-Six Bizarre Selections of Transformation.  With hindsight, Yoshitoshi, whose career bridged the end of the Edo Period and the beginning of the Meiji Restoration, stands as the last great Japanese master of the woodblock (ukiyo-e) print. 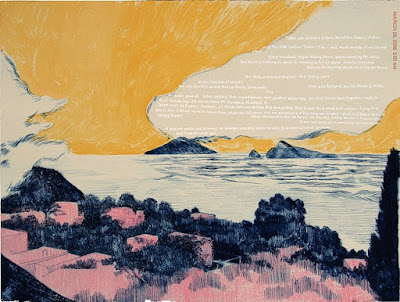 Serena Perrone's A Volcano Pilgrim in Exchange for Fire is a contemporary series of 21 prints that align to form a continuous work some 25 feet long.   Recognizable accuracy of individual volcanoes is blended at the edges of each with an otherworldly license made possible through abstraction.  In Japanese ukiyo-e refers to an imaginary floating world and Perrone's series melds into its own floating world. The individual prints show active volcanoes in Italy, Central and South America and, most recognizably, Mount Fuji.  The spume blowing from each volcano contains bits of text taken from a travel blog written by poet Craig Arnold during the days preceding his death in 2009.  Arnold was hiking and doing research for a book of poetry he was working on which was to have been called An Exchange for Fire.   Arnold  (b. 1967) and a winner of a Yale Younger Poets Award for his first book published in 1999.  He disappeared while exploring the volcanic island Kuchinoerabujima in the China Sea off southern Japan on April 27, 2009. His body was never found and  Arnold was presumed to have fallen to his death.

Perrone describes her intention for this hybrid of images and text: "Moving geographically from Italy to Japan as they move chronologically  through time from his first blog post to his last, the 20 prints in this series chronicle the 20 days on which he wrote  during his Japan expedition." She hopes that her prints, by finding a permanent  home at the Metropolitan Museum "will be enjoyed by generations to come, and the words of Craig Arnold will continue to reach new audiences."

Serena Perrone is Assistant Professor of Printmaking and Drawing at the Pratt/ Munson-Williams-Proctor Art Institute in Utica, NY.

Images:
Serene Perrone - from he series  A Volcano Pilgrim in Exchange for Fire, c.2009-2010  -  dry-point, gouache, monotype and letter press on paper, Metropolitan Museum of Art, NYC.
Posted by Jane Librizzi at 12:20 PM

Thank you for writing this lovely piece and for sharing your insight into some of the historical precedents that have inspired my work. It was so nice to find your blog!

How nice to hear from you and congratulations on creating this beautiful work. Your message reminded me that I should have pointed out (and I just revised the text) to underline how your sequence creates a new version of the "Floating World" of ukiyo-e. Evanescence is the word that occurs to me.