Working Girls: 'Tis the Season to be Hard-Boiled 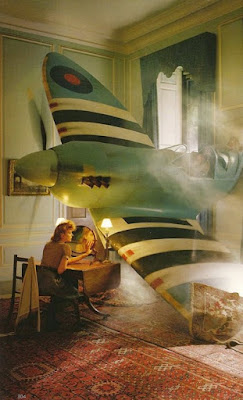 A plane crashes into your boudoir?  These things happen.  A girl needs to finish her makeup before she greets the day; this is hard-boiled.  A school girl's riddle from my mother's high school days goes like this:  why do males disappear before Thanksgiving and only reappear after New Year's?  If you have heard this one, know the answer, and smile ruefully,  then you are hard-boiled.

The hard-boiled  attitude was first sited in Manhattan, post-World War I, when New York became  the first truly sophisticated American city and a mecca for women looking for personal freedom. Before the New Yorker  was founded in 1925,  the  Canadian Stephen Leacock had wondered in the pages of Vanity Fair (1915) "Are the Rich Happy?"  A difficult question to answer, he discovered as he had trouble finding them.

"Very often I have thought that I had found them, but it turned out that it was not so.  They were not rich at all.  They were quite poor.  They were hard-up.  They were pressed for money.  They didn't know where to turn for ten thousand dollars."

When Dorothy Rothschild Parker, as she was then known, began to appear in the pages of Vanity Fair it was with a series she called "Hate Poems,"  verses on a variety of subjects written in what came to epitomize the satirical attitude of the newly emancipated young woman.  Office life, actresses, poseurs, retrograde relatives and, of course, men all came under her withering gaze.  Although only twenty-three in 1916, Parker was herself already a walking anthology of sharp edges.  "Husbands" in her words  were "The White Woman's Burden," concluding "I wish to Heaven someone would alienate their affections."

It was not until 1926 that Frances Newman from Georgia published a novel  titled The Hard-Boiled Virgin. Her second novel Dead Lovers are Faithful Lovers was published two years later.  It was the titles that seduced me when I discovered Newman's books in college. What I found was a neglected literary modernist whose layer cake of time and space was a bit like Virginia Woolf, and a writer whose use of interior monologue rather than dialogue to move her plots along, was a bit like Dorothy Richardson's multi-volume bildungsroman, Pilgrimage, begun in 1915.

The daughter of a prominent Atlanta judge, Newman was educated in finishing school, in anticipation of a genteel career as a librarian.  But Paris and the Sorbonne changed her mind.  Newman finished writing her first novel at twenty-three but was never able to get it published.  Undeterred, she kept writing and when The Hard-Boiled Virgin was published it was hailed by the eminent critic James Branch Cabell as "brilliant" for its portrayal of a young woman who chooses independence over marriage.  Two years later when Dead Lovers are Faithful Lovers appeared it caused a scandal; Atlantans were outraged to find  southern misogyny and racism personified in an angelic wife bested by a seductive other woman.  When Newman died at forty-five, the guardians of morality in literature were happy to forget her.

Deborah Garrison is a working girl for our time and if we thought the hard-boiled attitude was outdated, consider that the poems in A Working Girl Cant't Win have been characterized as "blatantly honest."

I'm not hard-boiled (or female, for that matter). What's the answer to the riddle?

Welcome, Caspar. The answer to the riddle is that boys don't want to meet your family at Thanksgiving, don't want to have to figure out what kind of present to give you at Christmas, and don't want to spend all that money to take you out on New Year's Eve. Just writing it out makes me want to disappear, too!
Whatever holiday you celebrate, may this be a season of peace.
And thanks for visiting Blue Lantern.