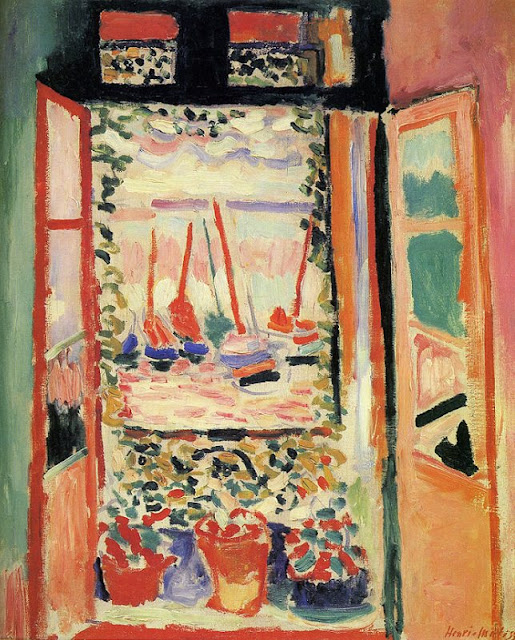 "I believe that painting will make me crazy,  and I am going to try to get out of it as soon as possible."    - Henri Matisse, from a letter to his friend Henri Manguin, late summer, 1904

The sky visible through the two small windows above the dormer is red with heat.  The geraniums in the terracotta pots on the windowsill are red, too.  Nothing outlandish there - but what about the sails on the boats in the harbor?  And notice that the sky as reflected in the window glass i blue as one would expect.  We are in the presence of a new way of painting, colorful but not in the controlled (and supposedly scientifically based color palette of the pointillists: think Seurat an company.  What caught my attention first, though, was the suggestion of clouds, those blue, pink, and lavender squiggles dancing across the top of the view from Matisse's window.

It is thanks to the critic Louis Vauxelles that the pejorative term Les Fauves (The Wild Beasts) attached to the painters at Collioure in 1905.  The Fauve moment lasted about four years, from 1904 until 1908 when it was overtaken by the renewed interest in form that became known as Cubism.  Vauxelles and his contemporaries had the work of Vincenr Van Gogh, then gone a decade and a half, fresh in their minds.  Van Gogh's colors may have originated in hallucinations; speculation abounded and does to this day that his distorted geometries crossed the line from genius to insanity and Matisse may have had this in mind when he vented to Manguin.
Matisse first summered on the Mediterranean at Saint-Tropez in 1904 and then in 1905 he came to Collioure, a sleepy little fishing village perched below hills, near the border with Spain.

Matisse, as painter, deliberately avoided  putting his fleeting impressions on canvas, choosing instead to "risk losing charm in order to obtain greater stability."(quoted in Notes of a Painter, translated from the French by Jack D. Flam, New York, E.P. Dutton: 1978)  Matisse had no interest in mimesis  when choosing his colors, to him their brightness was an obvious correlation to the directness of the Mediterranean sun: thus also the lack of shadows in his paintings.  Also, his brushwork was so loose that his forms veer toward abstraction.

Artists may tire of repetition sooner than the pubic appetite for the familiar.  As early as 1873, a guide book for vacationers lamented that destinations on the Normandy coast like Trouville and Sainte-Adresse were little more than "Paris transported for two or three months to the seacoast" (Adolphe Joann) with its attendant frivolities and vices.

When Open Window at Collioure was exhibited for the first time at the Salon d'Automne in 1905 its  colors were described as "primitive" but look closely and their application is anything but unsophisticated.  The way that landscape and  building are intertwined is ingenious.
This seemingly simple style is well-suited to the rustic landscape.

Posted by Jane Librizzi at 3:50 PM