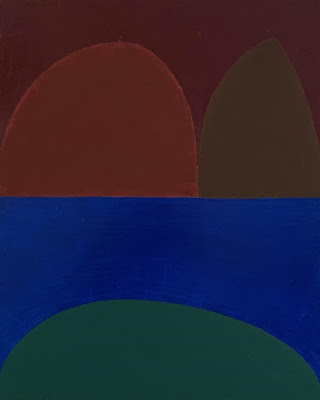 Subtle and meticulous compositions, Susan Frecon's large scale oil paintings contain shapes and curves familiar from art of the Italian Renaissance. There is a sense of stillness permeating these images, recalling the hush of a cathedral where Frecon encountered them. Her passion for the period extends to her use  of Piero della Francesca's platonic forms, visible in the veil in one her favorite works, the Virgin Annunciate (circa 1476) by Antonello da Massina.

Painted in the last years of his life when Massina had returned to his native Sicily, it is his masterpiece, the mysteries of the spirit contained in a rectangle.  The Virgin stands at a lectern, her head draped in a veil of lapis lazuli. Her hands suggest ambivalence, rather than the radiance portrayed by other artists; there is no welcome in them, rather they hold the viewer and the angel at bay. The pitch black space that surrounds her is as abstract as anything Frecon paints.  Vasari wrote in Lives of the Artists that Massina had introduced oil paint to Italy.  Frecon saw the painting at its home in the Palazzo Abatellis in Palermo. 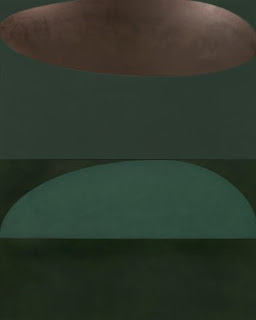 In Renaissance painting terre verte was used in under-painting of flesh.  The color of moss, this "green earth" was also used to connote death.  Also lapis, or ultramarine, was often used to color the clothing of a painting's central figure, especially the Virgin Mary.  What Frecon does with this is to use the colors without retelling the story.

When Frecon saw the Virgin Annunciate  it was mounted on a green velvet wall; she says that she was immediately struck by the colors. "(W)hen I was looking at the painting, its smooth blue shape floating near the top, on a green ground. I was struck by the fact that the blue form seemed hard and the green appeared soft, and, yes, velvety.  The blue form felt impenetrable while the green ground was inviting."

Color, form, and feeling have replaced outright story-telling in Frecon's work and her sense of color is uniquely her own, just Mark Rothko's was. "I need to mix the colors myself; I need to know how the colors feel..."

Susan Frecon (b. 1941) is an American artist who lives and works in New York. She studied art here and abroad, at the University of Strasbourg and then at the Ecole Normale Superiere des Beaux Arts in Paris. Her paintings are in the collections of the Museum of Modern Art and the Whitney in New York, in the National Gallery in Washington, D.C., the Fogg Museum at Harvard University, and in the Menil Collection in Houston, home of the Mark Rothko Chapel.

You make me discover this artist, Jane, and these mysterious curves.

Tania, I hope you can see her work in person someday.
I share Frecon's admiration for Renaissance artists.