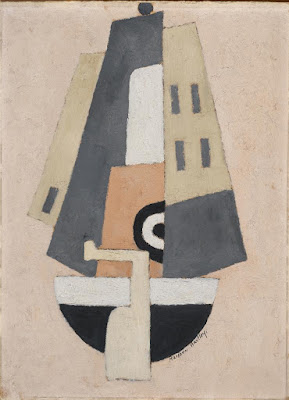 "Spirit is awareness, intelligence, recollection. It requires no dogma ..."   -    George Santayana,  excerpt from Platonism and the Spiritual Life.(1927)


It may not look so to us now but this painting was radical when it  was painted by Marsden Hartley in 1916.  It would be ten more years before other American artists would follow his example down the
non-objective path. The boy who grew up in a small industrial city in southern Maine went on to  become one of the most cosmopolitan of American artists.

Hartley spent the summer of 1916 in Provincetown and the winter in Bermuda.  Provincetow was crowded that summer, not only with painters like Hartley's friend Charles Demuth and William  and Marguerite Zorach but the journalist John Reed was summering there.  Four years later Reed  published his eyewitness account of the Russian Revolution, Ten Days That Shook the World. And so, when Warren Beatty produced the movie Reds, his  version of those events in 1981, there was a cameo appearance ny "Marsden Hartley."

Something about sun and the water  inspired a series of paintings of sailboats in which Hartley worked out his response to cubism.  The colors are uniformly muted, pale shades of blue, pink, yellow, and beige, accented by touches of white. Hartley outlined the forms with soft graphite  pencil , allowing the colors to merge over the lines. The sails are precisely drawn; they unfurl in overlapping planes, giving just a hint of perspective. Windswept, the sails are all angular blocks of color, balanced by the curve of the hull and an unexplained half bullseye on the sail.  They are tethered to a mast that has been reduced to a thin line ending in  a small black knob touching the top of the canvas.  The rudder and  tiller at bottom Combining  rectangular and rounded elements, the rudder and tiller anchor the sailboat in an indeterminate, colorless setting. Thus, the boat sails, but not visibly on water.

Marsden Hartley (1877-1943) grew up in Lewiston, Maine, the youngest of nine children born to English immigrant parents. After his mother died and his father remarried and moved to Ohio, the boy was left behind to work in a shoe factory. Reading took Hartley, whose given name was Edmond, out of his lonely world into the expansive world of  the Transcendentalists,  Emerson and Thoreau,  and  the ecstatic Walt Whitman.

Hartley's first solo exhibition in 1909 took place at Alfred Stieglitz's 291 Gallery in  New York.  Despite Stieglitz's many art world connections, having him as dealer was not an unmixed blessing; he was manipulative and often unreliable.  But at 291 Hartley got his first look at paintings by  Matisse, Picasso, and Cezanne.

In middle age Marsden Hartley discovered the work of the Harvard philosopher George Santayana whose Platonism and the Spiritual Life.(1927) made a deep impression on the artist.  Hartley was what we would now describe as a deeply closeted homosexual and a bred-in-the-bone New England puritan.  Santayana, who published The Last Puritan (1935), a novel in the form of a memoir, was seemingly so far inside the closet that no one has ever been able to determine if he had any sexual relationships at all.

Alfred Stieglitz might have been a problematic dealer but without him, Hartley's first solo exhibition might not have taken place for ages... or in such a great location. And as you noted, Harley's entire art world was opened up by exposure to Matisse, Picasso and Cezanne. Many people owed Stieglitz a debt of gratitude.

Hels,hat's how things work sometimes, do they not? Some good comes along with some not so good. Hartley's art changed direction again in his later years, becoming overtly sexual in its implications, whether in landscape or still life. I was taken with these cubist boats of his, so different from the still lifes I have seen liked from the first decade of the century. To borrow a quote from Walt Whitman: "I am vast. I contain multitudes."