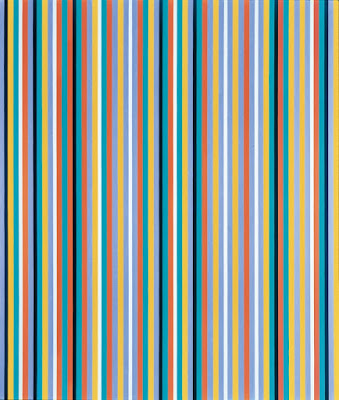 "In the next country over, the lotus
is chocolate brown and grows tall

as maize. The sole religion seems
to be bread, any kind, including

one similar to rye, but made of lotus."

-  excerpt from "East of Here" by Idra Novey, in The Next Country, Farmington, ME, Alice James Books: 2008


Spend five minutes with a painting by Bridget Riley and you will begin to see it move, relationships will appear and dissolve before your eyes. It is like an experiment I remember from art class: the instructor asked us to stare at a large red square for thirty seconds and then turn our eyes to the blank white wall next to it.  Et voila! An elusive green square shimmered before our eyes.
Riley's art is classified as Op Art but it is at heart participatory art. The artist intends her paintings as experiences rather than mere static images. The longer you look the more you can see the colors reacting to one another. Riley has said when she began painting she wanted to do something with light reflected on water as the Impressionists had done, but by other means.

The British Bridget Riley (b. 1931) spent an extended time traveling in the 1980s.  Her sojourn in Egypt inspired a series of paintings she called "Egyptian Stripes." They contain colors Riley saw in tomb paintings, the Nile River (hence Cool Edge), and the vernacular  architecture. Still abstract, yet different in effect from the hard edged black and white paintings that brought her to public attention in the London of the 1960s, more recent works  present more subtle interactions.

A retrospective exhibition held last year at London's Hayward Gallery began with paintings the young Riley made to analyze how Georges Seurat's pointillism worked. Riley paints the way the eye sees, moving across shapes and colors. She has always played with the  relationship of intensity and tonality (light and dark) of color.  For all her intentional experiments based on the physiology of the eye's workings, color is the beating heart of  Riley's art.

It's not easy to look at these colored stripes for a long time - enough to observe the colors that come closer and those that move away from us.

Tania, you've got it. It's an experience of its own.