From An Old House In Belgium: Vincent van Gogh 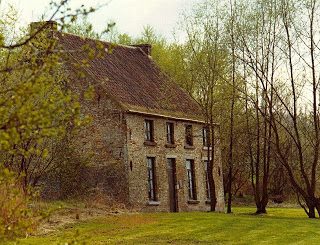 "Art is the highest form of hope." - Gerhard Richter. This New Year think of Vincent van Gogh's search for hope.

In 1878 van Gogh came to the Borinage, a coal mining region in southern Belgium, where he had been assigned to minister to the people of  the village of Cuesmes. At twenty-five, Vincent's trajectory in life seemed to be heading determinedly downward. The eighteen year old who had shown such promise as an art dealer at the prestigious firm of Goupil et Cie in Paris erred by  revealing his wealthy clients his candid opinions of the works he was selling. He liked to read so he tried his hand at bookselling in Amsterdam but ignored potential customers.  Then, thinking he could  follow in his father's footsteps by becoming a minister, Vincent only succeeded in putting his parishioners to sleep.  And so he was consigned to the lowest work the church offered, as a missionary to the poor coal miners of Cuesmes.

Persuading an elderly miner to take him down into the mines, van Gogh entered a living hell, a bee hive of cramped chambers where entire families labored  because women and children were smaller than the men, and could navigate the narrow passages more efficiently.  Emile Zola's masterpiece Germinal, published in 1885,describes their plight in harrowing detail while Misere au Borinage, a famous documentary made in 1933,  showed how little had changed since  van Gogh's time. 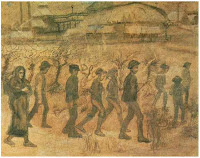 While conducting bible studies in the homes of the miners, van Gogh was stricken by their squalid living conditions.  He became obsessed with the desire to share their plight, giving away his clothes and food and even going so far as to give up bathing so that his skin would be permeated by the grime that the miners could never  seem to wash off. Vincent's identification with the  suffering of others lacked boundaries and so it would be, sometimes, with ruthlessness. The same Vincent was capable of killing a  butterfly the better to paint it.

When a church official named Rochedieu (means Rock of God - a name fit for Pilgrim's Progress!) came from Brussels on an inspection tour, he was horrified by van Gogh's condition and sacked him on the spot. Losing yet another job when he yearned to give of himself to others devastated Vincent. (It was the inability of his French-speaking superiors to spell van Gogh correctly that led the artist to refer to himself as Vincent.

Van Gogh had been living in a little miner's house where he retreated in despair for a year.  It took another year of struggle for him to assemble a group of drawings to take with him to Brussels; his letters to his brother Theo describe how, through his anguish, Vincent found his vocation.

"Now, if you can forgive someone for immersing himself in pictures..."
"So please don't think I am renouncing anything, I am reasonably faithful in my unfaithfulness and although I have changed, I am still the same, and what preys on my mind is simply this one question: what am I good for, could I not be of service in some way, how can I become more knowledgeable and study some subject or other in depth?"
- excerpts from a letter by Vincent Van Gogh to his brother Theo, July, 1880.
"Well, even in these depths of misery I felt my energy revive & said to myself, I shall get over it somehow, I shall get to work again with my pencil, which I had cast aside in my deep dejection, & I shall draw again, & ever since I have had the feeling that everything has changed for me, & now i am in my stride & my pencil has become slightly more willing & seems to be getting more so by the day.  My over-long & over- intense misery had discouraged me so much hat i was unable to do anything."
"...I cannot tell you how happy I am that I have taken up drawing again.  I had been thinking about it for a long time, but always considered it impossible & beyond my abilities.  But now, though I continue to be conscious of my failings & of my depressing dependence on a great many things, now I have recovered my peace of mind & my energy increases by the day."
"At the same time I must tell you that I cannot remain very much longer in the little room where I live now.  It is very small indeed, and then there are the two beds as well, the children's & my own.  And now that I am working on Bargue's fairly large sheets I cannot tell you how difficult it is.  I don't want to upset these people's domestic arrangements."
- excerpts from a letter by Vincent Van Gogh to his brother Theo, Cuesmes, September 24, 1880., translated from the Dutch by Arnold Pomerans in The Letters of Vincent Van Gogh, New York, Penguin Books: 1996.

Vincent took his drawings to Brussels in 1880 where he showed them to his mentor, Reverend Peterson, who saw something in them that transcended Vincent's lack of formal training and so Vincent persevered.

Some of van Gogh's crises came from being in the wrong place at the wrong time. But there was a such a long lifetime of poverty, physical isolation, lack of social skills and poor health etc that we have to propose an endogenous depression that was not responsive to treatment.

Hels, I wouldn't venture a diagnosis but it's fair to say that van Gogh had a difficult life and a difficult personality. He was allergic to structured art studies although Theo encouraged him to give them a try but Vincent always found reasons to quit them in short order. We have Reverend Peterson to thank for his encouragement of Vincent's drawings at a time when Vincent was floundering.

Write down on the list of books to reread the letters from Vincent to Theo, that’s the effect of your post, Jane, thank you.