Hilma af Klint: "Everything Is Unity" 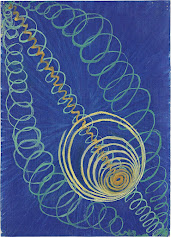 "I am an atom in the unversed that has infinities possibilities of development. These possibilities I want, gradually to reveal" - Hilma af Klint
For Hilma af Klint, a long-unrecognized pioneer of abstract art, abstraction was "a spiritual precursor of  aa utopian social harmony, a world of tomorrow.
Primordial Chaos (at left) is an example of Hilma af Klint's mystical geometry: blue represents the female principle, yellow the male, and green the unity of both in one.  The artist was a translator between realms. What we know of her thinking about her work does not conform to our notions of abstraction; she did not think the forms of the spirit were less material than the things of this world. The bonds that unite the above and the below of the world are reminiscent of the early years of the Earth, an inherent mystery in the geometry of forms that matter and energy take. Her use of space on the canvas puts me in mind of an early 16th century woodcut from Camille Falmmarion's book L'astronomie (1885). 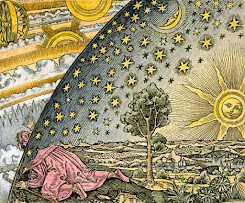 Hilma af Klint (1862-1944) lived a long life, more than long enough to know that her erasure from the history of modern art was...Contrary to popular belief, af Klint did attempt to show her work several times and sometimes succeeded, as in London in 1928. She continued to believe that her time would come in the future, probably after she was gone, much like Gustav Mahler whose symphonies were greeted unsympathetically.  "My time will come," he declared with absolute confidence.
At the age of twenty af Klint began studies at the Royal Academy of Stockholm, one of the first women to be admitted. There she became part of a spiritualist group of women known as "The Five" who met regularly for several years.
In her paintings, natural colors were replaced by colors used symbolically to embody her philosophical
interests, Christianity, Rosicrucianism, an Theosophy, the last being a bouillabaisse of Western occult beliefs and Hindu and Buddhist teachings.

It was one of her spiritual guides who gave af Klint the commission for ten large works in November of 1906,  a suite of paintings that became the exhilarating starburst of abstract art. Think of the modest dimensions of works by her well-known contemporaries: Kandinsky, Klee, Albers. At ten and a half feet high, af Klint's works tower over the viewer, exuberant, expansive, and utterly compelling.  Spheres, flowers inside circles, suggest the immanence of divine spirit.  She was convinced, and when we stand in theie presence we, too, are convinced,  that reality was not confined to the physical world.

She willed her works to her nephew who offered them to the Moderna Musset in Stockholm; the gift was declined.
Forty years after her death a selection of her paintings were included in the exhibition The Spiritual in Art: Abstract Painting 1890-1985 t the Los Angeles County Museum of  Art.
Images:
1. Hilma af Klint Primordial Chaos No. 16, 1906-07, on canvas.
2. unidentified artist - woodcut, early 16th century, Bettman Archive.
3, Hilma af Klint -  Numbers 117 & 118, 1916, colored pencil on paper
Posted by Jane Librizzi at 10:35 AM

I didn’t know this artist, thank you, Jane. Did you see the retrospective at the Guggenheim ?
https://www.beauxarts.com/expos/hilma-af-klint-prophetesse-de-labstraction/

Tania, how I wish I could have seen the exhibition in person. The revelation of Hilma af Klint's pictures means art history has to be rewritten. How many other artists who are not white men have we beeen deprived of?