Carl Moll: A Banquet In Vienna 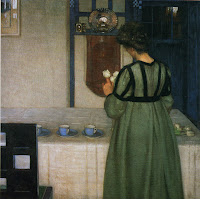 "Those who have attained the heights of civilized refinement in their daily life, even if they have otherwise little time for art, make certain demands on the things which satisfied them, upon their whole environment, demands which can be satisfied only with the art of art." - Ver Sacrum, 1900.


"I liked the atmosphere of the house, although its slightly oriental magnificence was less reminiscent of Schindler's time than of the age of Ingres and Delacroix...Japanese vases, great sprays of peacock feathers, Persian carpets on the walls."

To celebrate the New Year and the success of their association, on January 19, 1900  the Union of Austrian Artists, better known as the Vienna Secession, threw themselves a party. Who better to host the festivities than  Carl Moll (1861-1945), artist, dealer, and enthusiatic party-giver?  His new home, decorated with an extravagant orientalism that was anathema to Secessionist ideals, was conveniently located  at No. 6 Theresianumgasse, just off the Ringstrasse.  A duplex designed by architect Josef Hoffmann, it was also home to Koloman Moser, Moll's cofounder in the Secession.  The Hohe Warte, as the area was called,  was just in the process of becoming an art colony when the Molls moved there.

Thirty-six men and three women were invited.  It was that kind of group, Vienna was that kind of place, and Carl Moll was that kind of man in a world where women were objects of fascination and suspicion, women who seemed bent on exercising free agency, even without legal, social, or economic rights.  No wonder the gaiety often was laced with hysteria.
Moll had been a student of the artist Emil Schindler, living in Schindler's home and lusting after Schindler's wife.  When the master died in 1892, Moll promptly married the widow Anna and became stepfather to Alma Schindler (later Mahler, then Gropius, then Werfel).   Alma, whose childhood ambition was to "fill her garden with geniuses" was twenty in 1900.   Anna, the prudent mother, mindful of her own history, decreed that Alma and her younger step-sister Gretl remain upstairs during the party. 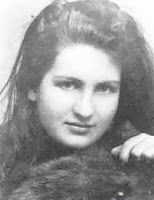 But Alma had already been flirting with the painter Klimt, who had no more scruples about seducing his friend's nubile daughter than he did about living in a highly irregular situation with his own sister-in-law. At a previous dinner at the Molls', Klimt had shown Alma how to make a heart shape with  her roll  and he then pierced it with a toothpick, like an arrow.  To make sure she got the point, he poured wine on it and declared it an excellent likeness of "my wounded heart."   Carl and Anna took their daughters on an extended tour of Italy but Klimt followed them from Genoa to Verona, escalating from kisses to outright propositions.  Only a direct appeal from Carl Moll stopped Klimt's pursuit.  Now the two would be under the same roof on the same evening. 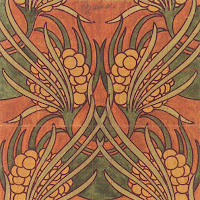 To set the stage for the evening, Kolo Moser designed  invitations and place cards, and Josef Hoffmann designed the silverware.  "When they first showed up at the Secession exhibitions, a tremor ran through the eating world.  People maintained it was quite impossible to eat with it, not eat properly, and certainly not in the 'English' manner!"  wrote critic Joseph August Lux.  Even so, the guests managed to spear the geometric-shaped dessert ices and scoop up the whipped cream and fruits stewed in liqueur.

Alma was allowed to help with the preparations and left us this diary entry: "We had girandoles and as a centerpiece, a fruit bowl surrounded with flowers - and garlands, with which they later decked me out.  On the table for the older guests, the centerpiece was Hellmer's water-nymph - also surrounded with flowers and garlands, and all the ladies had larges bouquets of violets.  Attached to each bouquet was a card inscribed with  a little poem, which was passed around and signed by each guest in turn."

A string quartet from the Vienna Philharmonic was hired to serenade the guests and provide music for dancing.  It was the final straw for Alma, who had studied piano and composition with the composer Alexander von Zemlinsky, another of her conquests.  The male guests easily located Alma, watching from an upstairs anteroom and the dancing began.  Kolo Moser introduced Alma to another Secessionist, Josef Maria Auchentaller, who said: "I say, she's pretty."  Moser (remember, he lived next door) eventually proposed marriage to Alma on several occasions, unsuccessfully. 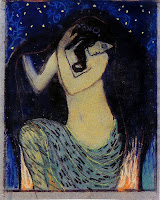 Exactly how the evening ended is unclear but we do know that when Moll discovered  Alma at the party, other revelers picked him up and carried him off.  Two men, identified as Franz Hohenberger and Maximillian Lenz, put lampshades on their heads and did a "mock-Japanese" dance. 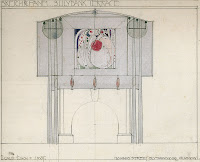 In an extension of this expansive mood, the Eighth Secession Exhibition planned for later in the year, would be organized around the theme "European Arts And Crafts."  Its invited guests Margaret Macdonald and Charles Rennie Mackintosh would make an impression with their descriptions of arts workshops, introducing the workshop idea that led to  a new secession when Klimt, Moser and others left to organize the Wiener Werkstatte in 1903.  But that is another story. As is the way that Carl Moll 's place in the Vienna Secession has been written out of most histories. (You may also be interested in The Absence of Carl Moll, published here September 21, 2009.). 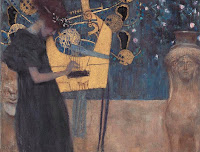 Founded in the spring of 1897 by a group of young artists, including Max Kurzweil and Josef Engelhart along with those already mentioned, the Secessionists were dissatisfied with the stodginess of the  establishment (a frequent complaint of the young). They  elected Gustav Klimt as their first president.

Taking note of the success of new  journals promoting the Jugendstil movement (Pan in Berlin - 1895, Jugend in Munich - 1896) the Secessionists published their own journal Ver Sacrum (Sacred Spring) in January of 1898.  Alfred Roller's cover for the first issue, with its tree bursting from the confines of its pot, foretold the group's expansion in every direction. What bound these disparate artists together was both theory (art should not be limited to creating illusion or verisimilitude) and practice (decorative objects are just as important as painting and sculpture). 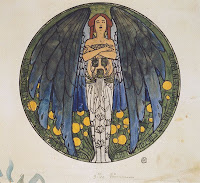 The first Secession exhibition opened on March 26, creating an immediate sensation.  And how could it not, when it introduced Vienna to the works of Fernand Khnopff and Constant Meunier (Belgium), Auguste Rodin and Puvis de Chavannes (France), Giovanni Segantini (Italy) and Whistler (United Stated)?  By the time their second exhibition debuted on November 12, it was held in their own Secession Hall designed by Josef Hoffmann.   The place eventually earned the nickname of  'The Golden Cabbage.' 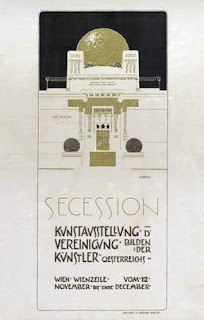 Posted by Jane Librizzi at 8:12 AM

I am besotted with this era, even if the lifestyles were sometimes badly behaved and somewhat chaotic. What adds to the excitement was that Carl Moll's new duplex was designed by Josef Hoffmann and neighbour of Koloman Moser. It is an art historian's wet dream :)

Hels, isn't it remarkable how great the influence on contemporary designers - and how little credit is given? I know you're on the other side of the world but, if you visit New York City, you must visit the Neue Galerie on 5th Avenue at 86th Street. www.neuegalerie.com. I didn't want to leave - and they have a Viennese restaurant staffed straight from Vienna. Linzer torte - mmmmm.

Alestedemadrid, from what I read in Alma Schindler's published diary it was little short of a bacchanale. I would love to have seene the Jugendstil-shaped ices. Perhaps they were chocolate and vaillia for the black and white sqaures.

Excellent post, Jane, with a very vivid and immediate sense of "how it was".

Norman Lebrecht, who has a new book "Why Mahler?" was here recently and talked a bit about Alma's family. Also, I recently received an email from someone in Vienna who wants to arrange an exhibition of Moll's work in New York. Maybe it's time.

Cheri, the book "Apples of Gold in Settings of Silver" describes several historical moments through famous meals. Another that you might enjoy is "Much Depends on Dinner" by Canadian Margarte Visser. She deconstructs an ordinary meal to reveal the history of agriculture.

Jane
I had, to a large extent, ignored Carl Moll before because of his later Nazi sympathies. But because the Vienna Exhibition is on in Melbourne just now, I thought I better pay him some proper attention.

There is a detailed, Vermeerian type quality to his quiet interiors. Many thanks.

Hels, when I first noticed Moll's work I couldn't understand why it was so little noted. Then I read about his life. I don't know what the 'statute of limitations' is for art in any given instance, but ultimately the work remains and, for that reason, wins out. We can't help wishing that exemplary works were created by exemplary people but art's reasons are not so simple. Carl Moll's life was interestingly bad, if I may put it that way, and so it's doubly odd that he has been so much erased from art history. I wish I could see that exhibition! Thanks, as always.

My brother recommended I might like this website. He was entirely right. This post actually made my day. You can not imagine simply how much time I had spent for this info! Thanks!
Little Tikes Giant Toy Chest Blue

Bicolas, thank you and also to your brother. Our times are very different but the art still speaks to us, I agree.

Right,Good to see these useful info here..Thanks a lot for sharing them with us….