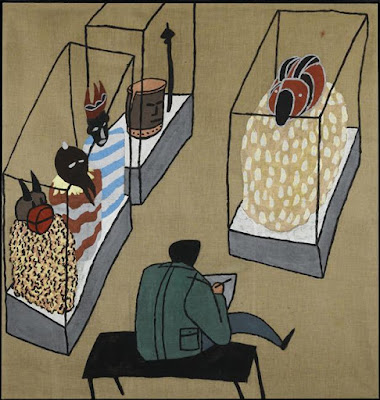 At the Museum of Modern Art you can sit in the lobby
on the foam-rubber couch; you can rest and smoke,
and view whatever the revolving doors express.
You don't have to go into the galleries at all.

In this arena the exhibits are free and have all
the surprises of art - besides something extra:
sensory restlessness, the play of alternation,
expectation in an incessant spray

thrown from heads, hands, the tendons of ankles.
The shifts and strollings of feet
engender compositions on the shining tiles,
and glide together and pose gambits,

gestures of design, that scatter, rearrange,
trickle into lines, and turn clicking through a wicket
into rooms where caged colors blotch the walls.
You don't have to go to the movies downstairs

to sit on red plush in the snow and fog
of old fashioned silence.  You can see the contemporary
Garbos and Chaplins go by right here.
And there's a mesmeric experimental film

pearly mauve - an accelerated sunset - a roiled
surf,or cloud curls undulating - their tubular ribbons
elongations of the coils of light itself
(engine of color) and motion (motor of form).
-  "At the Museum of Modern Art" by May Swenson from To Mix With Time, New York, Charles Scribner's Sons: 1963.

If everyone who works in the art world shares one belief, it is that nothing is more important than art itself.   Some really believe it, some merely pay lip service, but a correlative belief is that the social elements of the art world are irrelevant.  Never mind that Jean Stafford's famous short story "Children Are Bored on Sunday" which appeared in the New Yorker in 1948 is about  the "children," young single adults named Emma and Alfred.   Emma is at the Metropolitan Museum on a mission of self-improvement.  Emma grew up where children played hide-and-seek behind lilac bushes and now, having moved to New York, she realizes that urbanites like Alfred have an advantage "because they had grown up in apartments, where there was nothing else to do but educate themselves."   This  story of girl meets boy did not go well and now Alfred, the witness to her previous embarrassment, turns up and, what is more annoying, he is blocking her view of the very Botticelli painting she was hoping to study.

Stafford, perhaps sooner than most, intuited that contemporary art has become a substitute for religion. One possible explanation for the popularity of conceptual art and one made plausible by historical precedent: western art of the medieval period was a tool for teaching used by the Church.  Another theory that art has become mass entertainment as it has become monetized - and we are talking here about vast sums of money that bear no relation to the aesthetic or social value of the art work itself - is of more recent vintage.   Money, power, beauty - how to tease apart these sticky threads?

Poet May Swenson uses the language of aesthetic description applied to the exhibitions and events the Museum of Modern Art is known for to suggest that people watching is not only an event that brings visitors to the museum but can be viewed as an exhibition itself.   Those "strolling feet" making "gestures of design" have all the frisson of art plus something extra, a sense of performance with all its human contingencies.

Humor helps, too; the French certainly seem to think so.  Looking at  Francois Boisrond's Museum of Man we cannot see the face of the sketcher although we assume he is looking at the artworks assembled in the cases before him but the artist leaves us in no doubt that the creatures are looking at him, with what thoughts we are invited to imagine.   This notion is made explicit in David Prudhomme's delightful book Cruising the Louvre.   On one page we see a crowd surrounding the Mona Lisa as seen from the viewpoint of La Joconde herself.  In another panel, a group of museum visitors struggles to stay upright on a bench before Delacroix's Raft of the Medusa, making them appear physically  in synch with the struggling sailors in the painting.  Prudhomme's book is full of amusing and bemusing moments as museum-goers attempt to position themselves in relation to the art works.  As Prudhomme observes, "We try to hold onto what cannot belong to us" by which I take him to mean experiences.

Note on the artist: Francois Boisrond was born in 1959 in the western suburbs of Paris and was a student at the National School of Decorative Arts in Paris when he made Musee de l'Homme in 1980.  His mother Annette Wademant (1928-2017) was born in Brussels, Belgium and became the screenwriter of such well known films as The Earrings of Madame de (1953) and Lola Montez (1955).  His father was the Frenchman Michel Boisrond (1921-2002) whose debut film as a director was Naughty Girl (1955), a musical starring the young Brigitte Bardot.


For additional reading:
Cruising Through the Louvre by David Prodhomme, translated from the French by Joe Johnson, Paris, Louvre Editions: 2016.

Tania, an interesting poem and drawing, to be sure!