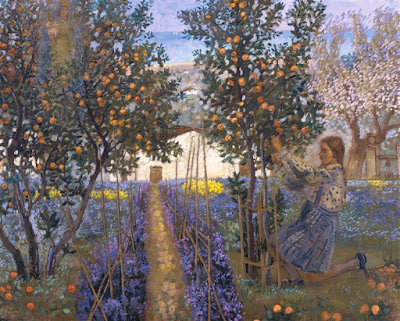 He was a prodigy, there was no doubt; certainly his father believed in him from the beginning.  He did poorly in school, being the kind of student that teachers described as being adrift with the clouds.  When one of his art teachers humiliated him in class, Michele Cascella stopped going to school entirely.  This caused a crisis in the family;  the boy's mother wanted him to make a religious vocation but the father, who supported the boy's artistic ambitions, won out.

As an adult, Michele Cascella (1892-1989) credited Vincent van Gogh and Raoul Dufy as his artistic influences and, while it makes a good parlor game to tease out the visual bits he took from each of them, no influence is sufficient to explain his skills in painting, drawing, lithography, and ceramics.   When I look at Orangerie, painted when Cascella was just eighteen, I see the lines used to describe the girl's skirt as coming straight out of Dufy, the lines and the colors working together but not in the usual academic way.  Cascella is fearless in using bright colors (his debt to Van Gogh) without ever letting them overwhelm this tranquil, workday scene.  The house in Abruzzo,  clad in stucco, is shown here in stark white, probably an indication of the midday sun.  The country house and the orange grove were often Cascella's subject but seldom more effectively than in Orangerie.  He usually depicts orchards as pure landscape, absent their human gardeners.   Here he shifts the focus to a young girl at work, staking and pruning, his subject, underlining the domestic element that makes a  landscape out of nature. Her pose appears, appropriately,  reverential in this Edenic setting.

Caseclla was born in  Ortona, a city on the Adriatic Sea,  in 1892.  His father Basilio, a polymath, was an engraver, ceramist, lithographer and illustrator, was the boy's first teacher.  Basilio's career was given a boost when he given  a plot of municipal land to build a laboratory and art studio for his lithography business.  Michele's first job at his father's business was the painstaking task of filling in backgrounds on lithographic stones.  But his father also gave him more traditional art projects such as copying  drawings of the old masters.  Unable to draw well himself from nature, Basilio sent Michele and his brother outdoors, supplied with a box of pastels, chocolate and cheese, to paint.  That Michele far outstripped his younger brother appears to have caused not too much rancor.
When Basilio judged that the boy was ready to exhibit in public, he arranged a show  in Milan for the fifteen year old (this was in 1902), followed by a show in Paris the next year where Michele sold his first painting.    At eighteen Michele Cascella was ready to take his place among the cultural set in the city.

In another prodigious move, the twenty year old artist began an affair with thirty-eight year old Sibilla Aleramo, one of Italy's most famous writers and already the author of the feminist classic A Woman (1906). (I read the novel in college but confess to only a vague memory of it at this point.)

Cascella's career would be long and varied, not a footnote to youthful achievement as are those of some who succeed early. He won a gold medal for painting at the 1937 Paris Exposition Universelle, where Raoul Dufy created a sensation with his multi-panel mural La fee electricitee.  Cascella made his first visit to the United States in 1959 and thereafter spent six month of each year at Palo Alto, California. In 1977 the City of Ortuna re- dedicated their art museum  to Cascella; more than five hundred works by three generations of the family are included in its collection.  When he died at age ninety-seven in Milan, he was buried in his hometown of Ortona.

Posted by Jane Librizzi at 10:14 AM No comments: 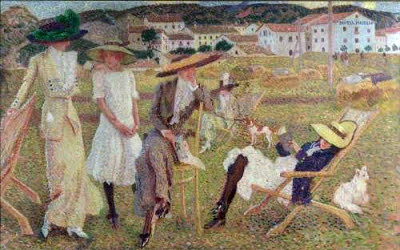 Poor Camillo Inoocenti (1871-1961).  Unlike some of his fellow painters, Innocenti gets no entry in the Grove Dictionary of Art, even in the wake of the ground-breaking 2008 exhibition Radical Light: Italy's Divisionist Painters, 1891-1910 at London's National Gallery.   One reason often given for the neglect of the Italian painters is their lack of group cohesion, sometimes also know as self-promotion.  Of course, some of the cohesion attributed to other  groups of artists has been applied from the outside by critics, the artists themselves being busy with more pressing concerns like where to apply the paint brush.

In The Cottagers Innocenti painted something he had seen frequently while growing up.  Before air-conditioning,  it was the custom among the bourgeoisie for the wives, children - and even pets - to decamp during the heat of the summer months in the cities to the countryside in search of  cool air  and relaxation. Still,  women and girls  were careful to shield their skin from the effects of the sun, hence the hats and stockings; relaxed though their postures may be as they lounge on lawn chairs, to our eyes they are dressed for company more than for  an intimate family tete-a-tete.  Innocente  was known for his  portrayals of women,  turning from the conventional female figure in elegant déshabillé, to more sensitive and nuanced images.  The Cottagers, an inter-generational gathering, is one of Innocenti's finest meditations on the stages of women's lives, captured in the doldrums between  the defining seasons of education and marriage.  An element of that fineness is how the artist managed to rise above his own rather conventional ideas about women with his brush: " ...woman is  mysterious,  fragile,  mutable,  impassioned and also artificial ."(translation by JL).

Like innumerable other aspiring artists, the young Innocentei was encouraged to pursue a less uncertain career.  His father thought the classics would be a more suitable field for the son of successful architect but,  at age twenty-four, Camillo realized that he preferred drawing while working as an assistant  to  the decorator of the Candelabra Gallery at the Vatican. Three years later he was admitted to the Rome Institute of Fine Arts.   Disappointed by his academic studies, he began searching for a fresher style.  In 1901 in Spain, he encountered the paintings of Goya and Velazquez,  but it was as much  popular scenes and landscapes that attracted him as the old masters.

Back home in 1903, Innocenti gravitated to the divisionist painters, their youth and their sense of liberty from the old academic rules.   Following World War I, he did set decoration in the up and coming Italian film industry on such projects as Cyrano de Bergerac and Ben Hur.  Had he not detoured to Cairo for a fifteen year stint as director of its School of Fine Arts (from 1925 to 1940), he might not have been so easily forgotten by his countrymen.  His work is the collection of   the National Gallery of Modern Art, and in several other Italian museums.