Snoopy Sees The Earth From Sunrise To Sunset 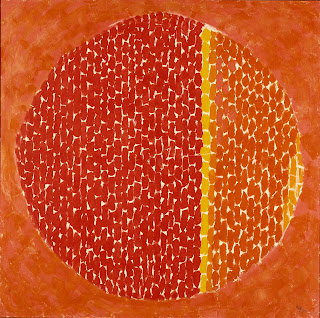 In Snoopy Sees The World Wrapped In Sunset  the world, in the shape and color of the sun, is surrounded by its own color.  The yellow stripes represent the color that we associate with the sun while the reds and oranges represent the heat that emanates from it. Like several other paintings from this time, Snoopy Sees The World Wrapped In Sunset shares some visual similarities with pointillism but not its enervated reliance on a color formula that 19th century European artists mistook for science.

Awed by the Apollo landing on the moon in 1969, Thomas conceived a series of "Space' paintings.  Her take on space also had a light-hearted side. "When Apollo was put into orbit, Peanuts' Charlie Brown left Snoopy spinning around to enjoy the unbelievable," she said in 1972. Snoopy got his own series of seven pictures. 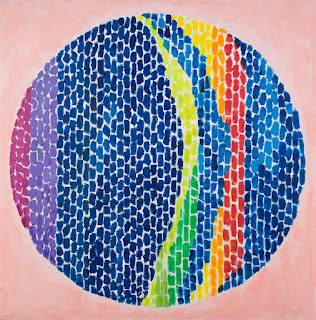 Then, in Snoopy Sees A Sunrise, the sun is shown in the cool colors -  blue, purple, and mauve,  - that characterize the Earth Shadow that appears above the pink anti-twilight, visible in the eastern sky at sunset. Stretching for nearly 180 degrees it curves, showing us the shadow we cannot see, an astronomical iteration of the parable of Plato's cave.

Alma Thomas (1891-1978) was African-American artist who began painting in a representational style but, under the influence of Lois Maillou Jones, her style became more abstract. Although she painted throughout her life, Thomas did n ot become a full-time artist until she was sixty-nine. At the age of eighty in 1972 Thomas became the first female African-American artist to receive a solo exhibition at the Whitney Museum. "Who would ever have dreamed that somebody like me would make it to the Whitney in New York?" Thomas said at the time.  But some activist groups accused the museum of tkenism, of using a few token black artists to camouflage a general lack of progress. Although she taught junior high school art for thirty-five years, Thomas was active in the local art scene and pushed back against discrimination wherever she encumbered it.

Something else to know about Thomas is that she liked to give fanciful and suggestive titles to her abstraction such as Winds Dancing With Spring Flowers and Breeze Rustling Through Fall Flowers.

Niki de Saint Phalle: An Artist For Our Time 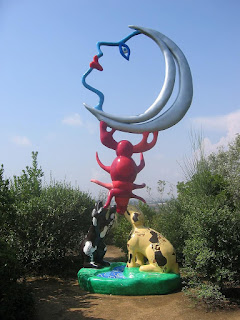 "If life is a game of cards, we are born without knowledge of the rules yet we must play our own hand." - Niki de Saint Phalle

I. Like the Guggenheim Musuem's Hilma af Klint exhibition in 2019, two exhibitions of works by Niki de Saint Phalle, one at MoMA PS1 and the other at the National Academy of Design, are revelatory, at least for Americans. The French-American Saint Phalle 's reputation has continued to grow since her  death in 2002.

The term Nana is French slang equivalent calling women  chicks.  The Nanas that Saint Phalle created are playful and  ambiguous at the same time. Voluptuous and triumphant, they embody the woman who conquers through her fertility, as opposed the aggressive and warlike behavior of men. Saint Phalle often said she liked to see men smaller than women, as portrayed by her sculpture The Blind Man and the Cow. Saint Phalle had been transfixed in horror by the Cuban Missile Crisis in 1962. The seeds of her fighting feminism had been planted in childhood. 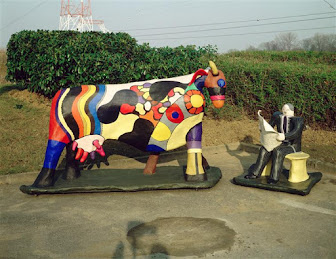 At first Saint Phalle's Nanas were interior pieces of a small scale but they grew bigger and more imposing as time went on. Saint Phalle intended them to command the public spaces they inhabited. This required a change from papier mache and wool to materials that could withstand the elements, so she began to work with hard resins.  When she placed three Nanas on a public square in Hannover, Germany in 1974, there was grumbling from the city fathers who felt encroached upon by the exuberant figures.

How the Tarot Garden came to be built in Garavicchio.  Members of the Agnelli family, wealthy  industrialists, donated land for the project, the site of an abandoned quarry, Saint Phalle hired local laborers to help her and work began in 1979.  The Tarot Garden would take up two decades of the artist's life. She did not want to be supported by a patron as her hero, Gaudi, had been by Eusebi Guell who got to have the Parc named for himself. Saint Phalle needed to raise millions to fund her garden so, to that end,  she developed and marketed an eponymous perfume in a flask she designed adorned with entwined serpents. 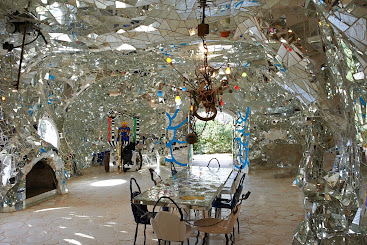 The Empress Nane was completed in 1983; Saint Phalle into its interior, a comfortable womb-like curivilinear space with no sharp corners.  Like all the figures in the Tarot Garden, this one was decorated with mosaic tiles in designs as artful as lacework and although Saint Phalle had been hostile to organized religion since childhood, the Tarot Garden  expressed her understanding of the spiritual aspect of life.

Weakened from decades of breathing the toxin dust of the fiberglass and polyester resins she had worked with, Niki de Saint Phalle died on May 21, 200 in La Jolla, California. 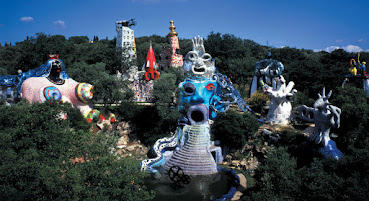 II. When Niki de Saint Phalle was born in Paris in 1930, her father Andre, was in New York  trying to salvage his family's bank and having affairs. A member of an aristocratic family whose lineage was traced back to the Crusades, Andre was married to an extremely religious American woman, Jeanne.Harper. She often told the little girl that she had cried all the way through her pregnancy. Jeanne had a cold temperament that warmed to violence directed at her five children. Mere months after Niki was born, her parents left her in the care of her grandparents while they moved to New York City. Living in a chateau, surrounded by servants and governesses, Niki felt abandoned and lonely. At the age of ten she was sent to a convent school;  the anger she felt at being  denied the education offered to her younger brother planted the seed of her feminism

Saint Phalle looked back her on eleventh year as the year of enfer (hell). First she was frightened by a snake and then her father began to abuse her sexually, "like a dirty old man in a cinema." As an adult, she would exorcise her demons through art. A legacy of her troubled childhood was the pairing of opposing forces, creation with destruction and joy with fear. "I've learned through my art to tame the things that scare me."

Saint Phalle married the writer Harry Mathews when she was eighteen. They had a daughter, Laura, and moved to Paris in 1952 but the next year Saint Phalle had a nervous breakdown. Hospitalized for six weeks she began to paint. Her discovery of Antoni Gaudi's  architecture in Barcelona captivated her and she soon began to incorporate shards of colored glass and china into her paintings.

Saint Phalle left her husband and two children in 1960 to devote herself to her work.  Searching for an outlet for her aggressions, the next year she hit on the novel idea of plastering bags of paint to canvas and then shooting them with a rifle. She described it as "murder with no victims." To Saint Phalle the choice was either art or terrorism.  Public demonstrations in four countries made her an international sensation of the avant-garde art world.  With that, the first artist of the 21st century was launched.

Niki de Saint Phalle: Structures For Life is on view at MoMA PS1 in New York City until September 6, 2021.