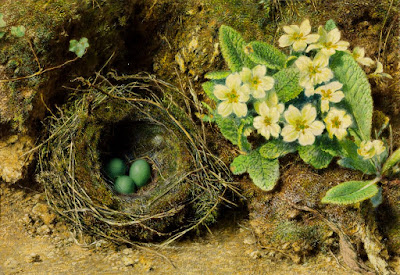 Primroses and Bird's Nest,  the flora and fauna of early spring.  I  had a close look at a bird's nest when a robin built one atop the air conditioner on my balcony a few years ago.  The south-facing balcony provided warmth and shelter from the wind and air conditioner stayed mute until the nest was vacated.

At first glance you could easily take Primroses and Bird's Nest for a photograph. But it is a watercolor painted by William Henry Hunt and it is a startling yet altogether typical example of his work.  The Englishman was known for the marvels of his technique in this notoriously tricky medium, combining transparent washes of color to tint the paper with opaque areas of gouache sitting on the paper like acrylics or oils, sometimes scraped to create texture, as you can see in the velvety primrose leaves.  And there is his unerring eye for color evident in those robin's eggs.
John Ruskin, arguably the most influential art critic in 19th century England, described William Henry Hunt as the finest still life painter the country had ever produced.  Hunt (1790-1864) lived a long and apparently uneventful life in London, only uneventful if you discount his paintings.