In the Pantry with Juan Sanchez Cotan 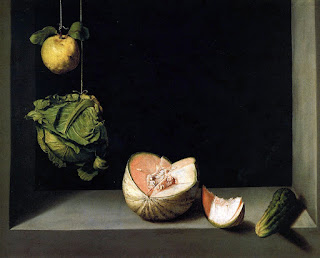 "They lie
under stars in a field.
They lie under rain in a field,
Under the sun.

An unexpected weight
the sign of their ripeness."
- "Green Striped Melons" by Jane Hirschfield


"There was a melon fresh from the garden/So ripe the knife slurped/As it cut it into slices." from "The Melon" by Charles Simic

Ah, melons.  One of the first fruits to be cultivated by domestic gardeners, loved for its juicy sweetness. Melon takes center stage in Juan Sanchez Cotan's  Quince, Cabbage, Melon, and Cucumber.  The melon and the wedge that has been cut from it do not make up a whole melon, implying a human presence as still life paintings often do. The practice of hanging the quince and cabbage was meant  to keep them from spoiling when refrigeration was not available. The cucumber placed over the edge of the sill is an enigmatic gesture or is perhaps intended to show Cotan's mastery of shadowing.  These pristine objects are the fruits of contemplation.

Typically, a still life inhabits low space to bring the viewer close to the objects.  A human presence is often implied but unseen. The gray frame in Cotan's painting is called a bodegon in Spanish, a pantry. The black rectangle behind is an abstraction, seemingly unrelated to the humble store room but perhaps symbolic of some preternatural vastness  of existence.

Still life as a genre has been around since antiquity but it has usually been regarded as one of the lowliest of art forms.  During Medieval and Renaissance times symbolic and religious meanings were attached to objects that appeared in paintings. With an abundance of materials goods available to a newly prosperous mercantile class in seventeenth century Holland, everyday objects began to seem interesting subjects in themselves. A paradox of still life: it can be suffused with meaning but not necessarily intended to convey a message.  Not every painting is like Van Eyck's Arnolfini Wedding.

Juan Sanchez Cotan (1560-1627) was a Spanish artist of the Baroque period (barroco or flawed pearl was a term borrowed from Portuguese). Cotan introduced realism into still life painting in his country, but  differently than the lavish materialism of his Dutch contemporaries. His austere style has been attributed to his years at a Carthusian monastery in Segovia. The Carthusians encouraged the practice of solitude and contemplation; we can see both qualities in Quince, Cabbage, Melon, and Cucumber. Norman Bryson suggested in Looking at the Overlooked: Four Essays on Still Life Painting that Cotan deliberately arranged them to reflect his  monastic life.  I see them as being suffused with a spiritual  equanimity.

Posted by Jane Librizzi at 5:37 PM

I recognize this painting, Jane, which was exhibited in Brussels as part of an exhibition on the Spanish still life. Very beautiful !

Tania, yes it it. The paintings of Juan Sanchez Cotan deserve to be better known.

Thank you for this link, Tania.