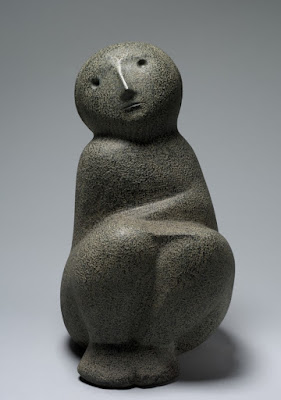 For a stone figure to emanate the humanity of breath  and consciousness is no small achievement; no wonder that statues have  long been subjects of veneration in places of worship.  Unlike the standing figures in medieval Christian cathedrals, modern sculptural figures are seldom didactic, although their meaning is enhanced by extended contemplation.  In the singular figure of Waiting Woman the American sculptor William McVey has  created a figure of outward withdrawal and inward attentiveness; this is a source of her attraction.

William Mozart McVey is one of those artists whose works are more familiar today than their maker.  McVey's most famous public public work is a statue of Winston Churchill (nine feet tall, bronze, 1966) that stands in front of the British Embassy in Washington, D.C.    He was born in Boston and educated in Cleveland but McVey found himself incompatible with his teacher so he practiced sculpting by carving tombstones for a local cemetery.

Thanks to a small grant,  McVey was able to study in Paris from 1929 to 1932, but he  needed the money he earned as a tour guide at the Louvre.  In Paris, McVey was more fortunate in his teachers, Charles Despiau and Marcel Gimond.  Both men had worked in the atelier of Auguste Rodin and Gimond had also studied with Aristide Maillol. Indirectly then, McVey gained access to  the two greatest living French sculptors of the day.   Where Rodin's figures were the epitome of naturalism, it would be Maillol's style that would influence younger sculptors.     McVey incorporated elements of Cubism and abstraction in  Waiting Woman; the resulting vocabulary made the full humanity of his subject visible. He creates a sense of intimacy for the viewer without intrusion on his subject,  a fine and subtle achievement.

Another example of McVey's work is The Good Samaritan from 1952, also located in Cleveland.