At Sea In A Red Desert 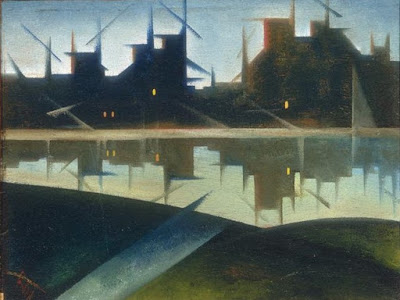 "In the desert you see, there is everything and nothing."
- Honore de Balzac, from A Passion In The Desert, (1830) translated from the French by Ernest Dowson.


What is it that makes Red Desert seem so of-this-moment when many of the finest films of the 1960s are time capsules, you could say, impressive historically, but delimited by time.  We can see now that a general level of self-awareness, reflected in mass entertainment, was a byproduct of postwar prosperity.  For Italy, a country that had known poverty for long, the boom when it came in the 1960s was  like leaping an entire century in one bound. The present was disorienting and the future unknowable. "There is something terrible about reality, but I don't know what it is. No one will tell me,"  a character named Giuliana  admits plaintively near the film's end. Sound familiar?


In 1964 when Michelangelo Antonioni filmed Red Desert he may have made the first feature film starring the environment.   In the U.S. Rachel Carson had published Silent Spring in September 1962 and the controversy sparked by its claims of chemical poisoning of the natural world were something new in the giddy world of post-war expansion.  An unspoken character in the film is the Po River, the longest river in Italy that rises in the Alps and windes its way across several provinces to empty in the Adriatic Sea.  One of the most complex rivers in Europe,  its sprawling delta makes the Po a barometer of the increasing sedimentation and rising waters that pollution has brought.

And why call it Red Desert?  For the chemical-swollen air that collapsed all distinctions between there and nowhere and, specifically, for the red sulfur particles that fell like rain, coating everything.

Antonioni, the son of a prosperous northern  family was nevertheless keenly aware of the region's poverty and the seemingly miracle of prosperity brought by the booming petrochemical industry in the decades following World War II.   The scale and futuristic look of the structures erected, conical furnaces and rows of red radio towers raised like the beaks of giant birds to the sky, inspired awe and uneasiness in those who watched the Po landscape altered almost beyond recognition.  All this would be included in the mis-en-scene for Antonioni's 1964 film Red Desert (Il Deserto Rosso).

By 1964, Antonioni and his partner the actor Monica Vitti had  completed a trio of much admired films titled retroactively "Alienation Trilogy." L'aventura (1960), La notte (1961), and L'eclisse (1962) had been filmed in black and white.  Red Desert, their first color film would be awarded the coveted Golden Lion Award at the Venice Film Festival in 1964. When asked why he had turned to color film after such great successes with black and white, Antonioni pointed out that black and white photography is not pure; it too alters reality.

What he realized was that he needed color to show the deadening effect of pollution on this historic landscape, one that had survived millennia of human settlement yet now seemed imperiled with mere years of industrialization.  Although Antonioni denied being influenced by particular painters, he employed painterly images and techniques throughout Red Desert.  To get the effects he had in mind, Antonioni had buildings, trees, and even grass painted.  The crew spent a long night spraying trees with gray paint to mimic the effects of air pollution.  Even the clouds of sulfur that give the film its title are muted by the thick air. Whenever a bright blue stripe appears on the screen, viewers are alerted that the scene will shift and to pay close attention.  The character Giuliana (played by Vitti) plans to opena gallery where she will sell ceramics, paints the  interior walls with blocks of soft, luminous color that looks like the work of a cheerful Mark Rothko.

In the opening shot factories are obscured by mist rising from the Po River or, so we assume, until the camera pulls back to reveal the steam clouds are belching from smokestacks.  Nearby, striking workers listen to a man shouting through a megaphone that conditions at the factory are so bad that the owner's wife would be ashamed to show her face.  Again the camera pulls back and we see the owner's wife Giuliana walking through this hellish landscape with her little boy Valerio. Prosperity has not brought an end to exploitation. 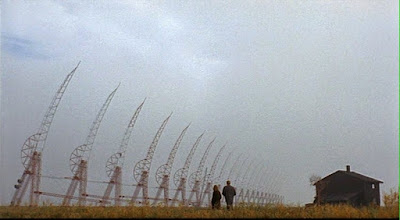 Giuliana is damaged like her surroundings, recovering from a near miss automobile accident but unable to connect with her old life, she wanders aimlessly.  For a time it seems that Zeller, a sensitive colleague of her husband may be able to help her but, in a manner reminiscent of Lawrence Selden in Edith Wharton's novel  The House of Mirth his offer of rescue is a mirage.

Red Desert ends with a mere whisper of hope when Valerio asks his mother if the birds know the poison spewing from the factory, she assures him that they must know by now.  An admission of puzzlement tinged with dread from Antonioni, a man enthralled by modern technologies. 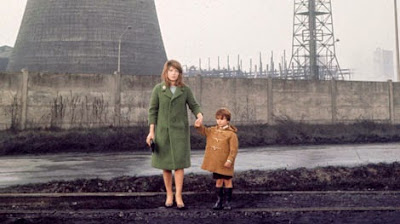 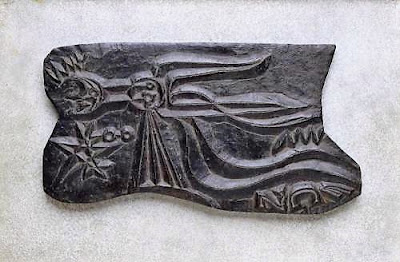 "The poem's tempo
failed to keep up,
despite a following wind:

with the young storks
flying across the sky
pure and effortless.

and could only attempt
to mimic their beat

But the sluggish pace
of the poem
stalled and stopped:

the lagging engine,
fingers beneath the wing -
the underside

tearing, with tearing,
the supple air
of the leaf - "
- "Fleeting thought" by Ana Luisa Amaral,  from What's In A Name translated from the Portuguese by Margaret Jull Costa, New York, New Directions: 2019.

"I have always been very much engaged and preoccupied by the material, because there is as much sensibility in the technique as in the rest of the picture." - Georges Braque

"Their flight is knowledge, space is their alienation." - St. John Perse, from "Birds"

Aeolus (Eole in French) was such a minor god in the Greek pantheon that it is unclear whether he had one guise or three.  The four winds were the children of Aeolus, keeper of the winds and Eos, the goddess of the dawn, daughter of Hyperion and Theia so, combined, they may have formed Aeolus.  In Greek the word denotes one who is nimble.  Aeolus, who guarded the four winds, lived on a rocky island off the coast of Sicily where he the four winds imprisoned in a cave.  He only loosed them when ordered to by a greater god.

Braque created his Eole as a sequence of forms: a triangular form is the neck, topped by a spherical head with a crescent (moon) for the god's face in profile at the end of an elongated neck. Hair flows out to the right, as though wind-blown.  Stars in the lower left hand corner also suggest that Aeolus is airborne.  Enclosed forms (triangle, crescent,etc.) surge to the left, creating streams of air in their wake.

Portuguese poet Ana Luisa Amaral is known for reinventing familiar stories in mythology and religion.  Lot's Wife wonders about her namelessness in a bible abounding in names; Amaral's  Ariadne would rather sit in a cafe on the island of Crete chatting with a dinosaur than spinning the thread that will allow Theseus to return to safety after slaying the Minotaur.

Ana Luisa Amaral was born in Lisbon in 1956.  Her first book of poetry  Minha Senhora de Que (Mistress of What) was published in 1990. She has published ten more volumes since and has been included in several anthologies of international poetry and translated into Spanish, Castilian, French, Dutch, Bulgarian, and Croatian.  What's In A Name translated by Margaret Jull Costa is her second collection to appear in English.  Amaral is herself a translator, having translated Emily Dickinson into Portuguese: she received her PhD. in literature on Dickinson's poems.

For further reading: What's In A Name by Ana Luisa Amaral, translated from the Portuguese by Margaret Jull Costa, New York, New Directions: 2019. 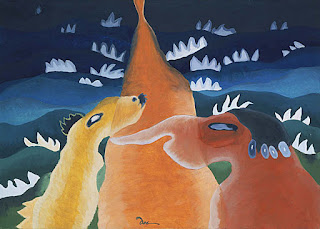 "I would become, say, Lake Michigan and she, Ontario.  Huron was scoffed at.  Any lake but Huron, she said.  As we threw it around a bit, I changed my answer.  Lake Michigan was clearly the wrong choice for me.  It's a bit too urban, I said, perhaps too likely a choice.

A little later she described our dialogue about Great Lakes as futile and a bit nauseating.  She became upset, knowing we'd probably never become Great Lakes.  She was right, but weeks later I did become a forest somewhere near Saginaw and she became a lovely washer-dryer combination."
"If Great Lakes" by Zachary Schomburg, from The Man Suit,  Boston, Black Ocean: 2007

A bad aura sometimes attaches to Surrealism: there are those who assert that the writers are incapable of making sense and the artists can't draw.  In general, surrealism works best when it suggests previously un-imagined connections.  Nonsense has a short shelf life for humans; we are designed to search for meaning.   Schomburg has been called  "a sincere surrealist" and praised by James Tate (1943-2015) who was himself a comic absurdist in verse with serious intent.

A doppelganger is the double of a living person, maybe a ghost, and in Zachary Schomberg's poems there are doubles in the most unlikely guises.  A girl dressed as a wedding cake meets her match in a man dressed as an avocado.

Just as Dante had his Beatrice and Petrarch had his Laura so Schomburg's man has Marlene - muse, sometime companion, and always oddly evasive, evasion being part of the charm of a muse for the sort of man who writes poetry.  There is even a poem "Far From Marlene" including with a character with a bird's nest in his hair that seems to have wandered in from a neighboring fairy tale.

From the first poem  "The Monster House" death is present, often as a non sequitur or an absurd joke.   The monster  tells jokes but wants to kill the audience - literally. When he refuses to reform he is replaced by a gorilla dressed as a man who plays a Wurlitzer organ. Schomburg hints subversively that strange things happen whenever one puts on a man suit.

"Black Telephone, White Telephone" is a sequence of poems charting the parallel adventures of two telephones; they may be commenting on each other's exploits or maybe not, but their juxtapositions are suggestive in unexpected ways.  Maybe ordinary life is mysterious after all.

In two poems, both titled "What I Found In The Forest," there are mythic surprises, hollowed trees and handsome woodsmen.

"I found a group
of inappropriately dressed
women inside

a hollowed-out tree.
They all had hidden agendas"

and again from the second poem:

"I found a group
of sharply dressed lumberjacks
hollowing-out

a large section of trees.
They were all singing Italian opera."

There is something new in Schomburg's surrealism, an acknowledgement of loneliness and a sense of history that looks back to "Abraham Lincoln's Death SCene" and forward to an emerging ecological consciousness.