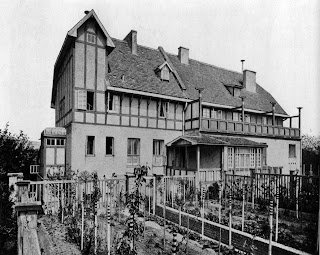 “His talent for surface decoration and every sort of  invention in the field of arts and crafts struck us as fabulous.” -  Josef Hoffmann

In photographs Koloman Moser can always be counted on to have a twinkle in his eye.  As his friend Hermann Bahr described Moser's disposition:“He is Viennese through and through.  His inventions seem to dance, to hover....Occasionally one perceives a gentle melancholy like the merest shadow of a cloud, but it's gone in an instant.” 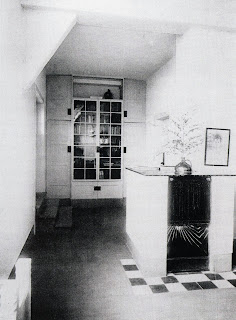 The other half of the Doppelhaus that Josef Hoffmann built for the painter Carl Moll became Koloman Moser's home.  Moser moved there with his widowed mother and sister in 1902.  Photos of the house on Steinfeldgasse show few furnishings but Moser himself designed the built-in cabinets and the rest of the furniture for their new home.  In 1901 Moser also designed a studio/residence for the painter Josef Engelhart (1864-1941), his future brother-in-law.  With his next-door neighbor Moll, Moser  traveled that year to Dresden and, again in 1906 the two traveled around Europe. In 1902 he designed a boudoir for his new next door neighbor, Marie Hennneberg.

Moser perfected his design conception  in the new Hohe Warte neighborhood; he imposed a diagonal layout inscribed on a square.  Built-in cabinetry, a necessity for a family with few pieces of furniture was thereby turned into a new and elegant design principle.  Moser also distributed his electric light fixtures around the ceiling in preference to the simple and obvious central overheard light.  The integrated treatment of the walls and furnishings created a clean geometric surface that could accommodate some curvilinear elements without becoming overly busy.

In 1900 Kolo Moser had  designed a 'reform' dress for Alma Schindler, stepdaughter of Carl Moll.  After Alma went to the Moser home in Vienna's working class Third District, she wrote in her diary for February 1, 1900, a passage that also reveals the leap that Moser was about to make in his life as well as in his art:
“Passing through a dingy entrance hall, we climbed the equally dingy stairs to the apartment.  On the doorbell we read: Theresia Moser, cartetaker's widow.
Shyly I rang the bell.  A woman in a threadbare cardigan opened it – she so resembled Moser that I instantly recognized her as his mother.  I asked after him – he wasn't at home.  A dowdy young girl appeared – his sister.  I could see behind her into the front room, which also served as the kitchen.  It was fairly sordid and, above all, dreadfully shabby.” 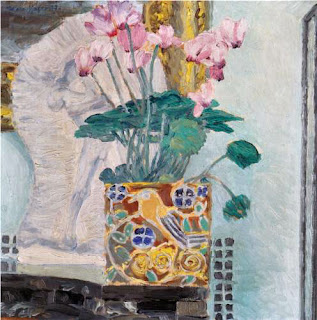 Moser's father Josef worked at the Theresianische Akademie, a preparatory school;  the family lived on the grounds.  Kolo, as he was nicknamed, had two sisters Leopoldine and Charlotte.  Josef Moser died unexpectedly in 1888, so the family had to move.  Koloman Moser earned his way through various art courses by giving drawing lessons.  It was while he was a student at the Wiener Kunstgewerbeschuel that Moser met Gustav Klimt in 1895.


It was his permanent appointment as  professor at the Wiener Kunstgewerbeschule (College of Arts & Crafts) in 1900 that finally gave the 32 year old Moser a measure of financial security.

At that time the average life expectancy in Austria was 44 years for men and 47 years for women so Moser was running short of time.if he wanted to marry and have his own family.  (As it turned out Moser, a heavy smoker, was diagnosed with cancer of the larynx in 1916 and died in 1918, barely fifty, leaving a widow and two sons, Karl (age 12) and Dieter (age 9) ).

Moser's painting of Cyclamen from 1907 shows a corner of the dressing room he designed for his bride, Ditha, in 1905.  Notice the rows of black squares outlining the built-in furniture against the white wall and the liberty Moser the painter took in shading it green  for this occasion.  Hermann Bahr was the one who nicknamed Moser the Tausenkunstler or 'Thousand-artist'.  You can see what he meant.