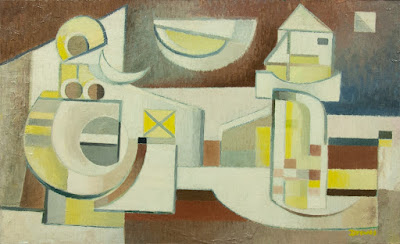 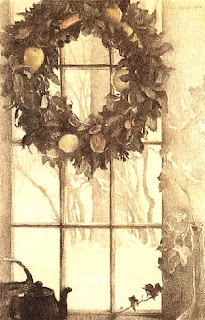 Like many Christmas carols, the origin of I Saw Three Ships is unclear.  What we do know is that it was included in the book Christmastide: Its History, Festivities, and Carols, gathered together by William Sandys in 1833.  Versions dating from the 17th century are mentioned as is the notion that the carol was composed and spread by minstrels wandering the English countryside during the Medieval times.

Lilian Westcott Hale (1881-1963) was a an accomplished and successful American artist whose work is often described as Impressionistic.  Since Hale often worked at home On Christmas Day in the Morning may be the view out the window of the Hale house in Dedham, Massachusetts.  Bare trees and snowy skies provide a background that renders the interior scene the more inviting.   The ivy trailing along the window frame and the wreath decorated with pears, apples, lemons and cinnamon sticks signal holiday warmth as does the kettle in the corner.  The realistic, even sober, rendering of the scene avoids greeting card sentimentality.

Grace Hartigan: Both Abstract and Expressive 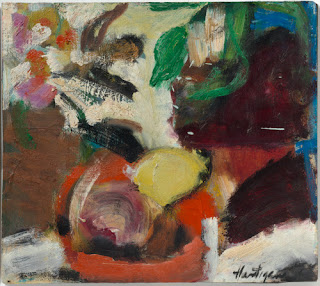 "I didn't choose painting.  It chose me." - Grace Hartigan

The Red Bowl is an exuberant gesture surrounded by fluid daubs of paint.  Are there flowers in the bowl? Hard to say for certain.  It is as though there are several different things insisting on their existence, demanding our attention.  Such colorful distortions were a hallmark of Grace Hartigan's work from the beginning.

Fascinated by Jackson Pollock's drip paintings, Grace Hartigan (1882-2008) was twenty-six when she showed up at Willem de Kooning's Fourth Avenue flat.  De Kooning had emigrated to New York City  from Rotterdam but Hartigan had escaped from Newark, just as surely an epic a journey as far as the she was concerned.  As a child, Hartigan had been fascinated by gypsies, sensing kindred spirits in their seemingly carefree existence.

Until she became an artist, Hartigan was unsure where to focus her abundant energies.  Unable to afford college, Hartigan married at nineteen but marriage could not contain her ambitions and after giving birth to a child, she realized that motherhood would not either.  When her son Jeff was seven years old she took him to live with her parents in New Jersey and went back to New  alone.  "If you look through history at people who are pioneers, they don't have a guilt chip. They're forced to have a guilt chip, and act like they have one, but they don't have one.  ..... I think Grace is one of those people who does what she needs to do."

Lacking formal art training, Grace devised her own curriculum; she spent the year 1952 painting her way through art history, doing freehand renditions of Rubens, Velaquez, and Goya.  To her friends and fellow painters Helen Frankenthaler and Joan Mitchell this was heresy; they thought Hartigan had lost her nerve.

During the early 1950s Hartigan sometimes exhibited under the name George Hartigan to avoid stereotypical reactions to a woman's work.  Her combination of beauty, talent, ambition, and rambunctiousness led to high visibility (including a feature story in Life magazine) and made her a model for other young women, notably the aspiring art historian Linda Nochlin.  Unlike Nochlin, Hartigan was always hesitant to identify herself as a feminist.  And she disputed other labels applied to - second generation Ab Ex-er and forerunner of Pop Art.  One influence Hartigan was happy to credit was the poetry written by her friend Frank O'Hara, the one who showed her that elements of both "high" and "low" art were compatible.  Clement Greenberg, the most influential art critic in postwar American art and Meyer Schapiro, an art historian, launched Hartigan's career in 1950 when they included her in their show "New Talent."

But Greenberg was incensed when Hartigan began to include realistic elements in her work, rebuking her for losing her way and decreeing that her wok was no longer modern(!).  Later he disparaged the idea that women could be great artists, even to her face.

Throughout a  career marked restlessness and experimentation, the one constant was Hartigan's conviction that making art is making magic.

Arthur B. Carles: A Neglected Modernist 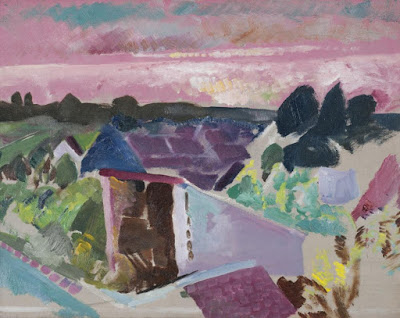 He has been called " one of the most brilliant colorists in the history of American art" by  art historian Barbara Ann Boese Wolanin.  So why do we not know more about Arthur B. Carles?

We have the enthusiasm of Philip Johnson, the architect who designed the Munson-Williams-Proctor Arts Institute, to thank for  the presence of these paintings in the museum collection. I was immediately drawn to these two paintings, hanging among the likes of  his friend Marsden Hartley and William Baziotes to name just two, on the walls of the Munson-Williams-Proctor Art Institute.
For those of us who live within reasonable driving distance to Utica, New York this type of revelation is a common occurrence.   The museum has a stellar collection of early 20th century American modernist art, thanks to a bequest from Edward Wales Root.  Root (1884-1956), who taught art at nearby Hamilton College, was a trustee of the Metropolitan Museum but when he offered his collection to them, they turned it down.  They were not interested in modern art; their loss was Utica's gain.

Paris Landscape demonstrates Carles' bold use of color - juxtaposing green and yellow, yellow and blue, blue and red - to create a luminous atmosphere.  In lesser hands the effect might have been jarring but Carles ingeniously used what he had learned from looking at Cezanne's structured blocks of color.

Carles (1882-1952) was a native of Philadelphia, a place whose Procrustean bed of an art scene he would escape as often as finances permitted.  The son of a watchmaker, he was able to attend the Pennsylvania Academy of Art on a scholarship.  His teachers, William Merritt Chase and Cecilia Beaux introduced him to French Impressionism but when  he was able visit Paris in 1907 it was Post-Impressionism with its riotous colors that won him over.

Carles took lessons from Matisse; he dismissed the man  as "bourgeois," but admired his work. The two  met again in 1931 when Matissse came to Philadelphia to paint a series of lunettes for the Alfred he met Mercedes de Cordoba, a. mezzo soprano and flamenco dancer from Spain.  The two wed in 1909 but spent little time together during their sixteen year marriage.  The couple had one child, a daughter, born in 1913; Mercedes Matter studied art in New York with Hans Hoffmann and became an abstract expressionist painter.

Through Steichen, Carles also met Alfred Stieglitz who invited Carles to show his work at his New York Gallery 291.  Carles also showed his work participated in the notorious Armory Show in 1913.  The public had never before seen American and European modernists together under one roof; the effect was shocking and the public was thrilled to be shocked. 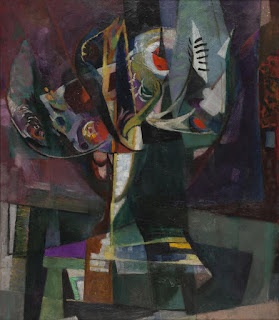 From 1917 to 1925 Carles taught at his alma mater but he was eventually dismissed for his refusal to follow its conservative academic curriculum.  Undeterred, Carles taught privately and never lacked for students.  For Carles, color was the bedrock of painting, a belief that had been reinforced by his wartime work supervising ship camouflage operations at the Philadelphia Navy Yard.   Derivation, painted between 1929 and 1933, suggests that losing his academic position freed him artistically. Those cubist flowers look the way they might to a bee - overwhelming beauty coming from every direction.

Carles suffered from bouts of depression and alcoholism which led to several hospitalizations during the 1930s as his health deteriorated.  In 1941 he had a fall that left him partially paralyzed and unable to paint.  Carles lived out his final years in a nursing home where he died in 1952.