Marcel Ayme: A Cold Day On The Rue Lamarck 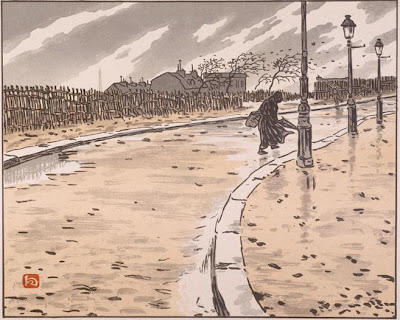 “Germaine Buge left Mademoiselle Larrisson’s apartment, where she had just finished two hours of housework, making the place ‘spick and span’ under the old spinster’s  critical eye.  It was four o’clock on a December afternoon and, for the last two days, the ground frozen hard.  Her coat offered poor protection against the cold.  The cloth was thin, of wool and cotton, but use had reduced it to hardly more than the impression of a covering.  Winter’s north wind drove through it as if through an iron grille.  Perhaps it even blew through Germaine who appeared to have litte more substance or reality than her coat.   She was a frail shadow,  her narrow little face drawn tight with worry;  one of those creatures for whom poverty and humility seem like Destiny’s charity handout, as if they survive only due to the tenuousness of the old life has on them.  Men never saw her in the street and women only rarely.  Shopkeepers did not remember her name and the people who employed her were almost alone in knowing who she was......Germaine hurried up along the rue Lamarck."  – from The Seven-League Boots by Marcel Ayme

“…if we only bother about things that are real, there won’t be much for us to do.”

Although those words come from the mouth of a character in a story The Seven-League Boots n by Marcel Ayme (1906-1967, they describe the author's recipe for writing.  Take ordinary people and present them with a fantastic situation.  Then watch what happens.  If this sounds cold, or like the recipe for science fiction or fantasy, it is not.  Ayme was attuned to his characters as though by a tuning fork, as this extended slice from the life of Germaine Buge demonstrates.  Metamorphosis has a lengthy history in French literature from Ionesco's Rhinosceros and  Anatole France's Penguin Island extending back to the medieval  times in such tales as Renard The Fox.  The Lais of Marie de France, written during the 12th century,  are full of incidents where the fantastic erupts in the midst of everyday life.
The premise of The Seven-League Boots is that simple, but magical. Two schoolboys, Germaine's son Antoine and  and his friend Friolat, see a pair of boots in a shop  window and they are enchanted.  In their literal interpretation, these boots will enable them to leap across buildings, to escape the poverty of suburban Paris and the dreariness of its monochrome landscape.  Although their schemes to acquire the boots from the eccentric owner come to nothing, Germaine manages to procure them for a pittance.  When the careworn woman gives the boots to her son, “it seemed to him that the sad new wallpaper had turned the pretty apple-green of spring.”


You could say that Ayme's technique is deceptively simple, but he is engaged not in deception but rather in exploring the possibilities inherent in seemingly simple ideas.
"On the Rue de l’Abreuvoir in Montmartre there lived a young woman named Sabine who had the gift of ubiquity. She could, at will, multiply herself and exist simultaneously, in both body and mind, in as many places as she pleased."
So begins Les Sabines (The Sabine Women), wherein a character named Sabine has the ability to duplicate herself at will.   Her husband Antoine the pastor, a man singularly lacking in imagination, “firmly believed that, like every husband, he possessed an indivisible wife.”   Regardless of the time he arrived  home only to be confronted by three Sabines in the parlor.   When Sabine meets an attractive young man named Theorem in the  street, the encounter transforms her life – but which one?  If this synopsis sounds like a comedy of errors, it is typical of Ayme's work that it becomes much more, following its own premise to the character's diminished end.

Ayme belonged to the generation that produced Sartre, Celine, Malraux, and Raymond Queneau, all writers better known today than he.  His stories are set in an indeterminate times that owes much to the years of the writer's youth.  Henri Riviere's lithograph of the rue Lamarck seems to exist in that same unspecified moment.

Posted by Jane Librizzi at 1:26 PM