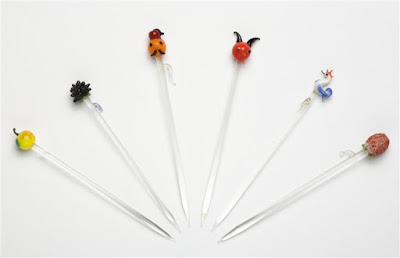 Stir up some fun, and economically, too, for the New Year.  In the frugal spirit of old Cape Cod living, the local red berry overwhelms any pretensions the vodka may have, so go for the cheap stuff.  The red  color is reliably deep and gorgeous.  Cocktail mixing doesn't get any easier than the Cape Codder.  I was introduced to the non-alcoholic version as a little girl living in Newburyport, Massachusetts.  Trying to pick out which stirrer would make the drink taste better is the kind of decision that can occupy a child for quite some time.  These stirrers, appropriately for a New Year's celebration, came with a glass holder in the shape of a stork.


The basic Cape Codder recipe is as follows:
2 ounces vodka
3 ounces cranberry juice
1/4 lime perched on the rim of the glass, to be squeezed
club soda to taste 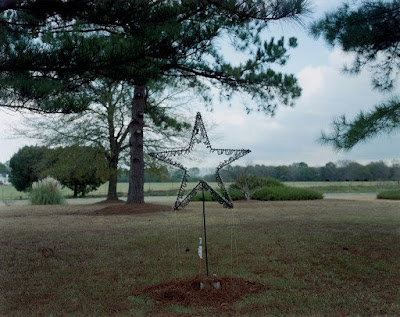 A star for the new millennium and a landscape cut out by a star, this photograph was taken on New Year's Day in the year 2000.
While the world was preoccupied with the deaths of other, more famous artists, William Christenberry slipped quietly away on November 28, 2016.   Christenberry was, by turns, a painter, a sculptor of miniature 'dream buildings, and a photographer,  and it is for his photography that he will be remembered.  What attracted him to photography, he said,  was a spiritual dimension that enabled him "to come to grips with my feelings about the landscape and what was in it."  Through his lens,  worn clapboards and dilapidated buildings  appeared more perfectly themselves in rich color than they had in  black and white.  Christenberry, raised under the southern sun, had no prejudice against the use of color film. That landscape also included the Ku Klux Klan and a hooded man at the Tuscaloosa County Court House in 1960, an encounter that shook Christenberry deeply.
William Christenberry was born in Tuscaloosa, Alabama in 1936, the year that Walker Evans and James Agee spent a month with tenant farmers in nearby Hale County.  The two men hoped to publish an article but it failed to materialize;  instead, their book Let Us Now Praise Famous Men, published five years later, became a masterpiece of social documentary.
Alabama was home to some of the poorest areas in the south  and it signifies that Christenberry acquired his first camera as a joint Christmas present with his sister in 1944.  After attending college, Christenberry thought he would become a painter but in New York he met Walker Evans who encouraged him to take his photography seriously.   Christenberry taught painting at the Corcoran School of Art in Washington, D.C.,  where he lived until his death from Alzheimer's disease last month.

"I love this. You will love this." A Joseph Cornell Christmas Card 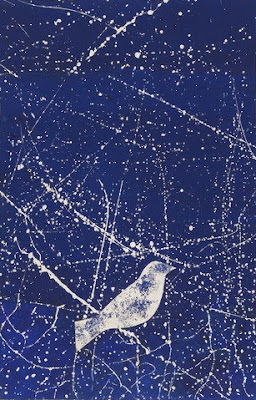 "We all live in his enchanted forest." - John Ashbery, American poet, writing about Joseph Cornell.

An unidentified person wrote "I love this.  You will love this." in the margin of a poster showing a Joseph Cornell shadow box.  A brilliant artist who created most of his work as gifts for friends or simply as offerings to people he admired, Joseph Cornell was the embodiment of that sentiment.

Joseph Cornell was born on Christmas Eve in 1903.  Although Cornell led a humdrum, even constrained life, and rarely traveled, he was fortunate to live in New York City, a place where ordinary life offers intimations of magic around any corner.    He described the small objects he collected and used to compose his shadow boxes as "exquisite surprises."   These jewel-like boxes are now treasures to the museums lucky enough to have them and once you have seen one  you will seek them out wherever you go.

The shadow box itself has theatrical ancestors, from the wunderkammer (chamber of wonders) of  Renaissance courts and street fairs to the penny arcades that Cornell himself saw at amusement parks as a child.  In Cornell's imagination the idea of a miniature world as entertainment is deepened by memories and personal associations that mesmerize viewers.   So many of his boxes contain pictures of birds that critics have liked to speculate on their symbolism: caged bird of free spirit?  The caged bird appeals to those who concentrate on the artist's loneliness and  shyness with women but Cornell's birds seem to me closer in spirit to the poet Shelley's skylark, who can teach him "half the gladness" it knows.

Some have wanted to claim Cornell's art for surrealism but the artist said not, and I am inclined to agree.  The Surrealist impulse to mix up dreams and reality was often aimed at unnerving the viewer with a pile-up of illogical elements; Cornell was a romantic, bent on revealing magic in our surroundings.  White magic, he said. 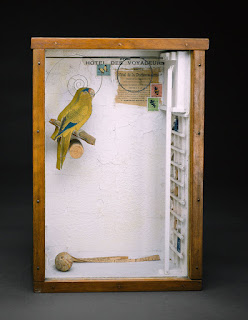 A Burro, A Donkey 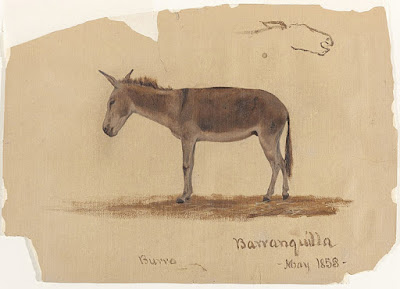 Burro is the Spanish word for donkey and when the American artist Frederic Edwin Church visited Colombia in 1853, he named this watercolor of a donkey, Burro.   The little animals have been domestic servants and, for children, special domestic companions.  When I was a child I was  often taken aback by the vigor and unpredictability of dogs but had no hesitation in stroking a burro or feeding it a carrot.  And burros come to mind at this time of year, their gentleness and dignity a remembered element of the Christmas story.  Among  world religions, Christianity gives  the donkey a special place; it was on a donkey that Jesus entered Jerusalem, (in  Robert Bresson's 1966 film Au Hasard Balthasar the relationship between the young girl Marie and the donkey Balthasar is a parable of the Christ story, from birth to death..)
My first encounter with a donkey in literature was Dapple, the donkey in Cervantes' Don Quixote.  Dapple is a loyal, peaceful, humble companion to humans who admire their virtues, even as they fail to emulate these in themselves.  Dapple's owner, Sancho Panza, loves the animal dearly, a love that Cervantes must have shared because Dapple is the most memorable character in the book after Sancho and Don Quixote, in spite of having a non-speaking part.   At a time when we think of animal farming in terms of food stuffs, it is good to remember that donkeys were among the most common domestic animals, and not only in Spain in the 16th century.


Back to Church and his burro now.   The career of Frederic Edwin Church (1900-1826) fits our contemporary concerns about the  relationship  between aesthetics and money somewhat uneasily.    Church's interest in traveling to the tropics came from his reading of the naturalist Alexander von Homboldt, whose descriptions of 'exotic' landscapes contained the explicit call for artists to come paint "the living image of manifold  beauty and grandeur in (its) humid mountain valleys..."   The English aesthete John Ruskin had also called for art to join in "the teaching of nature" in a heroic way.   Church's most famous painting Heart of the Andes (1859) did just that.  It was commissioned by  wealthy businessman Cyrus Field,  a founder of the Atlantic Telegraph Company which laid the first undersea cable.   Field,  a man with a financial interest in stimulating public appetite for faraway places was well-matched with the equally ambitious Church.
From its first exhibition in New York City, Heart of the Andes caused a popular sensation  as people waited in line for hours to pay admission for the chance to view a giant (five feet high by ten feet wide) landscape that was largely imaginary although constructed from realistic bits of South American scenery.  Church was a wealthy man himself but he had few qualms about making more money or its effects on his work.  I just happen to find more charm in his realistic drawing of this little burro, made on his first trip to South America.

To read my translation of Jacques Prevert's poem "The Little Donkey" go here. 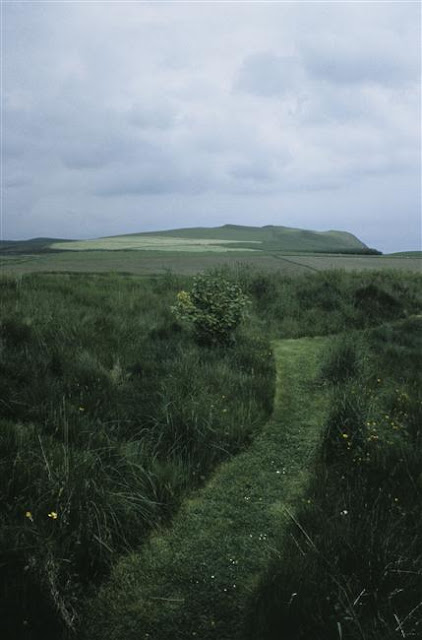 "Their being finely aware - as Hamlet and Lear, say, are finely aware - makes absolutely the intensity of their adventure, gives the maximum of sense to what befalls them.  We care, our curiosity and sympathy care, comparatively little for the stupid, the coarse, and the blind;care for it, and for the effects of it, at the most as helping  to precipitate what happens to the more deeply wondering, to the really sentient." -  Henry James, excerpt from the Preface to the 1908 edition  of The Princess Casamassima.

"Do you know so much  that you call the slave or the dullfaced
ignorant?
Do you suppose you have a right to a good sight.... and he or
she has no right to a sight?
Do you think matter has cohered together  from its diffused
float, and the soil is on the surface and water runs and veg-
etation sprouts from you...and not for him and her?" - Walt Whitman, excerpt from Leaves Of Grass, 1892.

I. - If ever two writers were meant for the scholastic exercise of "compare and contrast" it would be these two:  Henry James (1843-1916) the aesthete and Walt Whitman (1819-1892) the free spirit.  But that is not why I put them together here.   Rather,  their  views of the relationship between aesthetics and moral worth seem designed for our current moment.
Whitman's poetry was as distinctive as that of his contemporary Emily Dickinson; where Dickinson's poems arrived as briefings from an alternative reality, Whitman's embodied his  experiences in an expansive, generous, and  democratic epics, as in Leaves Of Grass.  Although  admired by the Transcendentalists on its initial publication, Leaves of Grass was more typically derided as "trashy, profane, & obscene."    In our time, Lawrence Ferlinghetti (b.1919) and Adrienne Rich (1929-2012), descendants of Whitman, also write themselves into the larger social narrative.  Their poetry is personal but not solipsistic.

II. - Another sort of embodied or concrete poetry can be found in Scotland.  There is a garden where Whitman-esque 'garden poems' are carved, one word at a time into stones, a plentiful substance in the rocky Alban soil.  Little Sparta, as the garden is now known, was the brainchild of Sue Finlay and Ian Hamilton-Finlay, artist and poet living near Edinburgh.  The original garden,  accurately named  Stonypath, was planted in 1966 and has been elaborated on several times since. These lines from "Integrity" by Adrienne Rich would be a fine candidate for a walking poem.  For Whitman, like Rich, patience would have to be an active virtue.