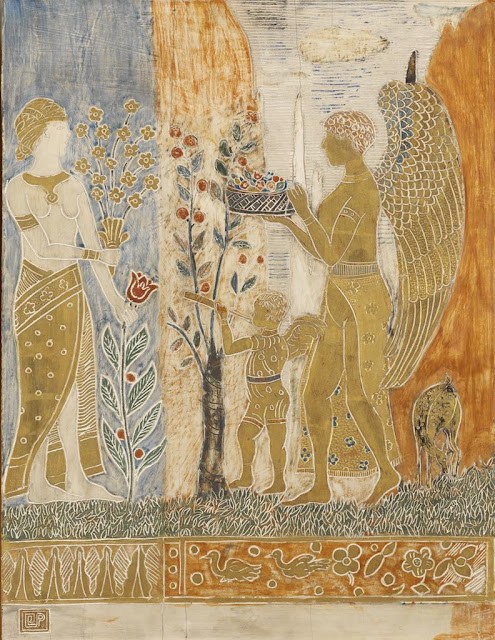 "Under the bright glazes
Esau watches Jacob,
Cain watches Abel.
With the same heavy eyes
the tilemaker's Arab assistant
watches me,
all of us wondering
why for every pair
there is just one
blessing."
- excerpt from "At the Armenian Tile Shop" from Mosaic by Linda Pastan, from PM.AM: New & Selected Poems, W.W. Norton: 1998


The subject of The Offering by Charles Prendergast was inspired by artistic depictions of the Annunciation. In this re-imagining a female angel with elaborate medievalized wings and an elegant Renaissance left-facing profile,  offers a basket containing flowers and fruits to a woman.  The woman's dress might be stylistically linked to Greece or Egypt, her hairstyle is similar to that seen on statues of  Roman goddesses.  She  holds a basket of daisies in her right hand and grasps an impossibly long tulip in her left; she is participating in an exchange of grace.  A Byzantine mosaic of a tree grows between the two women, perhaps the tree of life.

A Raphael-esque putti plays a pipe; the chubby line of his cheek always makes me smile when I look at it.  At lower right a fawn nibbles grass.  Against an abstract background a single cloud floats by. Charles Prendergast has used the Roman  technique of atmospheric perspective, by which light colors were brought forward. And it contains these many of art historical references harmoniously.

For the ancient Greeks, offerings were reciprocal exchanges of grace, made spontaneously and bountifully. And they are still an important feature of modern Greek religion. The Offering was an homage to old wall paintings made around 1915, three years after Prendergast made his first gesso panel. He lived at a time when old worlds were being rediscovered, the arts of Greece and Rome and the Great Pyramid at Giza, for instance. The Civilization of the Renaissance in Italy by Swiss art historian Jacob Burckhardt had been translated into English in 1860 and the British classicist Jane Ellen Harrison published Prolegomena to the Study of Greek Religion in 1903.

Cennino d'Andrea Cennini (circa 1360 - before 1427) was an Italian painter remembered today for his book Il libro dell arte written around the turn of the 15th century and sometimes translated as The Craftman's Handbook.  The book was a how-to manual for the use of materials and techniques in Renaissance painting from pigments and brushes applied panel and fresco. Prendergast owned a copy.


Prendergast relished the demands of this painstaking medium, taking pleasure in all aspects of producing works of delicate perfection. For panels, he used sugar pine or old white pine.  He transferred the cartoon to its surface with charcoal, repeatedly going over the lines, incising them with gouges and chisels. Meticulously, he created springy, rhythmic patterns. Over this he spread several coats of gesso plaster and while it was still wet, tracing more delicate lines with a steel point.  A last coat of plaster was applied and, when thoroughly dry, sanded down with pumice and sandpaper.  Only then would gold and silver gilt and color be applied with an adhesive.

Persian miniatures, Egyptian frescoes, antique Greek painted vases, Coptic textiles, Byzantine mosaics. - all were incorporated by Prendergast in his panels, seemingly effortlessly yet the product of intense concentration.   The scale and at-the-front-of-the-plane placement is reminiscent of 14th century Italian panel and fresco. His toned reflective use of gold leaf combined the clarity of Persian painting with the muted quality of Italian frescoes.

Charles Prendergast (1863-1948) was born in St. John's Newfoundland, the younger brother of the painter Maurice Prendergast. When Charles was five the Prendergast family moved to Boston. In the 1880s Charles worked briefly selling household items door-to-door.  He then turned to custom woodworking which he found profitable but unsatisfying.  Irresolute, he turned to making frames for paintings and this led to a career in art in 1895.

With Maurice he embarked on joint study in the museums and churches of Florence, Pisa, Siena, Orvietto, and Ravenna; Venice was his special favorite. Charles was smitten by the beauty of antique  Italian wall panels. Nevertheless, it was not until 1912, at forty-nine, that Charles made his first gesso panel.

Almost immediately, Charles Prendergast attracted a small but important group of collectors including Lillie Bliss, a founder of the Museum of Modern Art. Another was Dr. Albert C. Barnes of Merion, Pennsylvania, then in the process of amassing the largest collection of Post Impressionist work in North America, who purchased four panels and a sculpture for his collection. Barres, who also had a great admiration for metalwork,  commissioned Prendergast to make gilt frames for many  other pictures, so the influence of Charles Prendergast is visible throughout the Barnes Collection.  After the death of Maurice Prendergast in 1925, Charles married a Frenchwoman, Eugenie van Kemmel. Charles Prenderrgast died in 1948 at Westport, Connecticut.

Posted by Jane Librizzi at 8:25 AM

]ania, that is good news. I read French netter than I can write it these days.
But I haven't looked much at my language translation button. I should look at it more often. Thanks for letting me know.