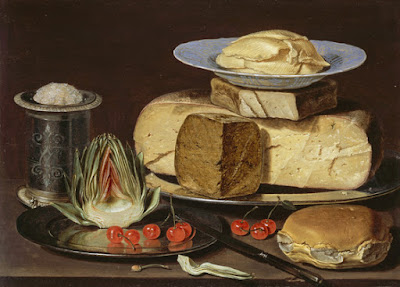 "Someone arranged them in 1620.
Someone found the rare lemon and paid
a lot and neighbored it next
to the plain pear, the plain
apple of the lost garden, the glass of wine, set down
mid-sip -
don't drink it, someone said, it''s for
the painting."
- excerpt from "Still Life" by Marianne Boruch


The voice that speaks in Marianne Boruch's poem was not around when Clara Peeters painted Still Life with Cheeses, Artichoke and Cherries (circa 1825?). Someone unseen had already left marks on the artist's subjects.  The perpetrator's knife is positioned at the center front of the picture, its effects on the butter, cheese, bread, and artichoke visible. Peeters  made a veritable tower of local produce, artfully displayed (butter perched atop a blue plate) and richly articulated (shaved fragments of a cheese wheel). Butter and cheese, emblems of Dutch pride in their dairy farms were by-products of milk, known as "the noble liquid"

But there is another arrangement, anchored by the pewter charger, painted with a high glaze.  The cherries are reflected and, in turn, reflect the unseen light source to the left on the canvas.   My eye was drawn immediately to the exquisite realism of the artichoke section.  The stem of a cherry may be a nod to the vanitas (from the Latin vanus for emptiness), a type of painting that portrayed of the transience of life and the emptiness of pleasure

Still life as a stand-alone genre emerged during the early decades of the seventeenth century  when increasing prosperity brought a new abundance to ordinary people. Ontbijtjes or "breakfast pieces," pictures that showed the ingredients of a simple meal were very popular. Clara Peeters, one of the few female painters of the time, is credited as a founder of the genre. Her distinction is not owed to the genre itself but to her meticulous brushwork and elegant arrangements.  There were fewer than a half dozen Dutch paintings of food that have been identified from the years before Peeters painted her first known work

About the life of Clara Peeters (1594? - 1657?) we have very little information. She lived in Antwerp and may also have lived in Amsterdam and The Hague. Her earliest works have been dated to 1607 and 1608. It is not known who taught Peeters but speculation has come to rest on Osian Beert (circa 1580-1623) of Antwerp as Peeters' teacher; certainly there are similarities in their style for a genre that was just taking shape.  Objects are arrayed on a table that extends beyond both edges of the canvas; beyond is only inarticulate darkness.  Her earliest works have been dated to 1607 and 1608.  Although Peeters worked mostly with still life, in a painting dated about 1610 she included a figure that is assumed to be a self-portrait, holding a pen in one hand and a timepiece in the other.  The arrangements of objects could to be interpreted symbolically as a vanitas. (from the Latin vanus for emptiness),  an expression of the transience of life and the emptiness of pleasure

We know more about her compatriot Judith Leyster (1609-1660) who was  much admired by her contemporaries but who, like Peeters, faded from memory after her death; many of Leyster's works were attributed to Frans Hals because it was thought that they were too good to be the work of a woman.

Image:
Clara Peeters - Still Life with Cheeses, Artichoke and Cherries, circa 1625 ?, oil on board, Los Angeles County Museum of Art.
Posted by Jane Librizzi at 5:36 PM

There was an exhibition at the Prado of Peeter's works a few years ago. I didn't see it, but you might like to get hold of the catalogue. The Chief Curator of Flemish and Northern School Painting at the Museo del Prado also wrote the two essays called Reflections on the art and culture of Clara Peeters.

Some of her works were simple and missing colour, but some were stunning.

Hels, thank you for that information, and not just for myself.
Peeters was