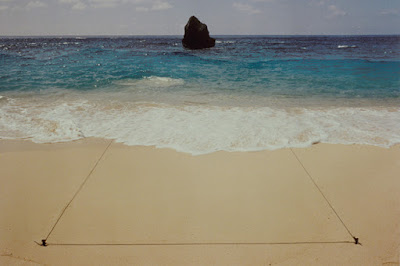 "I want to make photographs whose very ambiguity provokes thought, rather than cuts it off prematurely.  I want to make that work on a more mysterious level, that approach the truth by a more circuitous route." - John Pfahl

Pfahl's photographs combine the conceptual with ordinary perception in provocative ways, using string or yarn, aluminum foil, colored tape, or Styrofoam balls. Layers of suggestion unfold like an onion.  Triangle - Bermuda plays on our notion of the Bermuda Triangle as a negative space where things disappear; Pfahl makes it visible without answering the question - what is it?  "Altered States" in 1975 was Pfahl's first major series.  He was  preternaturally aware of human interventions on the natural world; in this his work is similar to landscape architect John Brinkerhoff Jackson. So, among  series of waterfalls and rivers is one on power stations.

John Pfahl parodied the work of an older generation of nature photographers for their unearned reverence, especially Ansel Adams who misrepresnted roadside vistas for wilderness and whose use of red filters falsified the land, in Pfahl.s view.  Pfahl's deadpan sensibility was also apparent in his 1992 series "From the Very Rich Hours of a Compost Pile."  Ravishing color and rigorous composition are not things normally perceived in heaps of peelings, pods, and discarded produce leaves. The critic Richard Huntington wrote, "John Pfahl could make even a heap of garbage look beautiful."

"Ansel Adams had his beloved Sierras. I seek out the more elusive mountains on the lake plain near my home in Buffalo, New York." - John Pfahl

Soon after he was given his first (Brownie) camera at eight years old, John appropriated his mother's 35mm camera. At age nine he had found his vocation.  Pfahl has left his mark across his native state. Born in New York City, Pfahl was  educated at the Syracuse University School of Art, taught at the Rochester Institute of Technology and at the University at Buffalo where he lived for forty years.

And about that triangle. Punto di fuga is the Italian term for the vanishing point, literally the fugitive point, the point of escape, usually located near the center of the horizon in an image. Perspective itself comes from the Latin perspicere 'to see through.' Linear perspective was one feature of Renaissance art  developed by architects Filippo Brunelleschi and Leon Batista Alberti. Simply put, it was a system to create the illusion of space and distance on a flat surface using geometry.

The lesson I find  in John Pfahl's photography and in any good photograph is that  I come away better able to see with my own eyes.

Interesting, this tribute to a photographer I didn’t know.