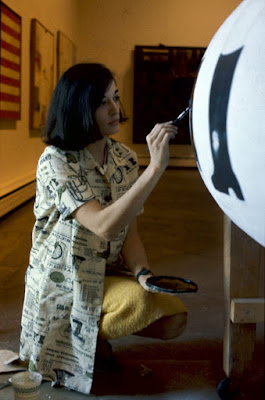 When the current Whitney Biennial opened on March 17 in Manhattan after three years of preparation, its theme  "(the) creation of the self" seemed  hermetic and out of touch, especially coming from people who think of themselves and their preoccupations as driving the culture.   This moment, as it turns out, calls for engagement with the world.
A month before, the Canadian writer Margaret Atwood had asked  What Art Under Trump? in The Nation, reopening an old debate.  Artists, she pointed out,  have often been lectured on their moral duty.  Atwood didn't invoke The Metamorphosis Of The Gods by Andre Malraux, but she could have.   Malraux traced the path taken by the divine aura from the ancient world to art museums as our relationship to the divine has been transformed into a a veneration of objects. And so, the sacralization of contemporary art is about money.   Paintings, books, theater, and films, are not inherently sacred, no matter what price  they command in the marketplace, although they have in the past served religious  functions, in ancient Greek theater and medieval cathedrals, to name two instances. 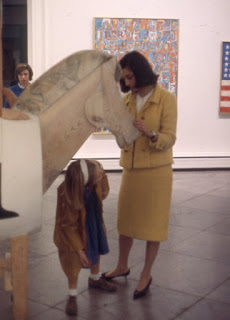 A recent bequest to the Albright-Knox Gallery in Buffalo is good news at a bad moment.   When Marisol Escobar died last year, she left  more than 100 of her sculptures, some 150 works on paper, thousands of photographs and slides, and a small group of works by other artists that she collected to the Albright-Knox. The bequest also includes the artist’s archive, library, tools, and the artist's New York City loft apartment. The sale of the apartment, worth an estimated $4 million to $5 million, will bolster the art gallery's operating endowment.
Why the Albright-Knox Gallery, located some 450 miles from New York City, the place where Marisol lived for decades?  It was the first museum to acquire Marisol's work for its collection when Seymour Knox purchased The Generals in 1962.  The artist and the museum director became  friends, with Marisol making frequent appearances at  openings and events there. "She was incredibly grateful to Mr. Knox for his purchase of The Generals and Baby Girl" said Carlos Brillembourg, Marisol's longtime friend and co-executor of her estate with Mimi Trujillo.  Baby Girl  also  became an instant hit when the museum purchased it in 1964.  The little girl (who is very big) dwarfs her tiny doll-like mother.  And Marisol had another link with the Queen City: throughout her career,  Marisol was represented by the gallery of Sidney Janis, a Buffalo native. 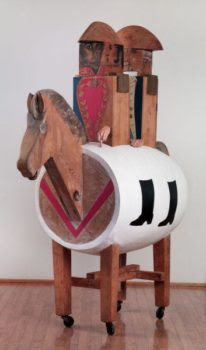 I have had to crane my neck to get a good look at Simon Bolivar and George Washington  whenever I visited The Generals;  it stands seven feet three inches tall.  The brightly painted wooden sculpture evokes a smile and memories of toy soldiers, but there is serious business going on here.  Washington and Bolivar were both leaders of independence movements in the Americas, but their imagined appearance together suggests a  satirical viewpoint; these mounted leaders with their feet hanging in air may be out of touch with reality.  A Marisol sculpture, I soon recognized, is always about more than one thing at a time.


About Marisol there is the lingering sense that her successes as an artist were never commensurate with her achievements.  Born Maria Sol Escobar in Paris in 1930 to Venezuelan parents, she grew up in a cosmopolitan setting, on three continents, possessed of   unusual talent, encouraging parents,  and great beauty.  When her mother committed suicide the eleven year old Marisol stopped talking.  "I really didn't talk for years except for what was absolutely necessary....Iwas into my late twenties before I started talking again - and silence had become such a habit that I really had nothing to say to anybody."

Marisol arrived in New York to study painting with Hans Hofmann in 1951, but she soon turned to making three dimensional figures as "an act of rebellion."  She  found the props she needed for her sculptures,  "I did my research in the Yellow Pages."
Sizing up the male art world of Abstract Expressionism, she learned to navigate its prejudices, her silence protecting her in some way.  "Everything was so serious.  I was very sad myself, and the people I met were so depressing.  I started doing something funny so that I would become happier - and it worked.  I was also convinced that everyone would like my work because I had so much fun doing it.   They did."  As for her glamorous public persona, Marisol claimed disinterest. "I don't feel like a myth. I spend most of my time in my studio."

However, 1956 was a year that called on her deepest reserves.  In August Marisol, along with Alfonso Ossorio, Clement Greenberg, and Conrad Marca-Relli  were called from the city to East Hampton to identify the body of Jackson Pollock who had killed himself and a young woman in a  daredevil  stunt that turned into a drunken driving accident.   Then, after the Hungarian uprising against a communist government was ruthlessly crushed by Soviet tanks as the world watched on television, Marisol had created a series of wooden sculptures she named The Hungarians; when it was featured in Life magazine, the  artist sitting surrounded by the wooden figures struck a raw nerve.  The figures seemed to interrogate the viewers, asking 'Why did they see but not help us?'

At her left was a family on a wheeled platform that could have been a train or perhaps a bus.  An image of attempted escape is implied; a mother cradles an infant while the father stands behind a toddler, but where will they go?  The Soviet Army had recently invaded Hungary and  the world  watched in horror but failed to respond to tanks rolling through the capital city Budapest, crushing bodies and spirits as they went.  Surely it is no accident that in Marisol's work, the people who are trapped are looking at us.

Because the art world caught up with Marisol in the 1960s, her work has often been pigeon-holed with pop Art - and left there when styles changed - but her work has not dated.  Her astute mimicry of human behavior was much deeper than any silk screen of a soup can.   Dubbed a "Latin Garbo" for her beauty, the feminist nature of her social critique has  become clearer with time. 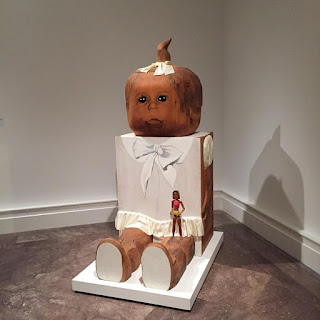 “Marisol was an important figure, subtly affecting change by her silence and the particularity of her position … She was the female artist star of pop art, [but] she dramatized it in a very subdued way, through her intensely quiet manner.” – Carolee Schneeman
“Marisol was among the most highly respected artists of the 1960s. As the decades passed, she was inappropriately written out of that history. My aim was to return her to the prominence she so rightly deserves.” – Marina Pacini, curator, Memphis Brooks Museum

In 2014, the Museo del Barrio was the first New York museum to present a solo  exhibition of Marisol’s work.

Posted by Jane Librizzi at 7:53 AM

The works of Marisol speak to the public in the XXIth century, it's happy that this artist is recognized. Thank you for this post, Jane.

Tania, I think it can be difficult when art is timely to see how it will look in other times. Marisol's work only gains in interest. People (read: men) should never underestimate an accomplished woman, especially one with a sense of humor!