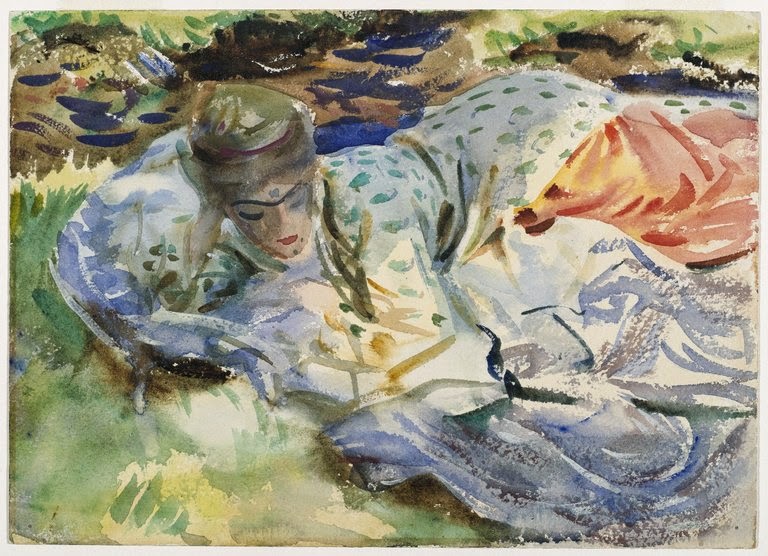 “Sargent's work has its limitations, but they are largely set by its qualities.  If a transcript of life is to be made vivid, with all its hanging effects struck instantly  upon the canvas, there can be no brooding and musing and dreaming.  The surface of the paint is smooth and flowing, the color is brilliant and pure, but neither have that absolute and subtle perfection that comes when an artist holds his canvas by him, looks at it long and often, searching it, adding a touch here and a glaze there with loving care until it fuses into unity.  The composition likewise has no such absolute perfection.  The figures are usually well place and well grouped, they fit well into the frames;  but after all the composition is taken as nature gave it, with some choice from different poses and some suiting of the dimensions of the canvas to them, but no weaving of light and shade, line, and spot, into a complete decorative arrangement.  His portraits rarely have distinction in their patterning.  This amounts to saying that Sargent is not Whistler.  It has already been hinted that he is not Rembrandt, and it may be added that he is not Raphael.  It is even possible to hint that he is not Velasquez, though he and Whistler have not been claimed as reincarnations of that master.  But he has no need to claim a reflection of another man's qualities, for he has his own and they suffice.
With a certain temperament it is quite permissible to dislike his work, as it is permissible to dislike the work of Rubens; but with all limitations and reserves made, he has talents manifest and unmistakable that give him securely his position as the first portrait painter since Reynolds and Gainsborough.”
– History of American Painting by Samuel Isham & Royal Cortissoz, New York, Macmillan: 1905; 1926.

A century has passed since Samuel Isham delivered that assessment of the American artist John Singer Sargent (1856-1925) and it is hard to imagine anyone capturing the Sargent 'case' better in a few hundred words than this.   But, I cannot resist saying something about Sargent's ravishing watercolors now, as John Singer Sargent: The Watercolors ends its tour at the Museum of Fine Arts in Houston on May 26th. (It opened on April 5, 2013 at the Brooklyn Museum and on October 13, 2013 at the Museum of Fine Arts in Boston.  The exhibition draws on the Sargent collections of these two museums).
Sargent exhibited a large group of his  watercolors at Knoedler Gallery in Manhattan in 1909.  The Brooklyn Museum bought 83 pieces and three years later the Museum of Fine Arts, Boston, acquired its own collection of nearly 50 watercolors. Sargent was fortunate in having the group kept together, more or less as he wished. Viewers of the ravishing exhibition John Singer Sargent: Watercolors (Brooklyn, Museum, Boston Museumof Fine Arts, Houston. Museum of Fine Arts) have been able to see the paintings exactly as the artist intended.
No artist in recent decades that I can think of has captured the sweetness of doing nothing, or dolce far nients, as it is called in Italian, better than Sargent.  To let your mind wander, without experiencing boredom, to savor idleness withiout guilt at eschewing physical exertion: all this strikes us a mirage of luxury, even though it is more available to us than it was to our ancestors.

“Don't worry at all about my stay here; I feel perfectly well; I live here in my own fashion; I stroll frequently; I read, I have nothing to do, and although in no way lazy by occupation, bo one is more affected than me by the farniente of the Italians.”
- Madame de Sevigne (1626-1696) n to her daughter Francoise,  Madame Grignan, in a letter dated 16 September 1676,from her country home Les Rochers in Brittany.
An influential intellectual and author of voluminous correspondence, the Marquise de Sevigne had been left a widow at age Netty-five and the mother of four fatherless children.  I can't help but think that under such circumstances even an aristocrat would need extraordinary energy to both accomplish as much as she did and to be able to relax and enjoy life.
For Sargent, relaxation was travel and vice versa.  He often traveled with a retinue, including several nieces and the daughters of friends. One of them posed for Zuleika (at top) in a costume Sargent found somewhere in the Middle East.  The  name Zuleika has  a history in biblical and Arabic literature.  In Christian telling, Zuleika was something of a villainess fir her attraction to her manservant Joseph but according to Rumi, her love was a manifestation of the human longing for God. What Sargent shows us is the harmony of disparate pictorial elements, the red Turkish-style pantaloons, the green and white silk overdress, the blue shawl, and a lightly skteched but evocative face, eyes on her book or lost in thought. 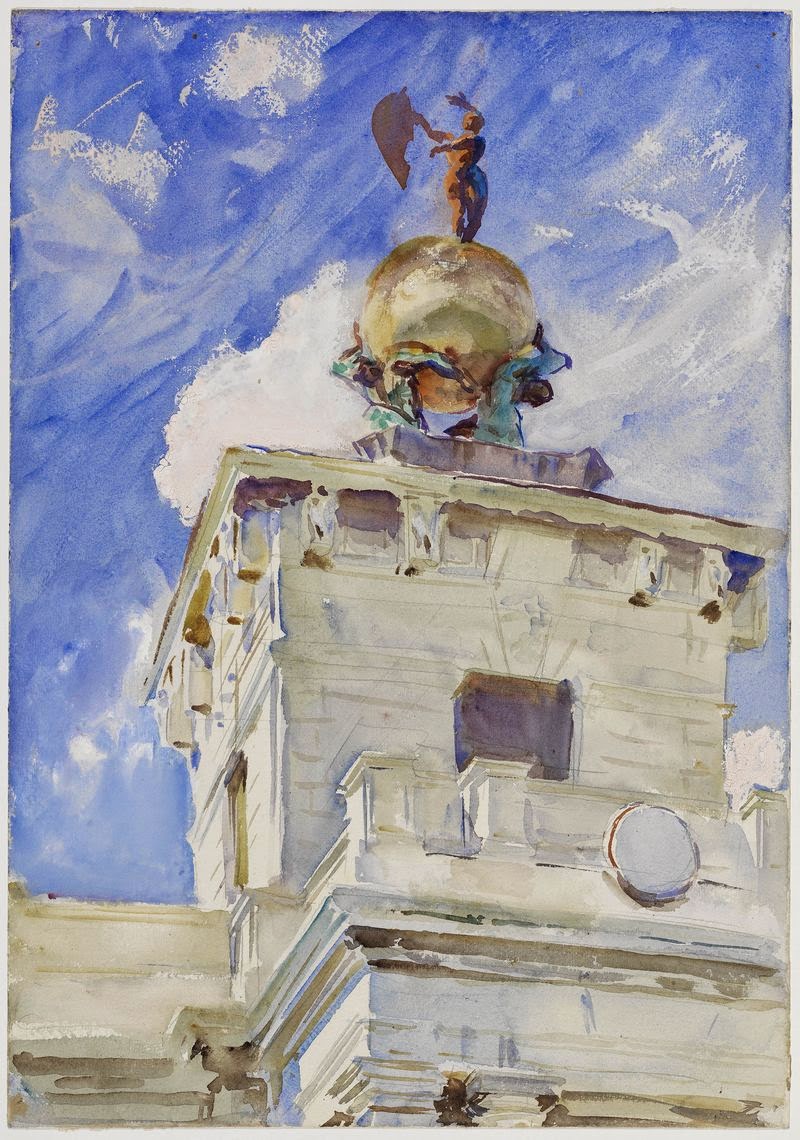 Critical opinion has not always been kind to Sargent. The argument is partly  retrospective  - he is like us but we don’t always like ourselves.  Aspects of modern life that we view with ambivalence originated in his time. The advent of mass tourism has cheapened the experience of travel.  Amateur watercolorists have dulled our eyes to his mastery.


Is Sargent modern enough for us?  He painted seemingly without restraint, and made no academic attempts to conceal his techniques or how he arrived at his effects. His gaze, if you will, is more of a fleeting glance, as we experience all things at a faster pace. Mountain Fire  verges on abstraction, vapours  shroud the Alpine landscape  by Sargent's wet washes that obscure their sharp edges


Samuel Isham (1855-1914) was a figure painter from New York City.  He graduated from Yale University in 1875 and studied at the Academie Julien (1883-1889) ith Boulanger and Lefebvre  from 1883 to 1889. The first edition of his  History of American Painting was published in 1905.   Isham's book was praised for his “just appreciations and pleasing style.”
When Macmillan published a revised edition in 1926, it included additional chapters by Royal Cortissoz.  The choice of Cortissoz may have rested on his reputation as a critic but Cortissoz, was hostile to modern art, so his chapters form an odd coda to a magisterial work.

Addendum: 05/ 23/ 14.
Sargent never painted Edith Wharton's portrait but he did paint a number of her friends, including Ralph Curtis (1880), Lisa Colt, later Mrs.Ralph Curtis (1898) and Henry James (1913).   After the publication of her novel The Custom of the Country in 1913 whose character the society portraitist Claud Walsingham Popple was widely accepted as a thinly veiled portrait of Sargent, that was no longer a possibility if it ever had been.  In her private journals, Wharton had written, "Saregnt is the only artist I can think of who has the techniques of genius without its temperament."
Wharton knew art and she knew artists.  In her later years, she spent a great deal of time in Europe with the art historian Bernard Berenson and the young Kenneth Clark.  Most of her stories about art, however, come from her earlier years as a writer.  The Temperate Zone (published in Here And Beyond, 1924) was an exception. The Muse's Tragedy and The Portrait appeared in her first collection The Greater Inclination (1899).  Included in her second collection Crucial Instances (1901) were The Moving Finger and The Rembrandt.
A delicate situation worthy of a Wharton story ensued after Wharton published The Verdict in 1908.  Her friend  the portrait painter Ralph Curtis was convinced that the second rate artist featured in that story was Wharton's verdict on his own career.  I can imagine that the character of the novelist Mrs. Dale, who appeared in the story The Copy that appeared the same year in her collection Tales of Men and Ghosts (along with The Daunt Diana), spoke for Wharton when she said, "I foresee the day when I shall be as lonely as an Etruscan museum." 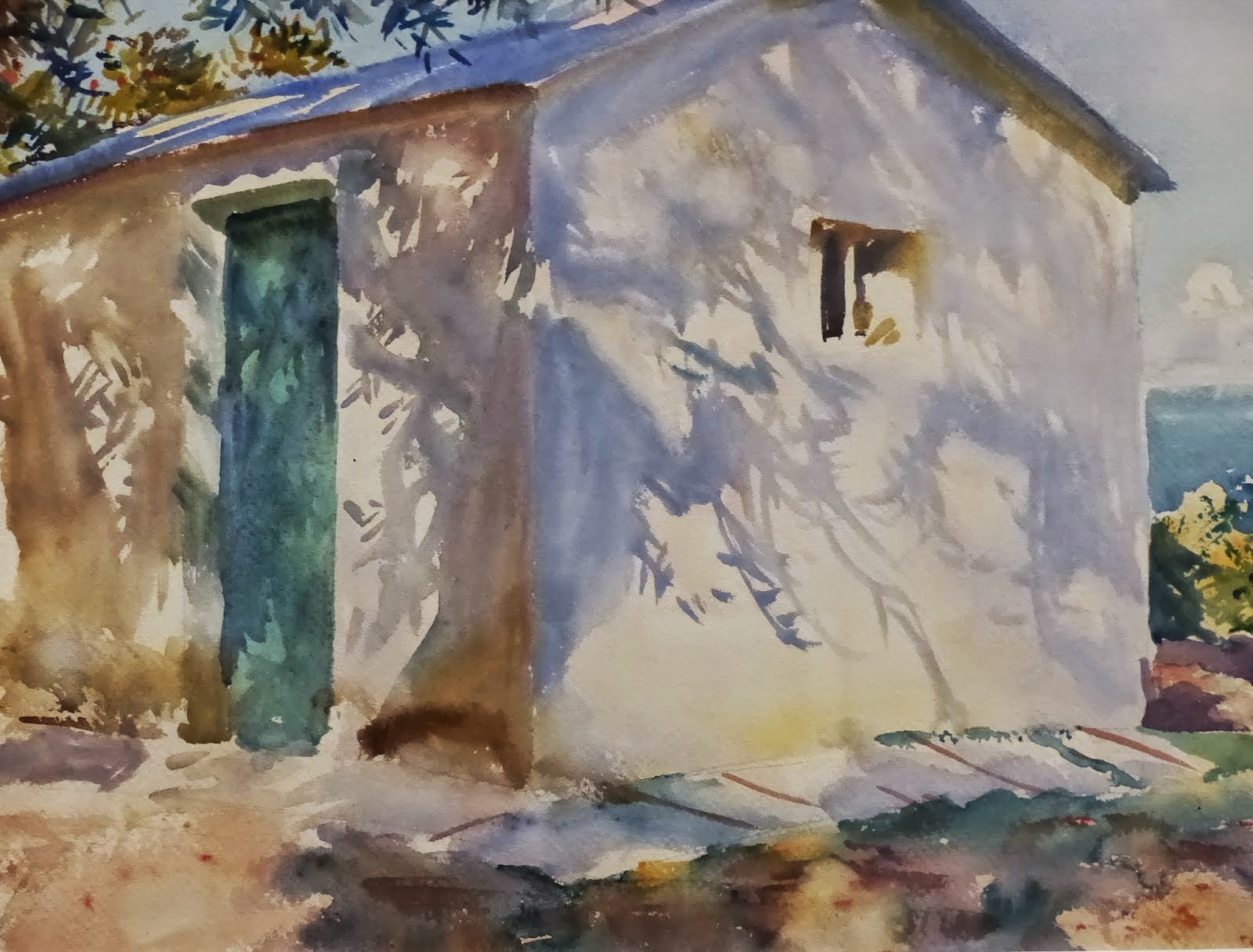 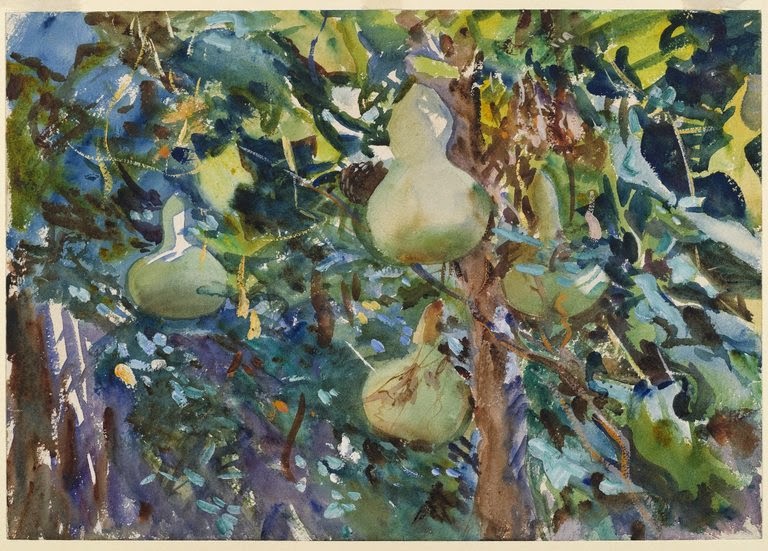