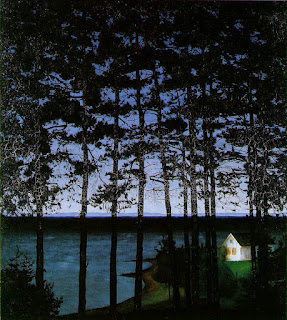 "You build a house for your soul,
and wander proudly
in starlight
with the house on your back,
like a snail.
When danger is near
you crawl inside
and are safe
behind your hard

And when you are no more,
the house will
live on,
a testament
to your soul's beauty.
And the sea of your loneliness
will sing deep
inside."
- "Conch" translated from the Norwegian by Robert Hedin 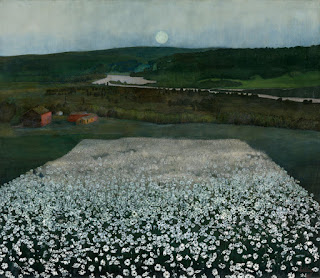 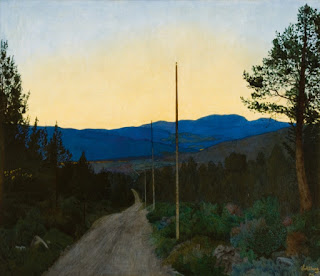 "Not by car,
not by plane -
by neither haysled
nor rickety cart
- or even Elijah's fiery chariot!

You' never get farther than Basho.
He got there by foot."
- " Not by Car, But by Plane" translated from the Norwegian by Robert Hedin

Olav Hauge (1908-1994) was a poet, a translator, and a horticulturalist, whose writing made a mark on the literary and geographical landscape of his country.  Widely read in European literature, Hauge was also a prolific translator of works from German (Heym, Trakl, Brecht, and Paul Celan, from the French (Mallarme, Rimbaud, Verlaine, Michaux, and Rene Char) and English (Blake, Browning, Tennyson,Yeats, and D.H. Lawrence).  The German romantic Friedrich Holderlin whose blend Greek  mythology and pantheistic mysticism beguiled Hauge, permeated his inner life, so deeply so that Hauge sometimes lost his footing in ordinary life.  When that happened Hauge suffered psychotic episodes, spending several years in a mental hospital during his twenties.

For most of his life Hauge lived alone in a small house filled with books; only in 1978 did he finally marry Bodil Cappele, an artist. he loved books so much so that he wanted to share them with his neighbors, mostly farmers and laborers who had little time for reading.  Often when one would drop in he would pull a book off the shelf, saying "No doubt you've read this..."

Trained in horticulture at university, Hauge tended a small orchard.  Although the Hauge family owned a large farm, Norwegian custom dictated that the bulk of it go to Olav's older brother so the younger one received just three acres on which he grew apples.  And though he loved apples, he loved literature more.  Hauge's first poems were published when he was thirty-eight years old. Something in the grandeur of the green mountain landscape of western Norway found a correlative for Hauge in the poems of the 8th century Chinese poet Li Po.  Hauge's  Journals, kept from 1924-1994 and published after his death, reveal a man of extraordinarily broad culture.

When Hauge died his body was carried uphill by a horse drawn carriage for burial in the Ulvik cemetery.  Those who attended the funeral reported that the carriage was accompanied by a colt and its mother who trotted gaily alongside the casket all the way up the mountain.  I like to think that Li Po was with them in spirit..


Harald Sohlberg (1869-1935) is the other great Norwegian artist, the one who did not paint The Scream. Although reasonably contemporary (Edvard Munch lived from 1863-1944), Sohlberg painted the Norwegian landscape in a somewhat romantic style; contra that his use of color is clear and neat, reminding my of the contemporary American Alex Katz.  Munch has been judged the more modern of the two for his expressionist style and febrile temperament.  Both artists disdained comparisons of their works with those of other  artists.  Hauge is  a modernist, his poetry spare and concrete in style - and yet Sohlberg's landscapes strike me as  a visual equivalent in their rendering of the unique character of northern light.


Thank you so much for the detailed article.Thanks again.

You are welcome, C.P. I'm happy that you enjoyed the piece.

I should have mentioned the book "Edvard Munch and Harald Sohlberg: Landscapes of the Mind" by Oivind Storm Bjerk published by the National Academy of Design in 1995. It's a revelation - at least it was to me.

So much depth in this one, dearest Jane! Thank you for mentioning Li Po!

Rouchswale, it's always nice to mention Li Po. And it's rewarding to be able to share Olav Hauge's work that I just chanced to discover at the public library, thanks to the Dewey Decimal System