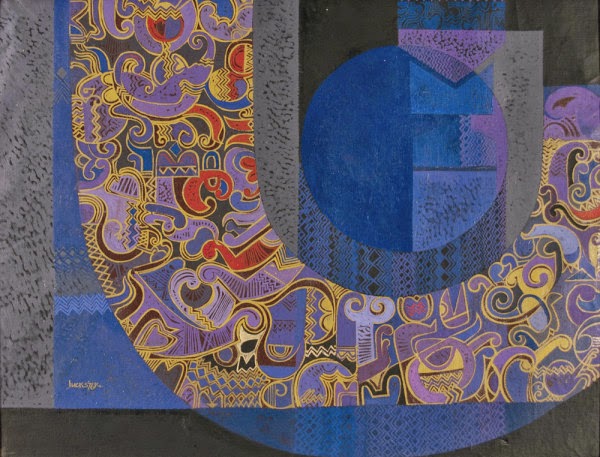 Kierkegaard said that we live life forward but understand it backward; that's also a good description of how we respond to works of art, although it is not how we are expected to write about art, if we do.
Recently I saw Crescent (above) for the first time. Although I knew nothing about the artist and not much about eastern Asian art, the painting made me think of the Dutch artist Jan Toorop and how his Indonesian childhood influenced his art. 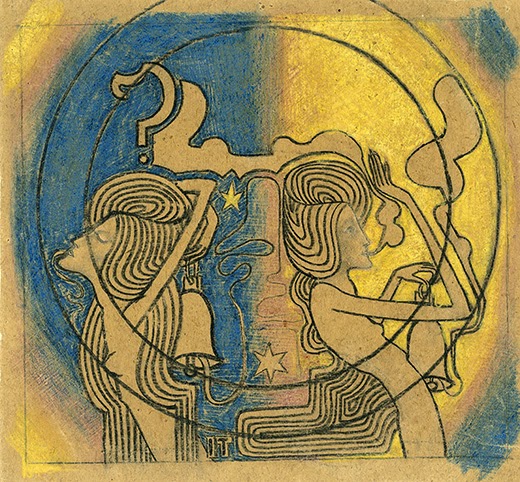 Jan Toorop (1858-1928) was born at Purworejo in central Java where his father was a clerk for the Dutch colonial government that ruled the Indonesian archipelago during the 19th century.  His mother was half Chinese. The Toorops were descended from  Belanda Hitam or Black Dutchmen,  soldiers recruited from  the Gold Coast of Africa (now Ghana), also a  Dutch colony.  It would be anachronistic to call either the Toorop family or Indonesian art ‘multi-cultural’  but contemporary art historians are scrambling to understand the multiple sources of existing artworks or else ignoring them in the hope that they can continue their claustrophobic and deeply exclusionary dialogue undisturbed.

The Toorop family returned to the Netherlands so Jan could study art but  the young Toorop found  the avant-garde artists of Les Vingts in Brussels more congenial than the academic painters at the Amsterdam Academy.  During the period when he lived in Brussels (1882-1886), Toorop became friends with the prickly Belgian from Ostend, James Ensor, and the two traveled to Paris together to check out the latest developments in French art.   In 1886 Jan Toorop married Annie Josephine Hall  a woman from Sligo, Ireland.  Their daughter Charley Toorop was born in 1891; the subject of numerous paintings by her father, Charley Toorop grew up to be an artist herself.
For Toorop, European culture became an addition; his work already had a story to tell that had been inspired by the art he had been exposed to as a child in Indonesia. Like Vincent Van Gogh, Toorop became a socialist sympathizer after observing the people at work in the slag heaps of the Borinage, a horrific landscape more vivid than any hell imagined by the Symbolists.  He read their poetry in books by  Maurice Maeterlinck and Emil Verhaeren, like the rest of his generation.  These names loomed large in international circles; Maeterlinck would win the Nobel Literature Prize in 1911 and contemporaries would not have been surprised if the prolific Verhaeren had done the same. 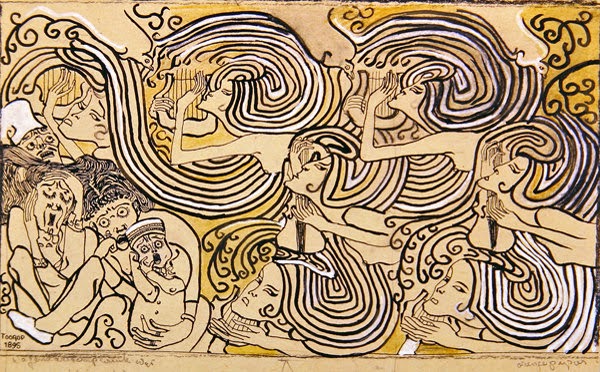 We could view the sirens in Toorop's Shipwreck as an example of Art Nouveau, and a bold example at that, but Toorop's visual vocabulary had its roots in wayang kulit, the Javanese art of puppet theater.  It is one of the oldest known forms of performance art in the world. Wayang held a place of high honor at the royal cours and at rural festivals alike.  Wayang beber, a variation, substituted a painted scroll for the puppets; against this background a narrator told a story to the musical accompaniment of a gamelan orchestra. Kulit puppets were flat characters, mounted on bamboo sticks, their faces chiseled in great detail in rhythmic patterns  by hand.  Their attraction for Toorop, an artist of outstanding draftsmanship, seems obvious.  The amassed interlocking human forms that Toorop often employed for his prints have their ancestors on the scrolls and, like their predecessors, what may appear at first as chaos is quickly resolved into a harmonious group by the use of strong lines.

The connection between Jan Toorop and Crescent, at least in my imagination, is there also in another Javanese art - batik.  Of ancient origins, batik making reached its zenith in Indonesia where, not incidentally, the 19th century Dutch immigrants became involved in its production.  The techniques used for transferring  designs to cloth are similar to those used in lithography, seen here in Toorop's work.  To make a design in batik, wax is applied to  areas of the cloth, color is applied to the whole cloth, and then the wax  is scraped off, revealing the completed pattern.  In,lithography, chemicals are applied to to discrete portions of the stone stone or wood block; sometimes incisions are made directly into the surface.  Again, a multi-step process allows layers of colors and lines to be built up sequentially by the artist.  Those who dismiss these arts as minor in comparison to painting with oils ought to give it a try.  And yes, the dominant colors used in batik are indigo blue and warm brown. 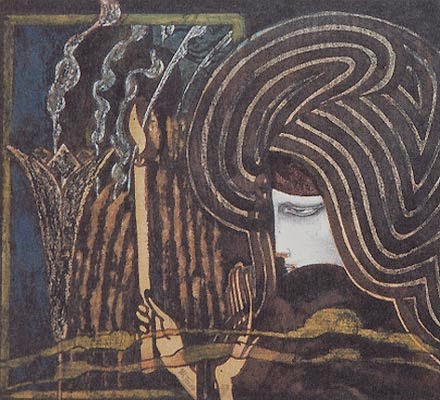 I ignored all this Javanese part in Jan Toorop's work which painted beautiful landscapes and portraits in Belgium.
A discovery, thank you Jane.

Tania, me too. It wasn't until I saw the Sjarifuddin Luckman painting that I realized what was so unusual in Toorop's work. What he saw at a young age made a strong impression on him. You can almost feel him trying to convey the music and movement in his work!