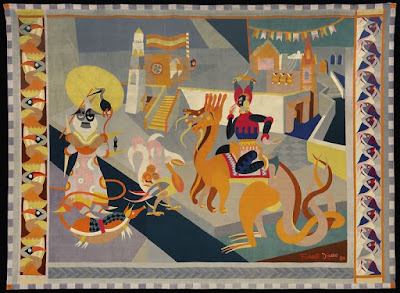 I.
With its unkempt garden, its vast rooms, its fine
seventeenth-century balconies decked with greenery,
the villa seems cribbed from certain verses of mine,
a model villa, a piece of postcard scenery ...

It thinks of its past to ease its present gloom,
of jolly gatherings under ancient oaks,
of legendary feasts in the dining room,
and dances in the great hall, now stripped of antiques.

For where, in better times, the Ansaldos called,
or the d'Azelglios, or this or that contessa,
some motorcar now jerks up, its tires bald,
and hirsute foreigners batter the Medusa,

First comes a bark, then footsteps, then the lazy
creak of the door ... In that hush (think cloister or tomb)
lives Toto Merumeni with his ailing mum,
a grizzled great-aunt and an uncle who's crazy.


"Toto Merumeni," taken from his second  collection I colloqui (The Talks, 1911), looks in the rear view mirror like a precursor of "The Love Song of J. Alfred Prufrock."   (I should point out that although T. S. Eliot was working on his "Prufrock" at the same time, it did not appear in print until 1915.)  Whereas Guido Gozzano (1883-1916) spent most of his life in his native Turin, tried to study law at the university but dropped out, more attracted by evening literature lessons (Crepusculari Torinesi),   There he found an alternative to the pervasive and baneful influence of  conservative poet Gabriel D'Annunzio  through immersion in Dante, Petrach, and Leopardi.  From these illustrious examples he crafted a pessimistic but spiritual vision of a vaguely socialist future.   He died at age thirty-two from tuberculosis.

T.S. Eliot called "Prufrock" (1911)  his first perfect poem; leaving aside any quibbles about that definition, it is still a poem most poets would be happy to claim as one of theirs.  It was "Prufrock" that attracted the attention of another  - already successful - American expat - Ezra Pound.

These two characters, Toto Merumeni and J. Alfred Profrock, are decidedly older than their  fledging creators (Prufrock worries that women will ridicule him for his baldness) but both share a wariness in the face of material progress accompanied as it is by changes in social relations, not least between women and men.  If no one has yet done a doctoral thesis comparing these two poems...

My favorite catch-all definition of free verse  has been attributed to the Englishman Richard Aldington (1916) who described it  a based on cadence, that is  "(I)t is the sense of perfect balance of flow and rhythm.  Not only must the syllables so fall as to increase and continue the movement, but the whole poem must be as rounded and recurring as the circular swing of a balanced pendulum."   That last bit really ups the ante on a poet.  While Eliot admired, with some reservations, Walt Whitman's versification, he was deeply moved by the example of Jules Laforgue (1860-1887), a short-lived poet (Laforgue was born in Uruguay to French expatriates but moved to France as a child). Laforgue was the first French translator of Walt Whitman so there is simpatico at work here.  Both the Symbolists and the Impressionist schools of French poetry have argued over  custody pf Laforgue for several times longer than Laforgue's own life.

As for our two imaginary gentlemen,  they appear like the Roman god Janus, fated to look both ways, to the future and the past.

I like this poem and also the illustration.
Best wishes for the New Year, Jane.

Tania, Happy New Year! I was so elated when I discovered "Toto Mermumeni". How could something this interesting be so difficult to find!

http://thebluelantern.blogspot.com/2014/03/the-summer-before-dark-giorgio-bassni.html I hope this link works. The date s March 23, 2014.