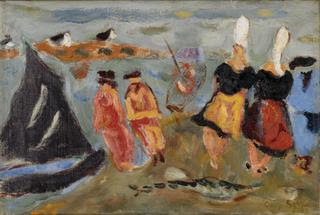 I. We see men and women standing on a shore, symbolically separated by a boat that seems to be taking on water.  Drowning in the choppy, unpredictable waters of the Atlantic was a constant worry, especially to the families  of the fishermen waiting at home on the Breton shore.  Outsize gulls perch on the shoal at the upper left of the canvas, a nice touch to remind us that this painting aspires to something other than literal representation. In is a Fauvist gesture, Luigi Settanni  has uncoupled  color from its descriptive task, freeing it to express the painter's emotional reaction to his subject.

The tall white headdresses the women wear are traditional Breton coiffe. headdresses  made of lace: Although differing in style from town to town, the caps signify the age and marital status of the wearer;  the ones pictured here are called Bigouden, a tall cylinder of starched lace recognized throughout France.  Dressed in the traditional costume and decorative apron, they are known  as bigoudiennes.  This tells us that we are in the vicinity of Pont l'Abbe near the Bay of Audierne on the south shore of Finistere. And although northwestern France has been settled for millennia, the Bigoudien is a relatively recent sartorial invention.

Port Manech on the coast of Brittany is part of Finistere, the westernmost Department of France that derives its name from the Latin Finis Terrae meaning end of the earth. Jutting out into the Atlantic Ocean, surrounded on three sides by water, Finistere is remote in many ways.  This is the area where the Breton language has survived most strongly; five per cent of the population  speak Breton rather than French. The countryside is rugged, owing to its rocky soil.

II. In Landscape in Brittany - Pont l'Abbe figure (below) Settanni paints the ground blue, as if to remind the viewer that the sea dominates every corner of Breton life.  This makes it appear as though the sea has jumped the stone wall to surround the houses. The figure of the woman reminds us that while the men were away on fishing expeditions, the women waited at home and watched the sea. Thickly applied strokes and daubs of paint lend richness  to a scene that some dismiss as impoverished and lacking in interest. 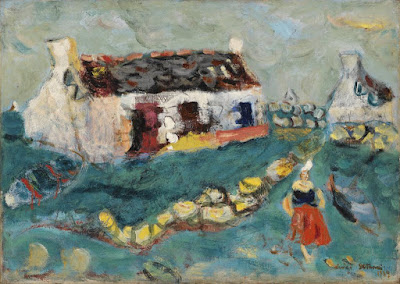 III. I have not been able to unearth much information about Luigi Settanni (August 21, 1908-1984) other than that he was born in Italy and moved to the United States in his twenties. He enrolled at the Philadelphia Museum School (now the University of the Arts) and went on to study at the Barnes Foundation in Merion from 1933-1941, where he became a protege of Dr. Albert C. Barnes. We can infer that Settanni did not have much money and that opportunities to study art could have drawn him to emigrate.

Settanni was able to visit Morocco in early 1935 on a Barnes scholarship. There are eleven paintings by Settanni in the collection of the Barnes Foundation, all made before 1940.   On the evidence of the paintings, he spent considerable time in northern France,  circa 1938-1939. Presumably, it was the outbreak of World War II brought him back to the States. His paintings, even those that portray life in the hard-bitten fishing villages of Brittany, are full of joie de vivre.

Luigi Settanni at the Barnes Foundation

I didn’t know him at all.

Tania, recognition for an artist is like a throw of the dice. I wish I could have found more information about Luigi Settanni but at least here are some paintings to enjoy in the summer.