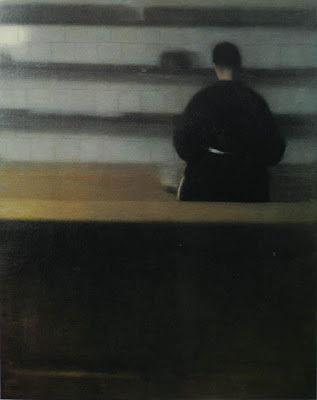 After all the talking in the audience dies down, one can begin to make out some whispering voices from behind the screen.    Then a couple of footsteps can be heard, something that is dropped on the floor, a door  that slams shut.  For a while there is silence, then the whispering voices can be heard again, and like this it keeps alternating between the silence and the sound of voices.  When on the way home I complain how there wasn't a movie, I'm informed I lack imagination.  "It isn't people when they are fictitious, who have my interest," I try to explain, but of course in vain.  The one we talk to, when we talk to ourselves, always gets the last word.
- "Movie Theater" by Carsten Rene Nielsen

At the back of the store, where dusty porcelain was piled from floor to ceiling, I found a plate so deep that one day in my kitchen by accident I dropped  an entire cauliflower into it, and I didn't  find it again until days later,, as I, crawling on all fours on the bottom of the plate, reached the edge, where in a radiance  and as far as the eye could see, hung thin, white curtains calmly waving back and forth, as if it were the room itself that was teetering from side to side.
- "Plate" by Carsten Rene Nielsen

Carsten Rene Nielsen's poems take flight from his neighborhood in Aarhus, the second largest city in Denmark, located on the east coast of the Jutland peninsula.  In Nielsen's giddy vision Aarhus is a place where comedic errors lie in wait, where questions go without answers, and stairways and alleys lead anywhere but to the expected terminals.   Nielsen's prose poems take everyday urban places,  florists,  department store fitting rooms, sidewalks, and objects we take for granted such as garbage cans, shoelaces, shirts, and the daily mail and get them up and involved with humans in surprising ways.   The dish may not run away with the spoon, as in the nursery rhyme, but it may entrap an unwary shopper.  A little bit of fear but more magic is created.  Modern, in the sense of being stripped of decoration, surreal in defying the conventional laws of physics, Nielsen's world becomes a recognizable place by the end of Household Inspections.

Vilhelm Hammershoi's painted world also often focuses on domestic settings.  An early example,  A Baker's Shop, is surely an edited version of  a patisserie, its lines and neutral colors going against our expectations of plenitude.  By implication the baker is an acolyte tending a floury altar to the staff of life.  By contrast, during the same year Gauguin was painting bright blue trees at Arles and Van Gigh was working on two versions of his starry nights.